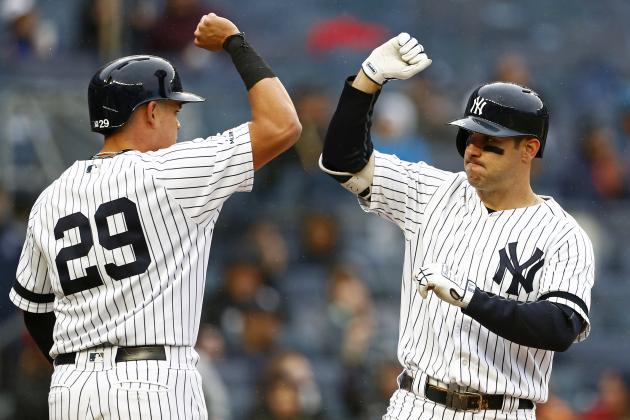 Adam Hunger/Getty Images
Where would the Yankees be without Gio Urshela and Mike Tauchman?
1
Read
0
Comments

Who needs Bryce Harper or Manny Machado when you have Gio Urshela and Mike Tauchman?

This is just about the unlikeliest train of thought imaginable, but here we are. Or, more accurately, here are the New York Yankees getting far more than they bargained for out of those two unusual suspects.

As a fill-in for the injured Miguel Andujar at third base, Urshela has put up a .969 OPS, 18 home runs and 3.1 wins above replacement in 100 games, per Baseball Reference. Tauchman has posted a .955 OPS, 12 homers and 3.3 WAR in 67 games, mainly in place of the injured Giancarlo Stanton in the outfield.

Their contributions have meant a great deal to a Yankees club reeling from many more injuries than just Andujar's and Stanton's. Their 80-41 record is the best in the entire American League.

Our Slugger of July has kept rolling through August 🔥 pic.twitter.com/d7uBUxCxGg

The Yankees' current timeline would look different if they'd caved to pressure from fans and pundits and signed Harper or Machado over the winter. But by neglecting to do so, they saved themselves a whole bunch of money and ended up with superior production anyway.

After their seemingly interminable stays on the free-agent market, Harper landed a 13-year, $330 million deal from the Philadelphia Phillies, and Machado ended up with a 10-year, $300 million contract from the San Diego Padres.

Despite their 10 combined All-Star honors, neither superstar is providing immediate returns in 2019:

Urshela and Tauchman, meanwhile, are both pre-arbitration-eligible players who are only entitled to Major League Baseball's minimum salary of $555,000.

Granted, it's not a heartwarming story that a franchise worth $4.6 billion, per Forbes, is getting two nice discounts. We're also not trying to imply Urshela and Tauchman are part of a 4-D chess game being played by Yankees general manager Brian Cashman. It's doubtful he ever had big plans for either of them.

Indeed, Cashman barely had big plans for the 2018-19 offseason. The club finally getting under the luxury-tax threshold seemed to be a gateway to Harper- or Machado-sized splashes. Instead, he and the Yankees brain trust maneuvered to simply remain under said threshold with one notable trade and only about $140 million worth of free-agent deals.

DJ LeMahieu, who's an unusual MVP candidate, and Adam Ottavino, who has a 1.71 ERA in relief, have been worth far more than the $51 million for which they signed. For his part, ol' standby Brett Gardner has turned in one of his better seasons for just $7.5 million.

Otherwise, it's been a mixed-bag experience for the Yankees with James Paxton, Zack Britton, J.A. Happ and CC Sabathia. Between that and the huge bite the injury bug has taken out of their roster, they wouldn't be where they are right now if they hadn't gotten a miracle or two.

More so than fellow unusual suspects like right-hander Domingo German and outfielder Cameron Maybin, this is where Urshela and Tauchman have come to the rescue. 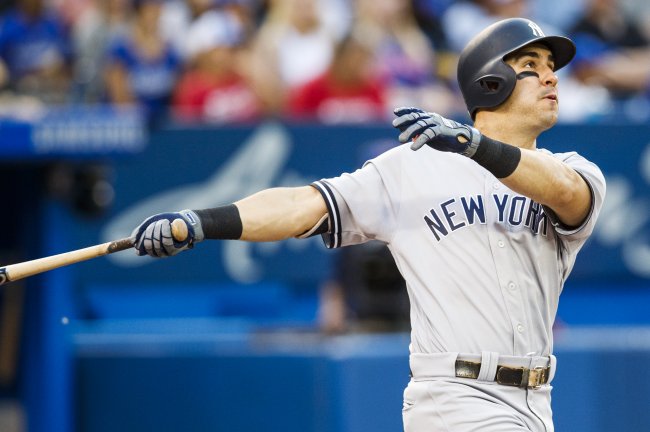 That was with the help of high elevation at home games, however, and he failed to replicate his success in the majors despite similar conditions at Coors Field. In 52 games with the Colorado Rockies, he managed just a .468 OPS.

Between that, his age and an abundance of outfielders at the major league level, the Rockies had cause to jettison Tauchman in a March trade with the Yankees for minor league left-hander Phillip Diehl. In so doing, the Rockies effectively dared the Yankees to do better with him.

To hear Tauchman say it, simply getting a chance to prove himself has been a major key to his breakout.

"Having an opportunity to get in the lineup and contribute to wins, honestly, that's all I think a ballplayer wants is just to try to contribute to that team's win that day," he said, per Erik Boland of Newsday. "It's been going well."

The Illinois native otherwise hasn't needed a major overhaul. He indicated to Ken Davidoff of the New York Post he's merely gotten in tune with the "consistency of his swing path and mechanics" since joining the Yankees.

The degree to which he's succeeded is plainly visible in changes to his strike zone discipline (i.e. his chase rate) and frequency of hard contact: 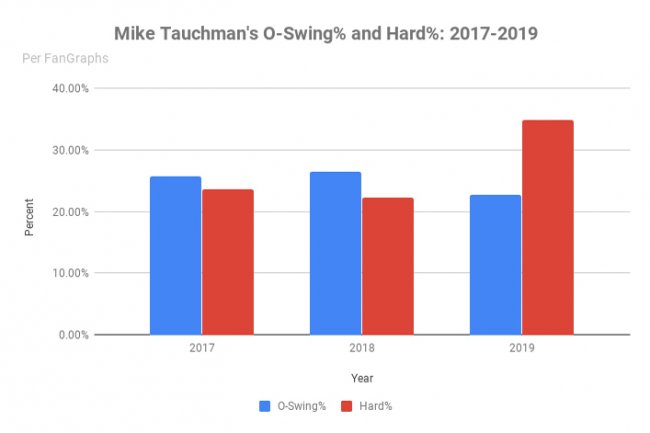 To these extents, Tauchman now resembles a typical slugger. Yet he's more of an athlete than most sluggers, which he's proved by racking up 12 defensive runs saved and highlights such as this one:

On the topic of defense, it was Urshela's glove that paved his way to the majors with the Cleveland Indians, first in 2015 and again in 2017. So despite what his below-average metrics indicate, it's no great surprise he's at least looked the part of a human Hoover at the hot corner.

What's more difficult to square is how a 27-year-old who had a .589 OPS in the majors and a .705 OPS in the minors is suddenly a star attraction for the Bronx Bombers. What, exactly, did the Yankees do to him after claiming him off waivers from the Toronto Blue Jays last August?

Nothing sinister. In fact, it seems to be as simple as a slight tweak to Urshela's stance. As Mike Petriello of MLB.com observed, it's gone from closed to open:

I keep reading about how Gio Urshela has made changes since coming to the Yankees. Not hard to see how his stance has changed since his rookie year, is it. pic.twitter.com/gU3iuCs2Dl

"I'm trying to swing at the ball in the zone, trying to drive the ball more," Urshela said of his newfound approach, per Randy Miller of NJ.com. "I try to hit it with the barrel and keep my hands inside the ball."

Urshela is indeed swinging at more strikes, but the more profound change has been to his hard-contact rate:

Given that their track records as stars only extend as far as the past couple months, it is fair to wonder how long Urshela and Tauchman can keep it up. More to the point: They're probably not actually better than Harper and Machado even though they have been recently.

But for now, it's good enough for the Yankees that Urshela and Tauchman are helping them progress toward what would be their 28th World Series championship. And since neither is necessarily lucking into his sudden stardom, perhaps asking them to keep it up for just a few more months isn't asking too much.