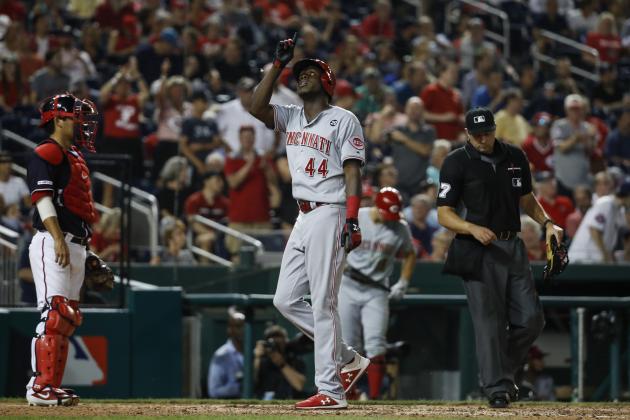 Who knew the Cincinnati Reds' decision to trade Yasiel Puig to the Cleveland Indians would open up a spot in the lineup for the greatest debut of power in major league history?

Reds outfielder Aristides Aquino drilled another home run during Monday's 7-6 loss to the Washington Nationals, with this one coming off relief pitcher Tanner Rainey. According to Eddie Matz of ESPN.com, the slugger became the first player in league history to connect on eight long balls in his first 12 career games thanks to the blast.

This may or may not be a scheduled tweet. 💀#BornToBaseball pic.twitter.com/wu2Mg9ek01

"I think it's the timing," Aquino said. "It's the perfect timing, and God has a plan. I just want to go out there and do the best that I can do."

Matz noted Aquino is hitting .429 with eight home runs and 16 RBI in 11 contests since Cincinnati promoted him. He earned the National League Player of the Week on Monday in large part because of his efforts during a weekend series against the Chicago Cubs that saw him hit four home runs in four games.

Three of those long balls came in Saturday's commanding 10-1 win.

Cincinnati is in fourth place in the National League Central and 7.5 games back of the division-leading Cubs. While the postseason is a long shot, the Reds can at least take solace knowing they may have a future superstar on their hands.