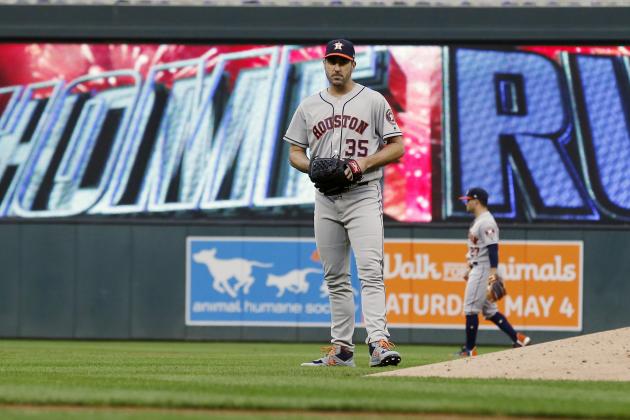 Justin Verlander won't regret his 2019 season if it leads to the second Cy Young Award of his career. And there's a strong likelihood that it will.

All of the home runs will be a shame, though.

The Houston Astros' ace right-hander has given up a whopping 29 homers through his first 25 starts. That's tied with Yusei Kikuchi and J.A. Happ for the most in the American League, and it puts him one shy of his single-season high.

Hence, Verlander is likely to capture his first AL Cy Young Award since he won both the Cy Young and the MVP with the Detroit Tigers in 2011. His case for the award might not be flawless, but it's marked by overwhelming excellence.

And yet the rareness of an ace pitcher being both overpowering and eminently hittable is notable. Verlander will inevitably become only the sixth pitcher to post an ERA+ (a normalized version of ERA) over 150 and surrender north of 30 home runs, and the first since 2001:

Verlander won't be keeping bad company when he joins this club. Roberts, Marichal and Johnson are already in the Hall of Fame, and Schilling is close to joining them. McLain, meanwhile, will probably be the last pitcher ever to win 30 games in a season.

Verlander is far from the only pitcher suffering from acute gopheritis, too. The season's rate of 1.39 home runs per game is by far the highest mark in the history of Major League Baseball.

The common explanation for this is something akin to "It's the baseballs, stupid." And despite MLB Commissioner Rob Manfred's insistence to the contrary, multiple studies (see here, here and here) suggest something indeed isn't quite right with the ball's behavior in recent years.

You know who else suggests that? Verlander himself. 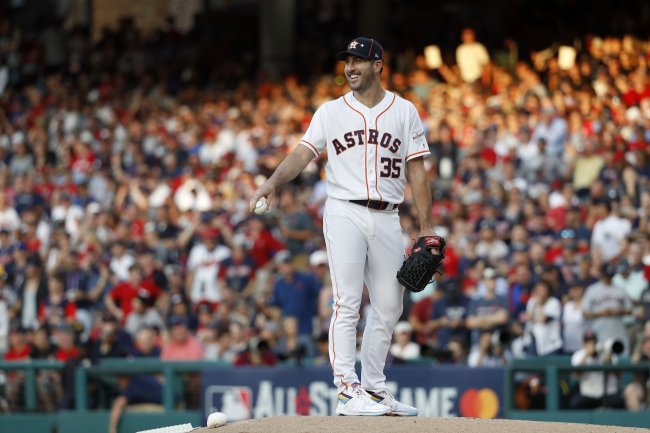 John Minchillo/Associated Press
Verlander at least managed to duck the long ball in the All-Star Game.

The 36-year-old offered some strongly worded doubts about MLB's ownership of Rawlings (which supplies the league with balls) to ESPN's Jeff Passan during last month's All-Star break:

"It's a f--king joke. Major League Baseball's turning this game into a joke. They own Rawlings, and you've got Manfred up here saying it might be the way they center the pill. They own the f--king company. If any other $40 billion company bought out a $400 million company and the product changed dramatically, it's not a guess as to what happened. We all know what happened. Manfred the first time he came in, what'd he say? He said we want more offense. All of a sudden he comes in, the balls are juiced? It's not coincidence. We're not idiots."

Manfred came into power during a 2014 season in which there were only 0.86 home runs and 4.07 runs per game. Offense has steadily risen since then, but the trend does have a tangibly artificial feeling to it in 2019. The 22-point gap between the league's actual slugging percentage and expected slugging percentage is easily the highest since Statcast began tracking such data in 2015.

Put more simply, he's served up his share of cheapies. Heck, Cincinnati Reds announcer even asked "Did he get a cheapie?" in calling Derek Dietrich's 88.2 mph, 339-foot poke off Verlander on June 18:

Yet even in a situation with an obvious spherical culprit, there comes a point when you have to blame the pitcher and credit the hitters.

For his part, Verlander's style isn't designed to be homer-proof. Home runs mainly come courtesy of fly balls, and he's been a fly-ball pitcher for almost his entire career. Balls in the air off him have become even more common since he effectively scrapped his changeup in 2015.

He's a fastball-slider-curveball pitcher now, and one of these pitches has seen a notable increase in home runs per batted ball in 2019: 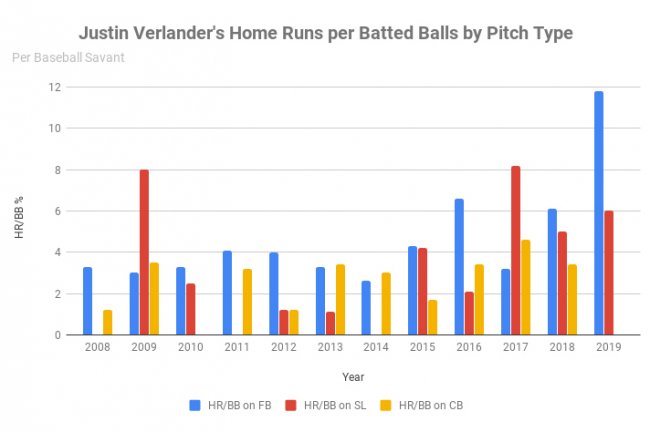 Verlander's breaking balls? They're doing fine. His fastball? Much less so. Frankly, it's been getting crushed.

He's averaging 94.7 mph on his fastball, so this isn't a velocity problem. His fastball's average spin rate is down, but only slightly. The same goes for his heater's overall swing-and-miss rate, and it's even up to a career-high 20.3 percent within the strike zone.

Rather, this would appear to be a location issue.

In keeping with the recommended approach for pitchers during the Launch Angle Era, Verlander prefers to pitch up in the zone with his four-seamer. But as the rest of the league's pitchers have adopted a similar approach, hitters have caught on with a generally upward-trending slugging percentage against four-seamers in the upper two-thirds of zone and beyond.

Verlander used to be exempt from that. That isn't the case anymore: 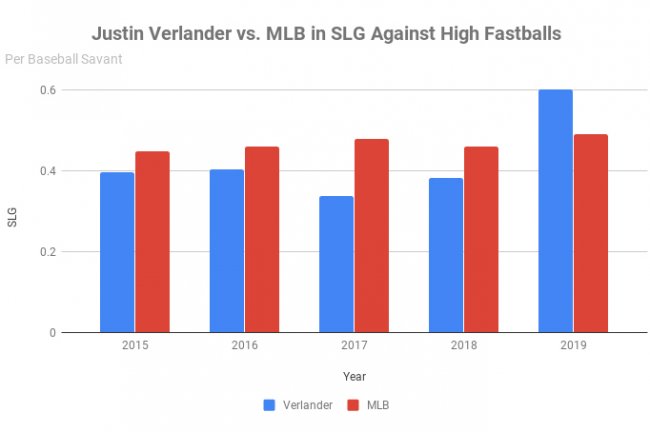 That points to what may be the only knock against Verlander: He's great, but perhaps too predictable.

Or at least, he was.

After being consistently up with his fastball location earlier in the year, Verlander went a little lower in late June and July only to move back up again so far in August. Perhaps it's no wonder that he's allowed only three homers over his last six starts after allowing 12 over his previous five.

As long as Verlander stays on this track, his final tally in the home run column shouldn't derail his Cy Young candidacy. It will merely be a more extreme version of what it already is.

An oddity amid a decidedly odd season of Major League Baseball.

We'd like to send you the most entertaining Houston Astros articles, videos, and podcasts from around the web.