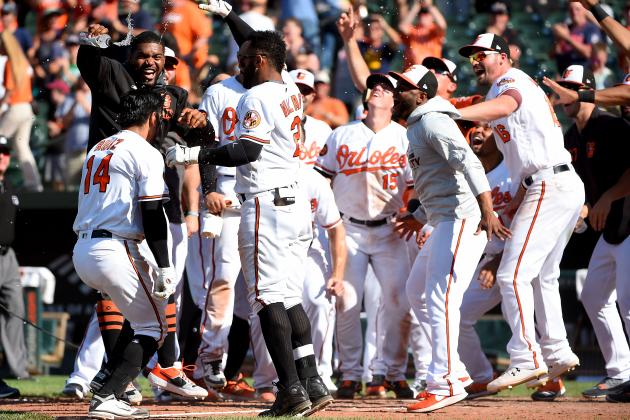 Coming off a 23-2 win over the Baltimore Orioles on Saturday, the Houston Astros were understandably heavy favorites Sunday.

The Orioles scored three runs in the ninth inning to win 8-7, leading to some sizable payouts to bettors.

According to ESPN's David Purdum, Baltimore owned a +420 moneyline, with Houston a -460 favorite at some sportsbooks in the United States. Using a Bet Labs database that tracks betting odds since 2005, the Orioles were one of the biggest betting underdogs to pick up a victory.

Because of the gulf in the teams' respective odds, Purdum wrote the Orioles had 97 percent of the money at Caesars Sportsbook.

Heading into the ninth, the Orioles trailed 7-5 after an error by right fielder Anthony Santander allowed Michael Brantley to drive in two runs and round the bases.

Chris Davis added a run on a sacrifice fly to halve the deficit before Rio Ruiz hit a game-winning two-run homer to right field.

At 39-78, the Orioles own MLB's second-worst record and have little else to play for over the remainder of the year.

But that won't stop them from occasionally making life a nightmare for oddsmakers.

We'd like to send you the most entertaining Baltimore Orioles articles, videos, and podcasts from around the web.