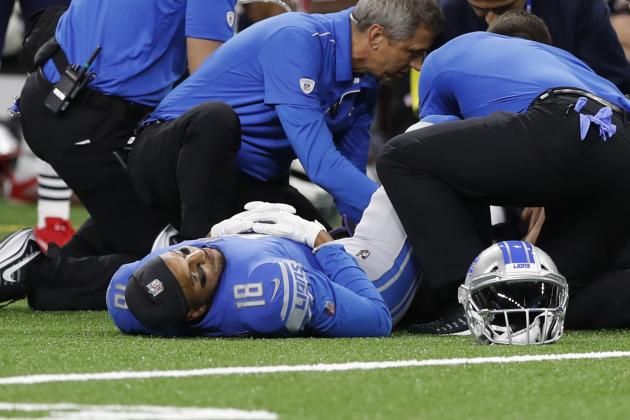 Ian Rapoport of the NFL Network reported Kearse broke his leg, and also suffered injuries to his ankle, calling it a "brutal injury."

Trainers covered Kearse's lower leg with a towel and then applied an air cast, according to The Athletic's Chris Burke. The 29-year-old's injury happened while blocking for Lions running back Ty Johnson. Patriots safety Terrence Brooks dove for Johnson but instead crashed into the back of Kearse's leg.

NESN's Zack Cox relayed that Patriots defensive end Michael Bennett went onto the field to support Kearse before the receiver was carted away. The two played together in Seattle from 2013 to 2016, winning Super Bowl XLVIII.

Kearse spent two seasons with the New York Jets before he signed with Detroit in June on a one-year contract worth up to $2.5 million, per NFL.com. By joining the Lions, he reunited with former Seahawks offensive coordinator Darrell Bevell, who holds the same title in Detroit.

At the time of Kearse's signing, according to ESPN, Lions head coach Matt Patricia outlined how he could help the offense this season:

"As a player, he can certainly make some pretty ridiculous catches down on the goal line in some pretty big games at the last second, which can give defensive coordinators a lot of problems. I would say beyond that, just a guy that's very experienced here. ... He's tough. He's smart. He's a hard worker. He's one of those guys who has fought through his entire career to make him who he is. Just another good player to get in here to evaluate and see how he can help us."

Kearse's most productive NFL season came as a Jet in 2017 when he caught 65 passes for 810 yards and five touchdowns across 16 games. However, he followed it with his worst output since 2013 with 37 catches for 371 yards and one touchdown across 14 contests.

In Detroit, Kearse figured to provide veteran depth behind Danny Amendola and Kenny Golladay. Instead, a bad run that began in 2018 may have gotten much worse before the 2019 season began.