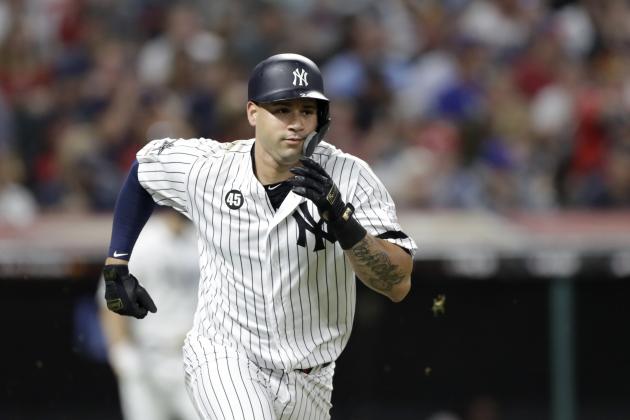 New York Yankees catcher Gary Sanchez will undergo testing after leaving Game 2 of Thursday's doubleheader against the Detroit Tigers due to a groin injury, according to Erik Boland of Newsday.

Sanchez attempted to steal a base in the top of the third inning but exited the game with left groin tightness in the fourth inning.

The catcher's prodigious power is unmatched among anyone at his position in the majors, with 400-foot plus home runs fairly routine for the veteran. He's smacked 105 home runs in 370 career games played.

Unfortunately, injuries have curtailed his career, and that trend has continued into this season. The backstop suffered a strained right calf in April that forced him to miss two weeks and a groin injury in July that kept him off the field for nearly three more.

Groin injuries held him out for a large chunk of 2018, as Sanchez played in just 89 games. A right brachialis muscle strain in 2017 forced him to miss 21 straight contests.

Sanchez has also struggled at the dish at times, and his .697 OPS in 2018 was a far drop-off from his .876 mark the year before. His defense at times is also suspect, and Stat Corner credits him with a runs-above-average mark of 0.4 this season.

But his home run-hitting prowess will be missed.

Without him in the lineup, the Yanks will turn to Austin Romine, who has seven home runs and 33 RBI in 64 games. Kyle Higashioka will back him up.