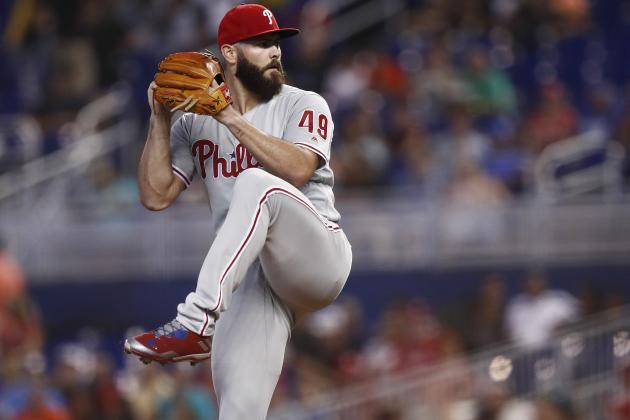 Philadelphia Phillies pitcher Jake Arrieta may be willing to consider surgery to repair the bone spur in his right elbow.

"I don't necessarily want to make a decision right now," Arrieta said Sunday after giving up five runs and seven hits to the San Francisco Giants, per Scott Lauber of the Philadelphia Inquirer. "We'll have the off-day [Monday] and maybe have a conversation on Tuesday."

"It hurts every day," Arrieta added of the bone spur. "I just wasn't able to get through my share of the outing and preserve the lead."

The bone spur was first reported on Sunday, July 7, when Phillies manager Gabe Kapler said the team was monitoring the injury and determining whether surgery would be necessary. According to ESPN's Buster Olney, the Phillies had reportedly "been operating under the assumption that Arrieta could wait for surgery until after the season."

His loss for any period of time is a major blow to a Phillies team that has struggled immensely in the pitching department. While Aaron Nola has continued his ascension into ace status after a rocky start to the season, players like Arrieta, Zach Eflin, Nick Pivetta, Vince Velasquez and Jared Eickhoff have all been poor behind him.

Add in a bullpen that has been shaky as well, and the Phillies pitching staff is a real issue. That's especially disappointing given the team's lineup—led by Bryce Harper, Rhys Hoskins, Jean Segura, J.T. Realmuto, Jay Bruce, Cesar Hernandez and Scott Kingery—continues to produce.

If the Phillies are going to secure a postseason berth, they'll need someone else in the rotation to step up next to Nola. Arrieta's injury all but makes that a necessity.