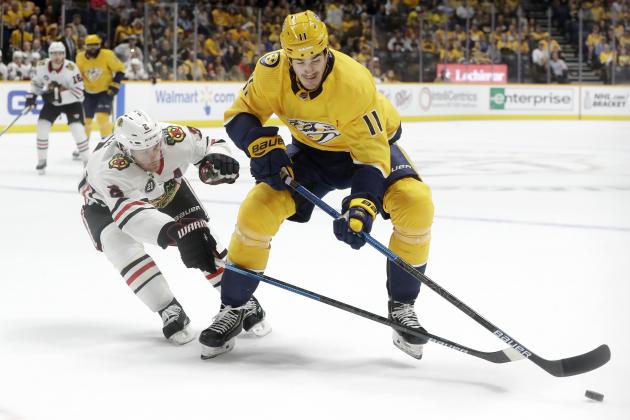 Mark Humphrey/Associated Press
Brian Boyle has heard from at least five teams prior to the start of free agency.
1
Read
0
Comments

Brian Boyle is the kind of player who can fulfill multiple roles in the NHL. Playing with the New Jersey Devils and Nashville Predators last year, Boyle scored 18 goals and six assists while playing as a third- or a fourth-line center and also playing a key role as a penalty-killer

Boyle has been through quite a bit in his NHL career. He was diagnosed with chronic myelogenous leukemia in 2017, but he still played in the 2017-18 season with the Devils, scoring 13 goals and 10 assists.

There is little doubt about Boyle's toughness or ability to help his team, and he can assist an outfit that needs a blue-collar player to get over the top.

Free agency is set to begin Monday, and Boyle has heard from at least five teams, according to Pierre LeBrun of TSN and The Athletic. LeBrun noted that the Edmonton Oilers are one of those interested in him.

Boyle, 34, has played with the Los Angeles Kings, New York Rangers, Tampa Bay Lightning, Toronto Maple Leafs, Devils and Predators during his 12-year career. He has posted 124 goals and 92 assists while filling a defensive role throughout the majority of his career.

The Boston Bruins benefited greatly from the play of their fourth line as they advanced all the way to the seventh game of the Stanley Cup Final before they lost to the St. Louis Blues.

Hard-hitting Noel Acciari played a key role on that line, primarily playing right wing while Sean Kuraly manned the center position. The Bruins would like to have him back, but they have not been able to get him to sign a new contract, and it seems clear he is going to be a free agent Monday.

Joe Haggerty of NBC Sports reported that the Bruins have made multiple offers to Acciari. "Noel has put himself in a good position, and he's going to hear what's out there around the league," said Bruins general manager Don Sweeney, per Haggerty.

Acciari scored six goals and eight assists for the Bruins in 72 games last season after putting up 10 goals and one assist the year before. He also played parts of the 2015-16 and 2016-17 seasons with the Bruins. He excels on defense and playing a physical game.

Flames and Talbot Could Be a Match

The Calgary Flames had the best record in the Western Conference during the regular season, but they were eliminated in the first round of the playoffs by Colorado Avalanche in five games.

One of the more questionable areas in that series was Calgary's goaltending, and the Flames are looking at a number of options.

The best one at this point appears to be Cam Talbot, per LeBrun. The goaltender is also talking to other teams, but if Talbot went to the Flames, it would appear to be a good match.