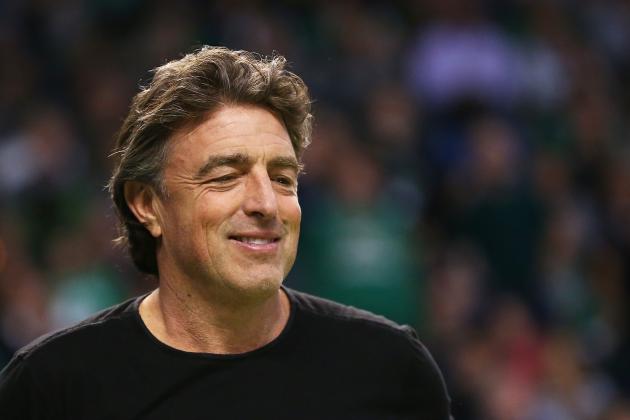 The Boston Celtics, who were listed second on the NBA Finals odds ledger before the 2018-19 NBA season began, finished a disappointing 49-33 en route to a second-round playoff defeat.

The ending leaves Boston with many more questions than answers as it looks to take the next step—a fact that isn't lost on team co-owner Wyc Grousbeck.

"This is the most uncertain offseason since 2007," Grousbeck told Mark Murphy of the Boston Herald during lunch in the Celtics' Causeway Street board room.

The 2007 offseason followed a 24-58 year in which the Celtics finished dead last in the Eastern Conference. Boston was in crisis mode but soon engineered an incredible turnaround thanks to the formation of a new Big Three comprised of Paul Pierce, Ray Allen and Kevin Garnett. That trio carried the C's to a 66-16 record and a 2008 NBA Finals victory.

As for the present day, the Celtics have much work to do before the 2019-20 campaign.

Shams Charania of The Athletic and Stadium reported that All-Star point guard Kyrie Irving will opt out of his contract and become an unrestricted free agent. Starting center Al Horford has the option to do the same if he so chooses. Both could be elsewhere next year.

Davis' agent, Rich Paul, told S.L. Price of Sports Illustrated that his client would not sign in Boston long-term once his deal runs out after 2019-20. However, ESPN's Adrian Wojnarowski reported the C's are pursuing the six-time All-Star anyway.

The possibility of adding Davis only adds to the uncertainty. Can the Celtics land the big man? If so, who's headed to New Orleans? Could Boston somehow convince Davis to stay?

The number of questions the Celtics face isn't exactly reassuring, but they won a title the last time the franchise entered an offseason filled with this much uncertainty. The C's can only hope for history to repeat itself next year.