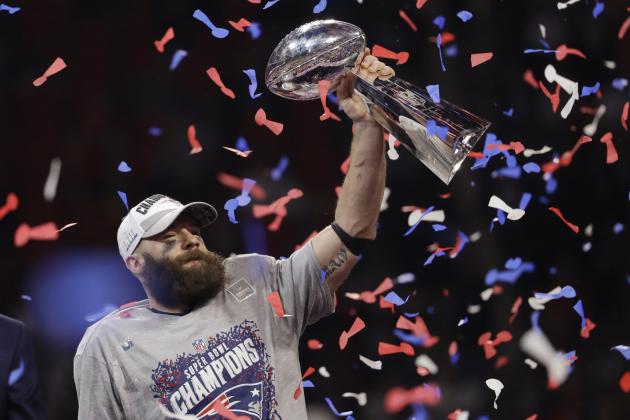 After winning their sixth Lombardi Trophy in February, the New England Patriots have commemorated their record-tying Super Bowl championship with extravagant rings.

As the team called them, they are the "greatest rings of all time":

The greatest ring of all-time. pic.twitter.com/Vv5AHmVGhS

The face of the ring features all six of the franchise's Lombardi Trophies, which ties it with the Pittsburgh Steelers for the most of all time. The side of the ring includes the final score (13-3) of their Super Bowl LIII victory over the Los Angeles Rams as well as the Patriots' "still here" slogan.

The bottom of the ring pays tribute to the team's previous Super Bowl championships.

According to the Patriots, 422 diamonds are included on each ring:

All about the details. pic.twitter.com/sIAtMCId4M

As one might expect, the team members were more than eager to get their hands on this bling:

The #Patriots getting their party on. Rings to be delivered shortly. pic.twitter.com/uTumsCA5vy

The #PATRIOTS got their rings. Here's @dharm32 with the before and after... pic.twitter.com/6nYDNofmtc

And for you conspiracy theorists...Sony Michel (and Bentley) getting their rings. #PATRIOTS pic.twitter.com/7TQ3YU5RWm

Here's how New England's latest ring stacks up with the rest:

Welcome to the family. pic.twitter.com/Aid7eFhdLi

Now, the Patriots will have some time to enjoy their newest piece of jewelry before they turn their focus to trying to add a seventh ring to the collection.