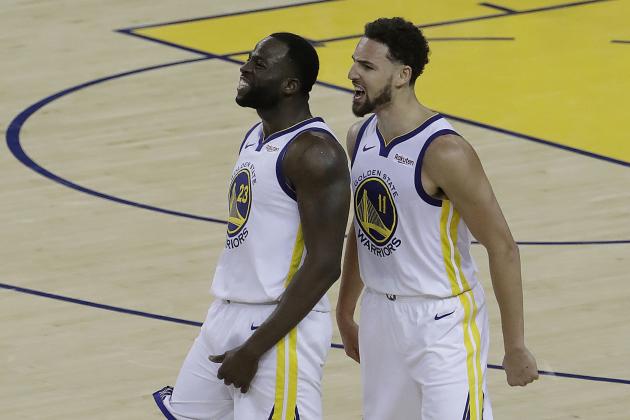 "He should’ve been first," Green said referring to Thompson, per Anthony Slater of The Athletic.

Although it initially seemed as though he was complaining about his own placement, the forward clarified that he was supporting Thompson:

Pretty sure I said Klay should’ve been first.... https://t.co/FSiHoR0yQK

Marcus Smart and Eric Bledsoe were the two guards ahead of Thompson on the first-team All-Defense, per Tom Westerholm of MassLive.

Thompson has been known as a tough on-ball defender for much of his career, but he was never named to either All-Defense team, so at least a spot on the second team is an upgrade.

Green praised Thompson earlier in the year for his work on that end, coming after he held Russell Westbrook to 2-of-16 shooting in a March game.

"There's not many guards that is better than Klay defensively," Green said, per Mark Medina of the Mercury News.

"Yeah, but the people that vote on that don't really know the game," Durant said, per Connor Letourneau of the San Francisco Chronicle.

There is still room for improvement, but Thompson was at least able to earn some recognition after excelling on that end of the court for years.