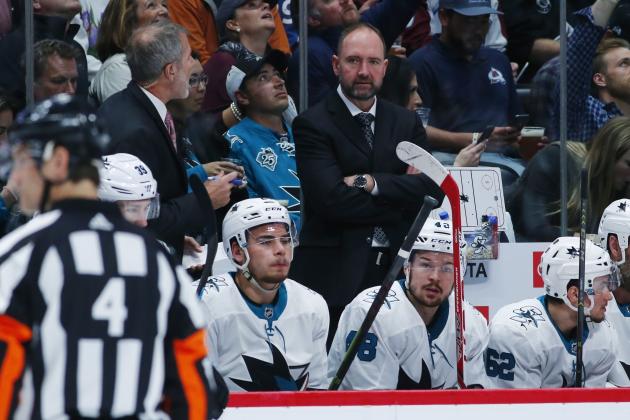 The San Jose Sharks have had some bounces go their way during their postseason run, but they're pushing back on the notion that they've been "lucky."

"It irks me when you use words like that because this team has played four or five elimination games. Not moments—games. Twelve to 15 periods of elimination hockey against Vegas, against Colorado in Game 7, so I think it's a ridiculous statement.

"You know what? We've found a way. And we've faced a lot of adversity. We've had calls go against us and we've had calls go for us, and we're still standing. For anybody to minimize that, I think is disrespectful to our group and what we've done."

The Sharks hold a 2-1 lead in their Western Conference Final series against the St. Louis Blues after surviving a pair of seven-game thrillers against the Vegas Golden Knights and Colorado Avalanche. In Game 7 of the Golden Knights series, officials called a controversial five-minute major penalty against Vegas' Cody Eakin in the third period, and the Sharks scored four goals during the power play to rally from a 3-0 deficit. The NHL later deemed the major penalty was incorrect.

Sharks forward Evander Kane dismissed the idea that his team has been lucky:

"I don't know if there's ever been a lucky team who's won. I think at the end of the day, it boils down to finding ways to win, and every team goes through adversity throughout the course of the playoffs. We've battled throughout these playoffs. There's been a lot of different types of scenarios that haven't gone our way that we've been able to push through and find a way to be successful."

It's unquestionable that the Sharks have gotten some breaks. Every team that wins a Stanley Cup does. San Jose's breaks have just been more blatant than others.

What some call "luck," others may call destiny. The Blues have home ice for Friday night's Game 4. Odds are the luck will return to the mean, but it may not happen before the Sharks hoist the Cup.

Follow San Jose Sharks from B/R on Facebook and get the latest updates straight to your newsfeed!

We'd like to send you the most entertaining San Jose Sharks articles, videos, and podcasts from around the web.