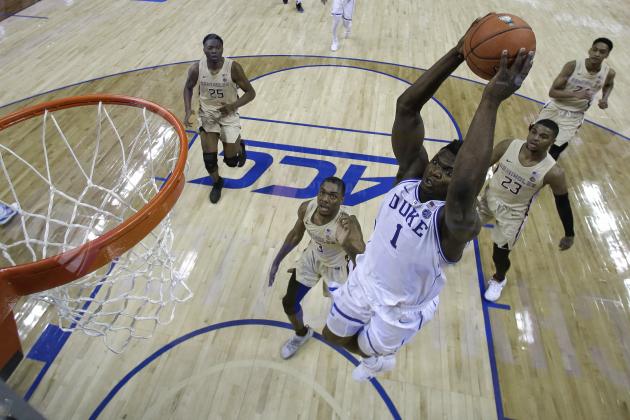 Zion Williamson led all scorers with 21 points and RJ Barrett added 17 points, nine rebounds and four steals as No. 5 Duke beat No. 12 Florida State 73-63 in the ACC men's basketball championship game on Saturday at the Spectrum Center in Charlotte, North Carolina.

Williamson averaged 27.0 points on 77 percent shooting and 10.0 rebounds in tournament play, a performance that placed the 6'7", 285-pound forward in elite company per ESPN Stats & Info:

Zion Williamson averaged 27 PPG and 10 RPG during the ACC Tournament.

Zion and Kevin Durant are the only freshman to average at least 25-10 in a conference tourney over the last 20 seasons (min. 3 games) pic.twitter.com/pGnwZaJBkQ

Duke has lost just one time with its four star freshmen on the court. With all of them back in the mix, the Blue Devils are the nation's clear No. 1 team entering March Madness.

Despite Williamson missing in essence six full games earlier this year, Duke entered Saturday ranked third in the Ken Pomeroy College Basketball Ratings and No. 1 in the Sagarin Ratings.

Had Williamson played in all six of those games (when Duke went 3-3), we would be talking about the Blue Devils being the top-ranked team everywhere, no questions asked.

Even with the losses sans Williamson, Jeff Borzello of ESPN and Gary Parrish of CBS Sports thinks highly of Duke's overall body of work:

FINAL: Duke 73, Florida State 63. The Blue Devils will enter Selection Sunday having lost just once while at full-strength. They should be the No. 1 overall seed in the 2019 NCAA Tournament.

Of course, Williamson's presence on Duke's roster is the biggest reason it's the best team entering tournament play. He dominated all three postseason games despite sitting out with a knee sprain for nearly a month. Somehow, he made 33-of-43 shots from the field as well.

Williamson has the highest player efficiency rating of any Division I men's college hoops player since at least 2010, per Sports Reference. The lists don't go further beyond this decade, so it's conceivable Williamson is the most dominant and efficient player measured on this level for far longer than that stretch. Furthermore, he's nearly six full points ahead of his nearest PER competitor (John Brown of High Point in 2015-16) this decade.

Simply put, there's no other player who's ever been close to what he resembles, to the point where ESPN color commentator Jay Bilas remarked that it's impossible to come up with any superlatives to describe him anymore.

A one-on-one comparison between him and any NBA player past or present is fruitless. Tommy Beer of NBC Sports/Rotoworld gave it a shot with a few players and at least a few mythical creatures, however:

Zion Williamson comp:
some combination of a young Larry Johnson, a minotaur, Shawn Kemp, Charles Barkley, a centaur, Blake Griffin and a unicorn.

As far as Duke's body of work goes, it's one defeat at full strength was a neutral-court 89-87 loss to Gonzaga in November. The freshmen Blue Devils were still very early in their collegiate careers, with that being the sixth game of the season.

In retrospect, the fact that the young Duke team was able to lose by just two is impressive considering three of the Zags' top four scorers are upperclassmen and have far more experience. The Bulldogs are also going to be a No. 1 seed in the NCAA tournament when the brackets are announced, so that defeat is nothing to be ashamed of.

Otherwise, Duke opened its season with an emphatic 34-point win over Kentucky, which looks like a No. 2 seed in the tournament. The Blue Devils beat future No. 1 seed Virginia twice and likely No. 1 seed North Carolina the one time they saw them at full strength. Two victories are now on the resume against No. 12 Florida State as well.

Ultimately, the Blue Devils aren't infallible, but the combination of Williamson and the team's overall body of work proves why they're the clear favorite entering the NCAA tournament.

Florida State isn't the sexiest team in the field, and it's doubtful you'll see many people picking the Seminoles to go very far in their brackets.

However, the Seminoles have the feel of a bracket-busting team that can go to the Final Four.

It's not just five guys playing the vast majority of the game and four others offering some spot minutes for rest either. The Seminoles will play nine players for at least 10 minutes per game routinely, which helps the stout starting five get some needed rest down the stretch. Of note, only senior guard Terance Mann averages more than 30 minutes per game.

Eight players averaged six or more points per game, with no one posting over 13. In fact, leading scorer Kabengele is a reserve.

Second, the Seminoles have plenty of experience. Five of FSU's top eight players are seniors, and none are freshmen. In other words, everyone in the rotation was on the roster that made an Elite Eight run and lost to eventual national championship runner-up Michigan last year.

Third, FSU has built an impressive resume that includes victories (or competitive games) against the nation's best teams.

The Seminoles beat LSU and Purdue, who are projected to fall in the No. 3 and No. 4 seed range, respectively by Bracket Matrix.

FSU also took down No. 16 Virginia Tech twice and No. 2 Virginia in the ACC tournament semifinal. The 'Noles hung tough with Duke twice and would have beaten the Blue Devils during the regular season if not for a game-winning three-pointer from Cam Reddish to give his team a nail-biting 80-78 win.

Ira Schoffel of Warchant.com also pointed out how well FSU has played over the past two months:

FSU has lost once in the last 54 days ... and that was on the road at UNC. That's a remarkable run no matter what happens tomorrow.

The Seminoles have gone 14-2 in their last 16 games, with their only losses on the road versus a No. 1 seed and a neutral loss against the potential No. 1 overall seed playing at full strength. That's not bad.

Andy Katz of NCAA.com was also impressed from an eye-test perspective:

First time finally seeing @FSUHoops in person and the length, activity and athleticism is no joke. Clearly last March was no fluke with this particular crew at FSU.

In sum, the combination of size, depth, experience and success against the nation's best make Florida State the ultimate dark-horse candidate.

Both teams will wait to hear their names on Sunday during the NCAA tournament selection show, which begins at 6 p.m. ET on CBS.

We'd like to send you the most entertaining ACC Basketball articles, videos, and podcasts from around the web.