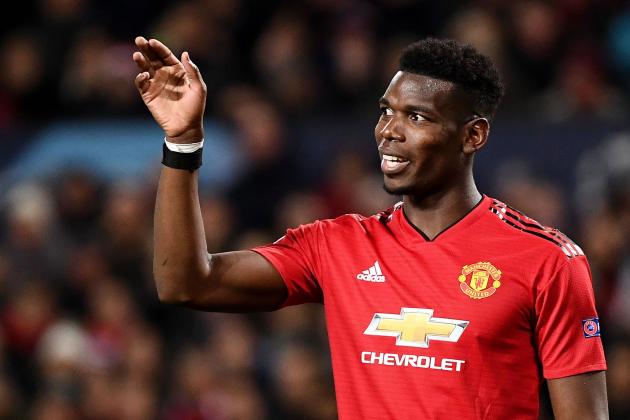 Paris Saint-Germain star Julian Draxler has said he and his team-mates are "very happy" that Manchester United midfielder Paul Pogba will be suspended for the second leg of their UEFA Champions League showdown.

PSG won the first leg of the last-16 tie 2-0 at Old Trafford, with second-half goals from Presnel Kimpembe and Kylian Mbappe enough to put the Ligue 1 outfit in a strong position before the return fixture in Paris.

To make matters even tougher for United, they will be without Pogba for that match after he was given a red card late on following a rash tackle on Dani Alves. Given how important the Frenchman is to the Red Devils, Draxler was happy to concede that PSG are glad he will not feature at the Parc des Princes, per Sacha Pisani of Goal:

"For me Paul is the best player of Manchester United. He's a very important player for the team, and you could see he is fantastic [on Tuesday]. That is why we are very happy he will not play the second leg.

"I think they started very well so the pressure was not easy for us, but in the second half we were more confident and the pressure of Man United was a little bit less. That helped us to improve our game so we found some space on the pitch and we used that very well and that is why we deserved to win."

As a France international, there was plenty of excitement to see what Pogba would do when he came up against the Paris outfit on Tuesday, especially given the remarkable form he has been in since Ole Gunnar Solskjaer was appointed as caretaker manager in December.

Prior to the Champions League encounter, Sky Sports Statto showed how productive Pogba has been as of late:

Even so, Tuesday's match saw the United man come up against a higher class of opponent, with PSG pairing Marco Verratti and Marquinhos in central midfield.

While the former is only just returning from injury and the latter is a centre-back who was pushed further forward, in the second period, they were able to dominate the game. United's trio of Pogba, Ander Herrera and Nemanja Matic were pinned back as a result.

Former Liverpool stars Jamie Carragher and Luis Garcia praised the performances of the PSG pair, noting how they were able to snuff out Pogba:

Overturning a 2-0 deficit would be an enormous challenge for a full-strength United team in France. However, with Pogba missing and doubts over the fitness of Anthony Martial and Jesse Lingard, who both came off injured on Tuesday, the task may well be impossible for the Red Devils.

Despite the dismissal against PSG, Pogba has enjoyed the best spell of form of his United career in recent weeks. The team's fans will be hoping this setback doesn't hamper the tremendous progress the midfielder has made under the new manager.