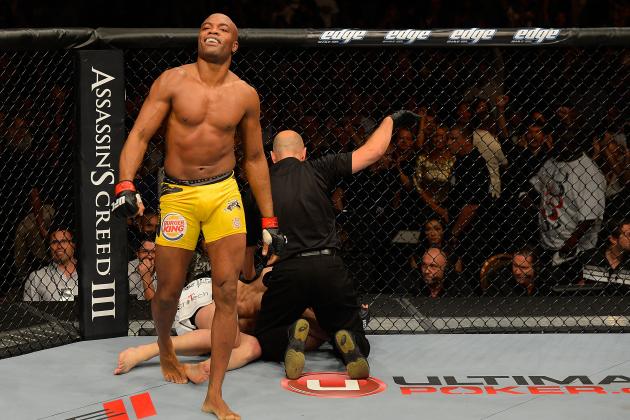 In his day, Anderson Silva (34-8, 1 NC) was an epoch-defining fighter in a sport on the rise. It's not just that he dominated the competition—even fellow champions like Rich Franklin, Vitor Belfort and Forrest Griffin—it's that he dominated them with an unheard of flair and style all his own.

Mixed martial arts is a heavy metal sport. Silva played jazz instead, deftly picking up his opponent's rhythms and countering with his own riffs; devastating, heart-shattering, beautiful violence delivered with a bullfighter's grace.

Silva brought something unique to a sport most often described as a brutal grind, injecting an almost playful joy into what is in many cases an awfully grim proceeding. His thin, reedy appendages and winsome smile seemed at odds with an otherworldly capacity to wreak havoc.

His UFC legend was born on a Saturday in 2006 at the Mandalay Bay, when a knee from the clinch rearranged Franklin's nose. He would leave Las Vegas the next day with the world middleweight championship, a title he held for nearly seven years, a phenomenal feat in a sport wherein title reigns are often measured in days rather than years.

MMA is a sport of moments. Nobody had more than the iconic Silva. Whether he was snapping a testosterone-fueled Belfort's head back with a kick to the face, pulling victory from defeat in a final-round win over Chael Sonnen, or staring at a place on the Octagon fence where poor Stephan Bonnar's hapless kick had landed—a place Silva himself had stood a split second before magically disapparating—Silva's excellence often bordered on disrespect.

Against Griffin, he dropped his hands and then dropped his opponent with a flicking jab, the former light heavyweight champion collapsing dramatically to the ground and throwing his hand up to concede defeat, hopelessly outmatched despite his own championship pedigree.

The replay makes Silva look like a character from The Matrix, subtly shifting his weight and moving his head just enough to make Griffin miss and not a millimeter more. "I love Forrest Griffin," commentator Joe Rogan said when announcing the 2009 fight, "but that was one of the most embarrassing knockouts we've ever seen."

As the highlight reel grew, there was a corresponding shift in attitude. The line between a smile and a sneer grew less and less distinct as Silva found no one who could truly challenge him.

In the end, that cost him.

The legend of Anderson Silva died in the same city it was born, across the street at the MGM Grand in 2013 when age, hubris and a Chris Weidman left hand finally humbled a fighter who seemingly believed he was a god. As he did against Griffin and so many others, Silva dropped his hands and taunted Weidman, confident in his ability to make the man across from him look foolish for even attempting to win.

But this version of Silva was 38, just slow enough that a punch that previously might have missed by mere centimeters instead landed squarely on the chin. Almost six years later, Silva is now the owner of a Wikipedia page coated in red rather than green, the whiff of defeat perhaps becoming a bit too commonplace for a fighter who once won 17 in a row, all but two by knockout or submission.

In his most recent fight, before yet another run-in with performance-enhancing drugs, Silva struggled to a workmanlike win over Derek Brunson, a fringe top-10 fighter a prime Silva would have beaten while holding back a long, exaggerated yawn with one hand. A win is a win—but many, even those closest to him, wondered just what it was he had left to prove, either to himself or the world at large. 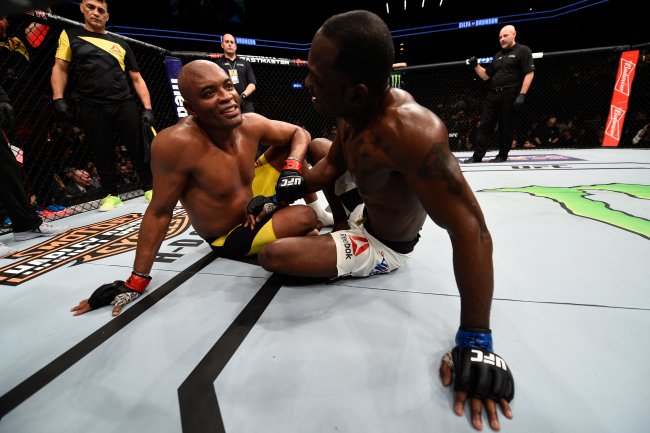 "My family talked to me," Silva told UFC.com's Thomas Gerbasi. "'Dad, you need to stop.' My friends too. And I talked to my dad and he said, 'OK, why do you continue to do this? You're crazy; stop, you're old.' And I said, 'No Dad, you're old.' I love my job, and that's most important. When you have something special inside your heart that you love, keep doing it. Sometimes it's not easy, but I try to do my best every day."

Before Silva, there was no analogue, no easy fighter to compare him to without delving into the cinematic majesty of Bruce Lee and other faded celluloid legends. In his wake, however, others have followed, stylish strikers created from his mold.

One such fighter comes from Nigeria, among the first from his native land to make a mark in this new sport. As if to make light of stereotypes and easy cliches, he moves like a jungle cat, all sinew and long limbs, appendages that dart as if from nowhere with shocking speed and power. He's been compared to anime characters and martial arts movie actors—but mostly Israel Adesanya, the UFC's top prospect at 185 pounds, is compared to Anderson Silva.

Silva has long joked about fighting his clone. Adesanya, to many observers, meets that description, at least well enough to be pulled into a police lineup.

"I know this man better than he knows himself. I know some things about him that he doesn't even know about himself because I'm on the outside looking in."

This weekend, the two will collide, the future meeting the past in a bout clearly meant to pass the baton to the next generation. As such matchups go, it's a little on the nose. Sure, it's common for the young to send the old to an early grave in combat sports. But it's rarely quite such a tit-for-tat trade.

It's not just Adesanya himself who is exceedingly confident in having his hand raised Sunday. Oddsmakers, pundits and even fellow fighters have all dismissed Silva's chances. UFC President Dana White is already talking about his retirement.

But just how softly does Anderson Silva intend to go into that dark night?

"I think Israel is a great fighter," Silva said during a media workout. "But he's not my clone. He's not a better version of me...I continue in this sport, thank you God, and the new talent comes. It's natural that I fight young fighters...it's not easy. I try to do my best every day. Let's go see what happens in Australia."

Adesanya counts Silva among his heroes—but he doesn't see himself as part of a redemption narrative.

"They said they would give him a title shot if he wins. I think they're honeyd--king him, man," Adesanya told Bleacher Report's Scott Harris. "...They're honeyd--king him. But hey, if he beats me, he deserves a shot. If he wins, good game to him. But I'm the future, and the future is now. Maybe in another universe. Maybe. But it's not in this timeline."

Silva, veteran of 43 professional prizefights, appears confident stepping into the cage. But so did Franklin, Griffin and Bonnar before facing him. Perhaps, for the first time, the legend will understand what it's like to see a young Anderson Silva staring back across the cage, cool, cruel and calculating eyes sizing him up as little more than prey.

Will it feel like looking in a mirror? Only Silva can say—and he'll find out for sure Sunday.

We'd like to send you the most entertaining UFC articles, videos, and podcasts from around the web.