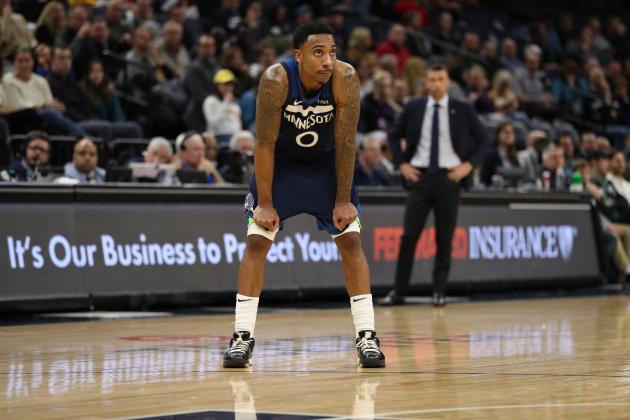 ESPN's Adrian Wojnarowski was the first to report the deal.

Teague, who spent the first seven seasons of his career in Atlanta, is averaging 13.2 points, 6.1 assists and 2.6 rebounds in 34 games this season, including 13 starts.

The 31-year-old appeared in 42 games during the 2018-19 season, averaging 12.1 points and 8.2 assists. He shot 42.3 percent from the field and 33.3 percent from beyond the arc. He battled injuries throughout the year and finally underwent ankle surgery last April.

Shortly after the Timberwolves confirmed his surgery, Shams Charania of The Athletic and Stadium reported Teague opted in for the final year of his contract, which pays him $19 million.

The Timberwolves moved him to the bench in November, with rookie Jarrett Culver assuming the starting point guard duties.

At the time, signing Teague to a three-year, $57 million deal in 2017 made sense for the Timberwolves—even though it looked like a bit of an overpay. Minnesota needed a point guard after trading away Ricky Rubio, and Teague was one of the best options the team could realistically target on the free-agent market.

The Timberwolves also had to spend big during the 2017 offseason because the looming extensions for Andrew Wiggins and Karl-Anthony Towns limited their financial flexibility beyond that. Wiggins' four-year, $147.7 million deal went into effect last year, while Towns' five-year, $158 million supermax extension went into effect this season.

Teague's on-court returns have generally been pretty underwhelming, though.

Teague went backward a bit in 2018-19 as well, although some of that could have been due to the general dysfunction in Minnesota created by the Jimmy Butler trade saga and Tom Thibodeau's midseason ouster.

According to NBA.com, the Timberwolves had a minus-0.1 net rating with Teague on the court. His three-point percentage was the third-lowest of his career, and he slipped to 35th in real plus-minus among point guards (minus-0.74).

The team, which is in 12th place in the Western Conference with a 15-25 record, is almost certainly going to miss the playoffs, so it didn't have much use for a veteran point guard on an expiring deal.

On the surface, Teague would seem to be a better fit for a contender, but going back to where his NBA career began in Atlanta could be a good decision for all parties involved as well.

As a member of the Hawks, Teague can either serve as a backup and mentor to star guard Trae Young or he can potentially play alongside him at times and serve as more of a true point guard with Young doing most of the scoring. While Young is averaging 29.1 points per game, the second-leading backcourt scorer for Atlanta, which has the second-worst record in the NBA at 9-32, is Kevin Huerter at 11.6.

Like Teague, Crabbe is on an expiring contract. In 28 games this season, Crabbe is averaging 5.1 points and 2.3 rebounds, which is his worst production since 2014-15. He likely won't be much of a factor in Minnesota.

In addition to Teague, the Hawks landed Graham, who is a decent role player. He is averaging 5.2 points and 3.0 rebounds this season in 33 games, including 20 starts. Graham is also on an expiring deal.