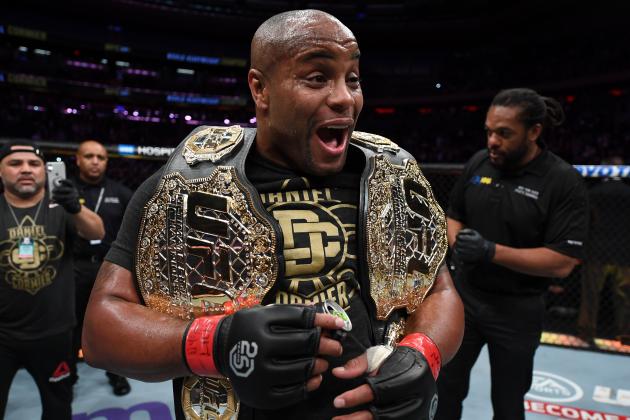 If we've learned anything over the years as mixed martial arts fans (and we certainly haven't learned much), it's this: Be careful what you wish for.

Last year in this very space, we were lamenting the absence of the original "champ, champ," Conor McGregor. Sure, he wowed the world with his ultimately unsuccessful foray into boxing. His presence in the Octagon, however, was sorely missed.

This year? The UFC and its fans may have gotten more McGregor than they bargained for.

Between his assault on a bus full of fellow fighters, his ill-fated attempt to make his bout with Khabib Nurmagomedov personal (hey, he succeeded) and his subsequent failure to make good on his trash talk, McGregor seemed to use up all of the goodwill he had remaining with fans.

That is, until the next time he fights, when we'll all gobble up the drama all over again. Such is the nature of obsession.

But MMA is bigger than any one man, even when that man sets new box office records every time he fights. There were moments that captivated us all. Bodies hit the floor, and limbs were twisted to their breaking point. We soaked it all in and couldn't wait for more to come.

Inside the cage, a legacy was secured when Daniel Cormier knocked heavyweight champion Stipe Miocic on his keister to win a second title belt, and a legend was born when bantamweight Amanda Nunes did the same to the seemingly unbeatable featherweight queen, Cris Cyborg.

Nurmagomedov made his case as the sport's top fighter by controlling McGregor only to be usurped by Max Holloway less than two months later, perhaps presaging an eventual showdown between the featherweight and lightweight kingpins. There's an embarrassment of riches in both weight classes, making 2019 a promising year no matter what mad alchemy matchmakers come up with to entertain the masses.

Whatever happens, we'll be following our favorite promotions to new stomping grounds in 2019. For UFC, the Fox era ends and coverage begins on ESPN. Bellator has joined the DAZN streaming service, and ONE Championship will be featured prominently on Turner Sports platforms (including Bleacher Report Live).

What follows are the best fighters, bouts and finishes of the year as well as the stories that moved us the most in 2018. Here's hoping 2019 has even better things in store.

Combat sports has always been home to the absurd, but things rarely get stranger than they did back in April.

Days ahead of UFC 223, a video of a Khabib Nurmagomedov-led group scuffling with Conor McGregor training partner Artem Lobov began circulating on social media. That's not a particularly unusual scene—plenty of videos and stories have popped up over the years of fighters shoving one another or getting into shouting matches during the weight-cutting process—but this time was different. While most of those incidents are over and done with almost immediately after they happen, McGregor wasn't going to stand for that.

Nurmagomedov rolled up on McGregor's pal with a crew, and he was going to return the favor.

Following the UFC 223 media day, McGregor and a group of friends rushed the parking garage in Brooklyn's Barclays Center. When Nurmagomedov was spotted on a bus alongside several other fighters and UFC staffers, McGregor proceeded to throw a hand truck at the vehicle, shattering one of its windows and showering several fighters with broken glass. The whole scene was caught on camera and garnered mainstream attention in a way few MMA stories do.

Though Nurmagomedov would go on to compete without issue, besting Al Iaquinta in the main event, the ramifications of the attack were felt for months. Fights were cancelled, McGregor's return was pushed back, and the UFC's handling of the skirmish created a great deal of unrest among fighters, fans and media alike.

The story between McGregor and Nurmagomedov didn't end there. While Nurmagomedov was already on the short list of fighters who could welcome McGregor back to the cage, he cut to the front of the line when that hand truck went through the bus window. The legal hurdles were cleared, the fight was made, and at UFC 229, Nurmagomedov scored an emphatic win over the Irishman.

What could have been a banner moment for Nurmagomedov was tarnished when he immediately jumped out of the cage to attack McGregor's cornermen, igniting a massive brawl between the two camps. Nobody was injured, but this extended the already lengthy feud and put both men's careers in purgatory. As of this writing, they are both awaiting hearings with the Nevada State Athletic Commission.

Yair Rodriguez and the Korean Zombie, Chan Sung Jung, would have been in contention for fight of the year no matter what happened in the closing seconds of their November bout. The two had put on a fight worthy of the UFC's 25th anniversary, going back and forth for five action-packed rounds in a classic battle of attrition.

Jung, unwilling to play it safe despite being mere seconds away from victory on the judges' scorecards, charged forward for one more crowd-pleasing exchange.

Rodriguez ducked down and, without looking, threw a Hail Mary elbow into the ether. That it landed at all is a minor miracle. That it knocked Jung silly, stealing the fight for Rodriguez, makes it unforgettable.

Before Rodriguez landed his improbable elbow, Gaethje appeared to be well on his way to consecutive wins for fight of the year, this time in a losing effort against the equally scintillating Dustin Poirier.

In his short UFC tenure, the former amateur wrestling standout has established himself as an unmissable action fighter. This time, he spent the fight brutalizing Poirier's legs with hard kicks. It appeared to be paying off as the bout wore on but eventually proved his undoing.

Poirier was able to time one of his kicks perfectly with a hard left hand en route to a fourth-round stoppage victory. It was the kind of fight that built two stars, and we look forward to both fighters trying to top themselves in 2019.

Yair and the Korean Zombie waged a memorable fight, but one could make a case for a few other bouts as 2018 fight of the year. In the knockout category, there was less debate. Rodriguez's elbow for the ages wins handily.

It becomes even more mind-bending when remembering that Rodriguez threw the elbow intentionally, at least according to him. Sure, it took luck to land it flush and finish off the Zombie in one shot, but it wasn't purely a stab in the dark. To look at the strike again, to watch it land more or less at the same exact moment as the final horn, almost defies reality when thinking Rodriguez actually knew what he was doing.

Rodriguez collapsed in exhaustion shortly after, joining his opponent on the ground, almost as if they were sunbathing. But when they finally came to, they were basking in the glow of a special bout, some big bonus checks and one of the most sensational knockouts in UFC history.

Rodriguez-Zombie was the year's clear choice based on optics, but Brian Ortega vs. Frankie Edgar carried more figurative weight. A slight underdog in the bout, a tacit featherweight title eliminator, Ortega melted the former lightweight champ with a ferocious uppercut in the closing seconds of the first round. It was all over in one punch.

Ortega is best known for submission skills, but when he handed Edgar his first knockout loss, he showed he is the total package.

Aleksei Oleinik had nine Ezekiel chokes outside of the UFC. It was an extraordinary accomplishment, but given the difficulty of landing the submission, there was the thought he would never pull it off inside the Octagon. Surely with the depth of the UFC's talent, he would not be submitting opponents off his back with the Ezekiel.

In January 2017, Oleinik submitted Viktor Pesta with the Ezekiel choke, to much delight. But here's the thing…he did it again.

At UFC 224 on May 12, Oleinik took on Junior Albini. At the 105-second mark, Albini tapped out to the Ezekiel choke.

The rarity of the choke helped Oleinik's case to claim submission of the year. We saw several come-from-behind submission victories, but we've seen the moves before. When a fighter is able to wow us with simplicity and work his way into title contention with rare submissions, fans will always reward it with admiration.

Wieczorek's leg went up over Bhullar and secured the omoplata, and he was able to sit up before Bhullar recognized what was going on. Wieczorek then applied pressure to get the finish. In another year, perhaps with more on the line, Wieczorek would walk away with the honor.

For some, Daniel Cormier will live eternally in the dark shadow cast by Jon Jones. The people who believe this are being willfully ignorant about one of the best fighters and careers the sport has ever seen.

Cormier has promised he'll retire when he turns 40, which is less than four months away. As we (unfortunately) saw in 2018, MMA retirements have a way of not sticking, and there's no way of knowing for sure if Cormier truly plans on walking away and not coming back.

I've known the man for a decade now, and I believe him when he says he's done for good. He is notoriously thrifty and has saved almost every penny he's earned over his illustrious career, but saying no to a comeback offer worth millions of dollars? That's a tough task.

But if Cormier's sun is setting, he's going out with a bang. In 2018, he defended the light heavyweight championship against the helplessly overmatched Volkan Oezdemir. It was light work for Cormier. But then he went out and detonated Stipe Miocic in July to capture the heavyweight championship, making him one of the few to hold two titles simultaneously and also giving us a whole new perspective on his career. We knew he was great, but on that night, he became one of the greats. Maybe the greatest ever.

Cormier capped his year by smoking the hard-punching Derrick Lewis in a November heavyweight title defense. In between those fights, Cormier coached his kid's wrestling team at AKA, teaching nightly classes to a couple dozen children from the Bay Area. He made near-weekly appearances on Fox broadcasts for the UFC. He started coaching a high school wrestling team because he apparently didn't have enough on his plate already. He kept up a rigorous training schedule in the hopes of landing a lucrative final career fight with Brock Lesnar.

Cormier had stiff competition from Amanda Nunes and Israel Adesanya this year, but becoming the first man to capture the UFC's two heavyweight championships at one time is a remarkable feat, and it is one worth celebrating.

Nunes extended her UFC winning streak to eight in 2018, but it was her 51-second demolition of Cris "Cyborg" Justino in the year's final card that earned her runner-up status.

Cyborg was a sizable favorite and was looking to seal her legacy as the greatest women's UFC fighter ever, but that superlative is now a better fit for Nunes, who needed only a combined 99 seconds to defeat both Cyborg and Ronda Rousey (whom she dispatched in 48 seconds back in December 2016).

We'd like to send you the most entertaining MMA articles, videos, and podcasts from around the web.