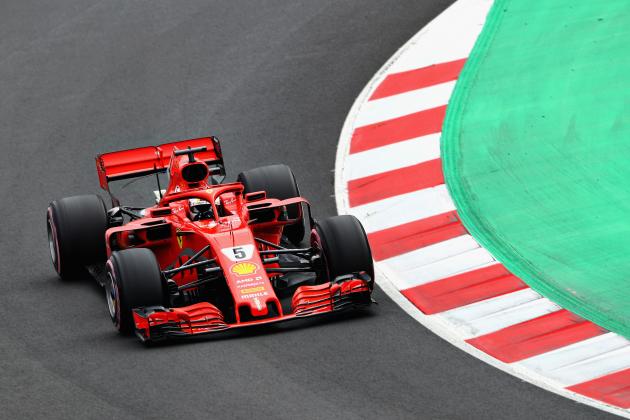 Sebastian Vettel set the fastest time of Formula One pre-season testing so far as he clocked a lap of one minute, 17.182 seconds on hypersofts in Thursday's morning session at the Circuit de Barcelona-Catalunya in Montmelo, Spain.

The Ferrari driver bettered Daniel Ricciardo's impressive performance in the Red Bull from Wednesday and then just got quicker and quicker until he had almost a second on the Australian's time.

Kevin Magnussen finished a surprise second on the timesheets in his Haas as he returned a 1:18.360 on supersofts, while Nico Hulkenberg was third in the Renault.

It was a much better morning for McLaren as Stoffel Vandoorne finished fifth fastest with a 1:18.855 and, crucially, having completed 48 laps.

Here's a look at the times from the morning's action:

On the penultimate day of testing, McLaren really needed an easier time of things having been plagued by stoppages so far in Barcelona.

There was cause for optimism when Vandoorne went out early and put together a string of quick laps while also getting a decent amount of time on track, to the delight of his team-mate, Fernando Alonso:

Vettel (hyper) is well over a second clear of Magnussen (super) in P2#F1 #F1Testing pic.twitter.com/iGMEJaL6Ij

Vandoorne then returned to the garage for almost two hours but got back on track just before the lunch break to complete one of McLaren's more positive sessions in pre-season testing.

The Belgian set the early pace at the top of the timesheets, but he was subsequently bettered by Hulkenberg's Renault before both were left in the dust by Vettel.

Per Formula 1, the German dipped into the 1:17s and broke the lap record when he switched on to hypersofts, and he improved again to set a daunting benchmark for the rest of the field:

Magnussen then clocked his 1:18.360 on harder tyres, likely while running a qualifying simulation.

Mercedes were conspicuous by their absence from the top of the standings, with Valtteri Bottas finishing seventh after a fastest lap of 1:19.532.

The Finnish driver was likely satisfied, though, as he managed to get through 97 laps, more than any other driver in the morning session.

The early action on Thursday finished in dramatic fashion as Pierre Gasly looked to have taken P2 after a 1:17.805 in the Toro Rosso, but it was chalked off for breaching track limits.

We'd like to send you the most entertaining Formula 1 articles, videos, and podcasts from around the web.