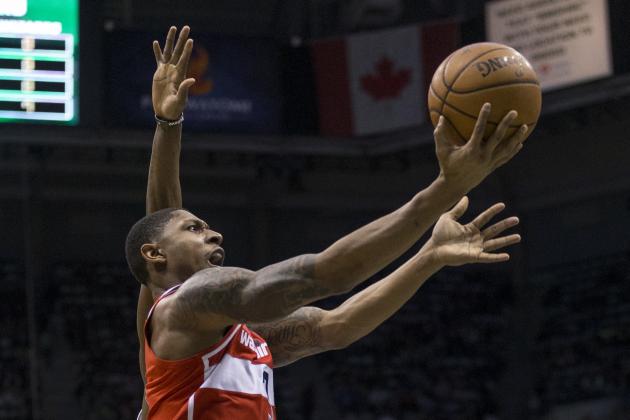 The Washington Wizards will likely need All-Star John Wall to challenge the best teams in the Eastern Conference come playoff time, but they are hitting on all cylinders without him entering the season's stretch run.

Washington improved to 10-3 since Jan. 25—the last time Wall played before being ruled out with a knee injury—with a 107-104 victory over the Milwaukee Bucks on Tuesday at the BMO Harris Bradley Center.

Bradley Beal led the way in the critical win with 21 points, eight assists and seven rebounds, helping counter a stat-stuffing performance from Giannis Antetokounmpo (23 points, 13 rebounds, eight assists, six blocks and three steals). Antetokounmpo had the opportunity to tie the game with less than five seconds remaining and complete Milwaukee's comeback from 21 down but rimmed out his turnaround jumper in the lane.

The victory took on additional meaning since the Wizards were the No. 4 seed in the East and the Bucks were the No. 6 seed entering Tuesday's NBA slate. A mere 1.5 games separated them at tip, so Washington created some breathing room with the head-to-head win on the road.

Washington didn't make it easy on itself down the stretch after watching a 21-point lead disappear to one multiple times in the fourth quarter, but Beal drilled a three-pointer with 59 seconds remaining to push the advantage back to five. Those ended up being the decisive points.

His ability to come through with Wall sidelined as the go-to option in crunch time took on even more weight because Otto Porter Jr., who was the team's second-leading scorer Tuesday with 17 points and seven rebounds, was grimacing in the final minutes after being hit attacking the basket.

Beal has found himself in a ball-handling and creating role far more with Wall out, and he has responded by creating his own shot off the bounce and facilitating when opposing defenders collapse on him. This marked his eighth straight game with at least five assists, and he still got his points in the critical moments with the game hanging in the balance.

He helped set the tone in a team effort, as eight different Wizards scored at least eight points. Porter and Kelly Oubre Jr. (13 points) took advantage of some of the openings created by additional attention directed at Beal, and Markieff Morris carried the frontcourt offense with 14 points.

Washington wasted little time demonstrating its team effort by scoring the first 14 points of the game with five different scorers on five assists. It poured in 40 points in the first quarter alone on its way to an 18-point advantage through the first 12 minutes.

For as unstoppable as the offense looked early, though, it grew stagnant with 44 combined points in the second and third quarters. For a time Tuesday, it appeared as if the Wizards missed Wall dearly considering he is often a source of instant offense with his ability to punish teams for their mistakes with his lightning speed in transition.

Antetokounmpo and Milwaukee deserve credit for battling back as well, as the Wizards didn't have an answer for him on either end.

He consistently used his athleticism to glide past the frontcourt defenders looking to stop him and then deftly dished it off when multiple defenders crashed on him. It wasn't all Antetokounmpo, however, as Jabari Parker spearheaded the attack off the bench for extended stretches and finished with 19 points and five boards.

Khris Middleton (17 points and six boards) and Eric Bledsoe (17 points) also contributed in the comeback effort, but the game came down to Beal connecting on his clutch three and Antetokounmpo just missing his counter in the final minute.

Washington will look to keep things rolling in a stiff test against the defending champion Golden State Warriors on Wednesday, while the Bucks will face the Detroit Pistons on the same day.