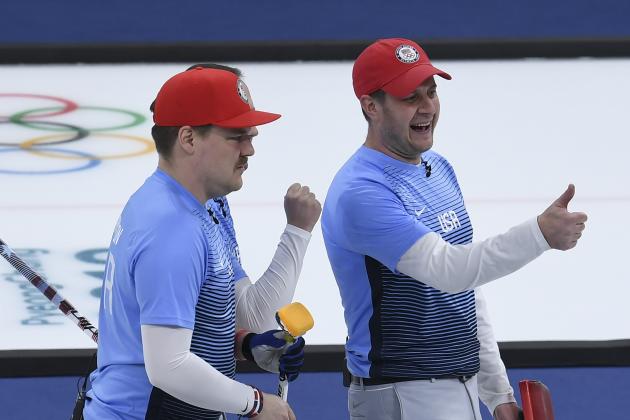 Would you believe the event of greatest U.S. interest is curling?

Sure, the USA could take a medal in the men's snowboard big air, and Joey Mantia is the world champion in the men's speedskating mass start. Heather Bergsma will also contend in the women's mass start.

But in curling, we know the U.S. men are taking a medal. We all want to see which one, even if it means pulling an all-nighter.

To watch live Olympics coverage, including the events detailed below, visit NBC's Olympics website. Reminder: South Korea is 14 hours ahead of Eastern Time, so an event that takes place Saturday morning in Pyeongchang will be on Friday night in the U.S.

Expectations weren't particularly high for the four-man U.S. bobsled team coming into these Olympics after the death of Steve Holcomb. But they certainly wanted to do better than they did in the two-man, where Justin Olsen was the only U.S. driver to qualify for the final run of 20 sleds, ending up 14th overall. Nick Cunningham finished 21st, while Codie Bascue placed 25th.

They're definitely capable of better. Bascue is young but still has a few World Cup podiums. Cunningham drove to 10th place in the 2014 Games in Sochi, Russia.

And Olsen has been here before, having won gold in the 2010 Games in Vancouver, Canada, as a push athlete in Holcomb's sled. He did pretty well in the two-man for someone who just had an appendectomy.

They might not medal, but they'll be looking for better runs on the first day of the four-man (7:30 p.m. ET, Friday).

It's a rare day with two snowboard events, and we have no shortage of storylines.

Three Americans, including slopestyle gold medalist Red Gerard, have qualified for the 12-rider big air final (8 p.m. ET, Friday). Gerard isn't quite as accomplished in big air as he is in slopestyle, but he'll have an outside shot at picking up a second medal before he turns 18.

But the sentimental favorite here is from Canada. Mark McMorris has two bronze medals in slopestyle, one from Sochi and one in South Korea. He also has eight X Games medals (including one in Europe) in big air and slopestyle in the past four years. He is running well less than a year after a backcountry accident left him with a broken jaw, broken arm, ruptured spleen, fractured pelvis, rib fractures and a collapsed lung.

As he put it: "Sorry for the silence ... I almost died and now I'm trying to get better."

Fellow Canadian Max Parrot is also among the favorites, and New Zealand is in the running for another extreme-sports medal, with Carlos Garcia Knight posting the top qualifying score.

If you prefer the serenity of parallel giant slalom, tune in for early men's and women's qualifying runs (7 p.m. ET, Friday) and then the knockout rounds (11:30 p.m. ET, Friday; finals approximately 12:28 a.m., Saturday).

It seems like a great idea, and it fits in with the trend toward mixed-gender teams. The format is head-to-head, with each team sending four skiers (two men and two women) down a short parallel giant slalom course. If the teams are tied 2-2, scorers will combine the times of the fastest man and fastest woman on each team, and the fastest combined time wins.

The problem, especially this year with all the Alpine rescheduling, is that the marquee skiers are all skied out.

So in this year's event (9 p.m. ET, Friday), the U.S. team will not feature Lindsey Vonn, Mikaela Shiffrin or Ted Ligety. Austria's Marcel Hirscher also said no, as did Norway's Aksel Lund Svindal and Kjetil Jansrud.

Say hello to Tricia Mangan, a late replacement on the U.S. squad for Pyeongchang. The rest of the U.S. team (six skiers to allow for alternates as needed): Megan McJames, Alice Merryweather, David Chodounsky, Mark Engel and Nolan Kasper.

Maybe we'll see a U.S. medal? Stranger things have happened. But France has Alexis Pinturault and Tessa Worley lined up to go, so we might call them the favorites.

We've seen people ski off giant ramps, and we've seen skiers race each other at high speed. But the final men's cross-country race may be just as extreme as any of them.

It's 50 kilometers. Do the math: It's a little more than 31 miles. Tune in (12 a.m. ET, Saturday) and get settled. It'll take two hours or more, depending on conditions.

It's also another chance for a Canadian medal. Alex Harvey won this event in the 2017 World Championships. That race was freestyle rather than classical, which will be the style of choice for the Olympics this year, but Harvey finished a solid fifth on classic skis in 2015.

We'll also see Norway's Martin Johnsrud Sundby take one more shot at an individual gold to complete his collection. The three-time overall World Cup champion has gold this year in the team sprint and the relay, along with a silver in the skiathlon and fourth place in the 15-kilometer freestyle.

You've had this date circled on the calendar since...a couple of days ago, when John Shuster's U.S. men completed an improbable charge from a bunch of early losses to the men's curling gold-medal game (1:35 a.m. ET, Saturday).

Shuster is an accomplished curler. He already has an Olympic medal, the bronze he won in 2006 playing lead (first rocks thrown, then a lot of sweeping) for Pete Fenson.

As a skip, he has been to the World Championship medal rounds two straight years, taking bronze in 2016. Both years, he has had the same team he has now—former skip Tyler George, mustachioed funnyman Matt Hamilton and dependable lead John Landsteiner. Even alternate Joe Polo, also part of that 2006 bronze-medalist team, has been with Shuster a while.

And he was an easily caricatured figure, often scrunching up his face in frustration. The word "Shustering" was added to American English, and it was not a compliment.

Now, with a series of staggering performances and a massive win over Canada, Shuster hasn't just silenced his critics. He's converted them. Even actress Kirstie Alley has gone from cynic to fan.

Slate has already suggested a movie based on Shuster's team. Imagine what happens if that team wins.

Given the absence of NHL players, a gold medal was far from a sure thing for Canada in the men's hockey tournament. But it's one thing to lose a close final to a loaded Russian team. A semifinal loss to Germany will certainly sting.

Canada can still take a medal in the Olympics. The team faces the Czech Republic for the bronze medal (7:10 a.m. ET, Saturday).

The teams faced off in the group stage, with the Czechs taking a shootout win after a 2-2 tie.

Don't look now, but the perplexing U.S. long-track speedskating squad is starting to heat up at last.

Skating superstars Brittany Bowe and Heather Bergsma, along with overachieving teammate Mia Manganello, sprinted out ahead of Canada in the team pursuit and held on for bronze, the U.S. women's first long-track medal since skating on home ice in 2002.

Then Joey Mantia, who earlier took eighth place in the 1,500-meters, finished a strong fourth in the 1,000-meters.

Mantia, Bergsma, Manganello and Brian Hansen are entered in the mass start, a new Olympic event but one in which the USA has had some success in World Championship and World Cup competition. Bergsma took bronze in last year's World Championships, and Mantia took gold.