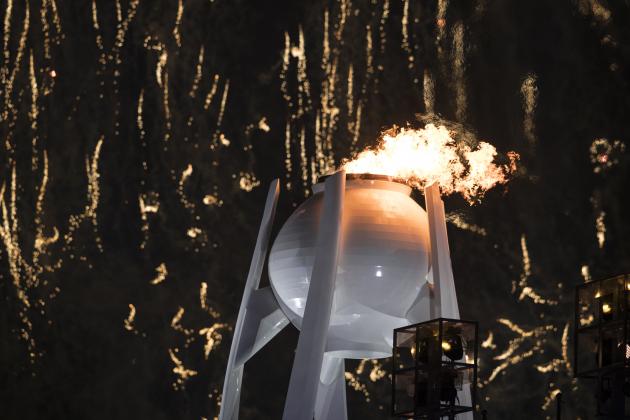 The final day of the 2018 Winter Olympics features two races, two games and the closing ceremony. The USA isn't involved in the two games and isn't likely to be a factor in the two races, so the Americans' medal haul should be set: 23 medals, nine gold.

But it's still a terrific day of competition that highlights the diverse sports of snow and ice that the Winter Olympics feature.

To watch live Olympics coverage, including the events detailed below, visit NBC's Olympics site. Reminder: South Korea is 14 hours ahead of Eastern Time, so an event that takes place Sunday morning in Pyeongchang will be on Saturday night in the U.S.

South Korea hasn't received as much of a home-ice boost as many Olympic hosts get. The USA's bump from a previous record of 13 to a massive haul of 34 in 2002 had a bit of an asterisk given the growth of the Games, particularly in sports in which the USA fares well.

This year's host country didn't pass its previous record of 14 medals, set in 2010, until the penultimate day, picking up two more speedskating medals and its first-ever snowboard medal. But South Korea has had some unusual successes.

Until this year, all of the country's medals had been in short-track speedskating (42), long-track speedskating (nine) and figure skating (two, both by Yu-Na Kim). This year, on home ice, South Korea has that first snowboarding success and its first skeleton medal—a gold from Yun Sungbin.

Going into the final day, the South Korean medal count stands at 15. They're poised to get another in bobsled (see next slide).

The hosts also will pick up their first medal in curling. It's a mild upset, but it's not as if this team came from nowhere. Skip Kim Eun-jung was a solid sixth in the 2017 World Championship. She's 22nd in the current Order of Merit standings, not far behind many of her Olympic peers. In January, she tied for third in the Canadian Open behind two Canadian teams that didn't make the Olympics and ahead of several teams that did.

On paper, South Korea will be the underdog against Sweden and powerhouse skip Anna Hasselborg in the final (7:05 p.m. ET). But Kim won their matchup in round-robin play a few days ago. And the fans have certainly made Gangneung Curling Centre a cozy home for the Korean team.

Germany and Canada have been battling for second place in the overall medal count. But unless Canada can get something out of the women's cross-country race or pull off a big comeback in bobsledding, Germany is going to win that battle, thanks in part to their men's hockey win over...Canada.

The Canadian hockey team took bronze, pushing the Canadian medal count to 29. They would've hoped to pick up a 30th in the four-man bobsled after Justin Kripps took gold in the two-man, but Kripps stands fourth after the first two runs.

Meanwhile, German sleds are first (Francesco Friedrich), third (Nico Walther) and tied for fifth (Johannes Lochner) heading into the the third (7:30 p.m. ET) and fourth (9:15 p.m. ET) runs of the four-run four-man competition. Germany has 28 medals heading into the day's action, with a 29th locked up in hockey.

Even in this unpredictable men's hockey tournament, Germany was not considered a contender. SNIP Daily ranked Germany near the bottom without its NHL players: "That leaves Deutschland with a batch of 15-plus skaters from the German DEL, a slow-motion old timers' league for NHL retirees and ham-and-egger Europeans." The only recognizable name is Marco Sturm, the coach.

And the Germans didn't give anyone a reason to think better of them in group-stage play. They opened with a 5-2 loss to Finland and a 1-0 loss to Sweden. They closed group play with a 2-1 win over Norway and followed up with two more one-goal wins over Switzerland and Sweden to reach the semifinals, where they seemed sure to fall to Canada.

But Patrick Hager's power-play goal gave Germany a 4-1 lead. Canada battled back to 4-3, but 33-year-old goalkeeper Danny aus den Birken, who has spent his entire career in Germany, withstood a late barrage, and Germany reached the Olympic final.

In the final (11:10 p.m. ET), Germany will face the Olympic Athletes from Russia, a team laden with KHL talent that shook off an opening loss to win four straight by three goals or more.

The last event of the Games is among the most traditional. Women's cross-country skiers will hit the course for the 30-kilometer classical race (1:15 a.m. ET). Just take your local 10K road race and imagine doing it three times through snow.

The U.S. women finally broke through with a medal in the team sprint, winning gold, but an American medalist here would be a surprise. This is Jessie Diggins' worst event, and she may be busy prepping for her role carrying the flag in the closing ceremony. Team sprint teammate Kikkan Randall, wrapping up her fifth Olympics, finished 23rd in this race in 2010. Liz Stephen is the best bet, placing 11th in the 2015 World Championships.

Norway swept this event, though it was run in freestyle rather than classical style, at the 2017 World Championships. Norway's Marit Bjoergen led the way in that sweep.

And Bjoergen has already broken the record for Winter Olympic medals. She tied the record with gold in the relay and took sole possession in the same team sprint that saw Randall and Diggins make history.

Thank you, South Korea. The venues have looked beautiful, and the reporters who usually find all sorts of problems with Olympic preparation haven't found anything to report.

The closing ceremony (6 a.m. ET for live stream without commentary, 8 p.m. ET Sunday for full production on NBC) is a last chance to gather all the athletes (at least those who haven't headed home for whatever reason or perhaps gone out to prepare for World Cup seasons to resume), and it's a ceremonial handoff to the next host.

That next host is Beijing, which will use some of the same venues that were used for the 2008 Summer Olympics.