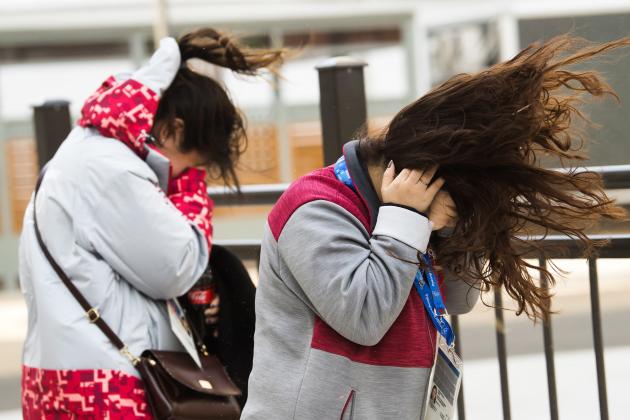 Here comes the wind again. And it's bringing some rescheduling.

You may have noticed Mikaela Shiffrin didn't race in the downhill. She's wary of competing on back-to-back days after missing the medals in the slalom, so when the combined was moved to Day 13 (along with the women's big air snowboard final), she decided not to compete in the downhill.

So the combined and the big air final join an already crowded agenda that now features 10 medal events. We'll have relays in biathlon and Nordic combined, another Alpine skiing race, three short-track finals, a possible U.S. sweep in halfpipe skiing and a hockey game we've been anticipating for four years.

To watch live Olympics coverage, including the events detailed below, visit NBC's Olympics site. Reminder: South Korea is 14 hours ahead of Eastern Time, so an event that takes place Thursday morning in Pyeongchang will be on Wednesday night in the U.S.

But don't expect a sweep. Anderson finished sixth in qualifying. Julia Marino was ninth, and Jessika Jenson took the 12th and final spot.

The leader is Austria's Anna Gasser, the world champion and World Cup leader. She also won the X Games last month. In qualifying for the big air event, she landed a cab double cork 1080. Video footage explains it better than words.

Mikaela Shiffrin's Olympics were supposed to be easier than this. The giant slalom (Feb. 12), slalom (Feb. 14) and super-G (Feb. 17) were spread out nicely to allow time for her to race, go to the likely medal ceremony, rest and then return. She would be able to train for the downhill (Feb. 21) and the combined (Feb. 23).

But the first two races were postponed. She finally raced the giant slalom Feb. 15 and won. The next day, in her best event (slalom), she was vomiting and failed to win a medal. She opted out of the super-G, which isn't one of her best events, anyway. Also, her boyfriend was sent home.

The downhill isn't her best event, either, but she was fifth, just behind eventual bronze medalist Lindsey Vonn, in the last training run. When the combined was moved to follow the downhill on back-to-back days, she decided to drop out of the downhill.

At least her downhill training runs won't be wasted. The combined consists of a downhill run (9:30 p.m. ET) and a slalom run (1 a.m. ET). As long as she can stay close in the downhill, which seems likely now, she has the slalom speed to make up any deficit.

And, yes, Vonn is competing one more time in this event.

A medal sweep is never a sure thing. You could have the three fastest 100-meter runners in the world, and on any given day, a little hiccup at the start can ruin that 1-2-3 finish. In judged sports, it's less predictable. (Unless it's ice dancing.)

But the U.S. men have a serious shot at pulling it off in the men's ski halfpipe final (9:30 p.m. ET). They took the top three spots in qualifying.

A fourth American is in the final 12 as well. He's David Wise, who happens to be the defending Olympic and X Games champion.

The U.S. women's hockey team has waited four years to avenge what happened in four minutes.

Leading 2-0 in the 2014 Olympic final with three minutes, 26 seconds to play, the USA gave up two goals to its nemesis and then lost in overtime. Since then, USA has won three straight World Championship finals over Canada, but this date has been circled on the calendar for a long time.

Canada won the group-stage showdown, but the U.S. women took a lot of positives from the game, particularly the 45-23 shot count in their favor.

For the fifth time in six Olympics, USA and Canada have reached the final (11:10 p.m. ET). USA hasn't won it, though, since the first women's hockey Olympic tournament in 1998.

USA has an outside shot at a relay medal. All it has to do is win the "B" final and then hope two teams are disqualified in the "A" final. Sounds far-fetched, but it happened in the women's relay. That's how strong Dutch speedskaters are. They win even without being on the ice.

Watch out, Italy. Germany owes you one.

In the biathlon mixed relay, Germany had a substantial lead until anchor Arnd Peiffer missed two shots from the prone position and three from the standing position. He was racing with Italy's Dominik Windisch for bronze. Coming up to the finish, Windisch abruptly changed lanes and cut off Peiffer.

The men have to wait another day for a shot at revenge. But the women will be ready to claim a medal in their relay (6:15 a.m. ET), perhaps a third gold for Laura Dahlmeier in these Games.

And that might be Germany's second relay medal of the day on the rolling hills of Alpensia. The Nordic combined relay starts with the ski jump (2:30 a.m. ET) and concludes with the cross-country race (5:20 a.m. ET). Germany swept the medals in the individual large hill event.

John Shuster and the U.S. men are on a tear.

After losing to Norway a couple of days ago, they were 2-4. The chances of reaching the medal round were not good.

Then Shuster and Co. beat Canada in an extra end. Then Shuster shot 97 percent, basically the curling equivalent of passing for 400 yards and four touchdowns, as USA beat Switzerland 8-4. Then they engineered a steal of four to beat Britain, 10-4.

Between those three wins and a few other results, the U.S. men didn't even need a tiebreaker to reach the semifinals. They'll face Canada (6:05 a.m. ET) for a spot in the final.

At the same time, Sweden will play in the other semifinal against the winner of the tiebreaker (7:05 p.m. ET) between Britain and Switzerland.