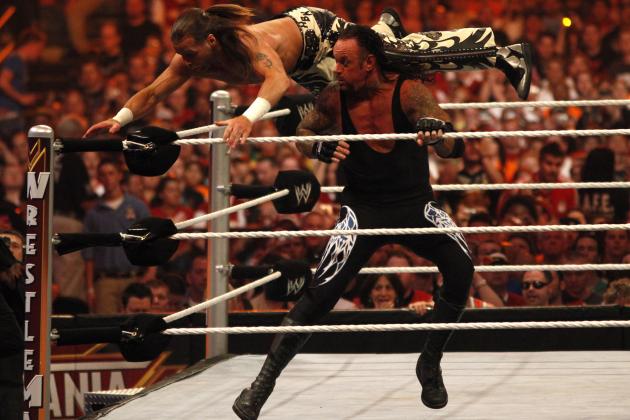 While hundreds of Superstars have helped shape WrestleMania into the global spectacle it is today, it can be argued two people stand out above the rest in terms of making The Showcase of the Immortals a longstanding success.

Shawn Michaels is known as Mr. WrestleMania because of his remarkable performances on The Grandest Stage of Them All, and many of his matches stand up as the best to ever take place at WWE's biggest event.

While The Deadman prevailed in each of his two WrestleMania matches against Michaels, here is a breakdown of their respective WrestleMania careers to determine who deserves the Mr. WrestleMania moniker.

A list of the best matches to take place at WrestleMania would undoubtedly feature both Michaels and The Undertaker many times over.

When taking into consideration their overall body of work, however, The Heartbreak Kid gets the nod over The Phenom when it comes to WrestleMania match quality.

Taker has also had strong 'Mania matches with CM Punk, Triple H, Batista and Edge, to name a few, but it took many years for him to hit his stride on the WrestleMania stage.

Conversely, Michaels' first great WrestleMania match was his ladder match with Razor Ramon at WrestleMania X, and he never had a subpar 'Mania contest thereafter.

Michaels' performance level also never dropped off near the end of his career at WrestleMania, while Taker had less-than-stellar matches with Brock Lesnar, Bray Wyatt, Shane McMahon and Roman Reigns.

The middle portion of The Undertaker's WrestleMania career was elite, but the beginning and end left something to be desired. Michaels, however, never looked back after his incredible match against Ramon.

Kayfabe plays a role in determining the success a wrestler had over the course of their career, and nobody did better at WrestleMania in that regard than The Undertaker.

After that, Taker won WrestleMania bouts over Bray Wyatt and Shane McMahon before he lost to Reigns at WrestleMania 33, which gives him an overall record of 23-2 at The Show of Shows.

Michaels is nowhere near that mark, as his win-loss record is among the worst in WrestleMania history among Superstars with at least 10 matches.

He had some big wins to his credit, including the WrestleMania XII Iron Man match with Hart, but most of his best performances came in losing efforts.

That has more to do with WWE's booking decisions than Michaels' ability, and it speaks to HBK's willingness to put over his opponents despite the narrative that he held talent down during his run at the top of the company.

The Undertaker is undoubtedly deserving of his WrestleMania record, though, and it is a big reason why he has become such a mythical and well-respected figure in the annals of professional wrestling history.

If Taker had a record similar to Michaels' WrestleMania mark, he would still be considered great, but the aura that surrounds him likely wouldn't be present.

The Phenom has been nearly unbeatable at 'Mania, and that counts for plenty when it comes to determining the true Mr. WrestleMania.

A WrestleMania moment is difficult to define, and the only way to know what it is requires the viewer to witness and feel it for themselves.

Michaels made a career out of conjuring memorable WrestleMania moments.

The Phenom made plenty of memories in a Hell in a Cell match against Triple H at WrestleMania XXVIII, but HBK once again had a ton of involvement since he served as the special guest referee for that contest.

It isn't entirely The Undertaker's fault he had fewer WrestleMania moments than Michaels given he was tasked with pulling off some difficult matches early in his WrestleMania career.

Along with virtual squashes against Jimmy "Superfly" Snuka and Jake "The Snake" Roberts, Taker had to carry the likes of Giant Gonzales and King Kong Bundy.

Meanwhile, Michaels' list of WrestleMania opponents is a roll call of current or future Hall of Famers who made life far easier on him and helped him in terms of creating great moments.

Fans will always remember The Undertaker's streak, but when it comes to remembering individual moments at WrestleMania, HBK has him beat.

One of The Undertaker's greatest assets is the fact WWE was able to count on him on The Grandest Stage of Them All for well over two decades.

The same can't be said for Michaels, as he missed WrestleMania 13 and then sat out every WrestleMania from XV through X8 after taking a hiatus to deal with a severe back injury.

Remarkably, The Undertaker has had seven more WrestleMania matches since then, and while not all of them were great, his encounters with Triple H and CM Punk were high-caliber clashes.

The Undertaker's 25 WrestleMania matches beat out Michaels' 17 substantially, which is amazing considering HBK got a leg up with some WrestleMania tag team matches alongside Marty Jannetty as The Rockers before Taker debuted in WWE.

Multiple generations of wrestling fans are familiar with The Undertaker because of the fact he has continued to show up on The Grandest Stage of Them All year after year like clockwork.

Nearly the entire history of WrestleMania has included The Undertaker in one way or another, while Michaels has come and gone at various times.

HBK made his WrestleMania matches and moments count, but there is no denying that The Deadman was more reliable in terms of being there almost every single year.

With the right to be called Mr. WrestleMania on the line, The Undertaker and Michaels are even, which requires the use of a tiebreaker.

While determining who meant more to WrestleMania is a matter of preference, the fairest way to put one above the other is by considering who benefited more from the other in their WrestleMania meetings.

Both Taker and HBK were fantastic at WrestleMania XXV and XXVI, and there is no definitive way to decide whether one of them put on a better performance.

In terms of their WrestleMania resumes as a whole, however, there is little argument to be made against the idea that his WrestleMania XXV and XXVI's contests against Michaels were The Undertaker's two best 'Mania matches.

Those were likely HBK's best 'Mania matches as well, but it isn't as cut and dried. His clashes with Ramon, Hart, Jericho and Angle are all in the same neighborhood, and his Triple Threat match with Triple H and Chris Benoit is arguably in the mix as well.

Michaels also had better overall matches against common opponents, with his bout with Flair standing out as the most glaring example of that.

The margin between Michaels and The Undertaker is razor-thin, and there simply isn't enough of a difference to take the Mr. WrestleMania nickname away from The Showstopper.