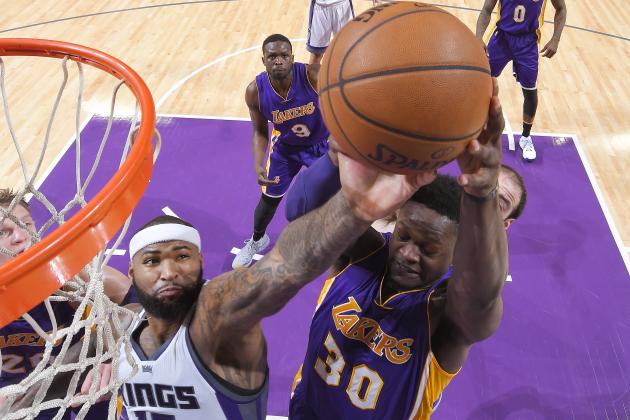 The young Los Angeles Lakers can be fun to watch and should only improve with time. But clawing their way back into playoff contention this season will be a tall order unless they upgrade the roster through a midseason trade.

At issue especially is a lack of defensive fortitude and a perplexing tendency to hand away early leads.

The dilemma is whether to sacrifice talent that's yet to reach full maturation—such as D’Angelo Russell, Julius Randle and rookie Brandon Ingram—in return for a possible quick-fix solution.

Do the Lakers hang on to Russell and hope his recent knee issue doesn’t become a long-term concern? Or can they deal away a pricey veteran like Luol Deng?

There’s no shortage of questions, but there are also some potential trade targets out there worth considering.

Note that what follows is not a series of specific trade scenarios, but an examination entering the New Year of which trade targets from around the league could help the Lakers this season.

The Lakers could use a young backup point guard with future potential—Jose Calderon and Marcelo Huertas don’t fit that bill.

The former Duke star was on fire during Las Vegas Summer League, scooping up MVP honors and averaging 20.4 points, 6.8 dimes and 1.4 steals per game.

But the 6’2” ball-handler hasn’t gotten much burn since then, apart from filling in nicely when Ricky Rubio was injured in early November. Since then, Jones has mostly watched from the sideline.

During the preseason, The Vertical’s Adrian Wojnarowski noted the Wolves were open to moving Jones. It’s doubtful that has changed much with head coach and front office chief Tom Thibodeau craving results for a team dwelling near the bottom of the pack in the Western Conference.

It would be easy to envision Jones developing in Luke Walton’s open court offense, and his rookie contract would be highly affordable.

Defensive intensity ranks high on the list of needs in Lakerland, and Tony “the Grindfather” Allen is all about being a deterrent.

It’s true that the 34-year-old has grown long in the tooth. But the Lakers shouldn't be averse to having veterans on their mostly young squad, especially if said vet can still lock down the league’s elite scorers.

According to Memphis Grizzlies beat writer Ronald Tillery of The Commercial Appeal, the team is “listening” as other organizations express interest. Allen will be an unrestricted free agent at the end of the season, and his current salary is only $5,505,618. Interestingly, L.A.’s Nick Young—in the midst of a startling renaissance this season—is making almost the same amount at $5,443,981.

Last summer, the Lakers would have jumped on a swap like that. But Swaggy P has developed a defensive spine since then and is converting a lights-out 42.8 percent from beyond the arc. Meanwhile, Allen is still a stopper, not a shooter.

Regardless of trade specifics, Allen’s fierce presence would be an intriguing addition to the team.

One thing the Lakers are truly lacking is a stretch big man. The Boston Celtics’ Jonas Jerebko fits that role nicely and will also be an unrestricted free agent at the end of the season. His $5 million expiring contract will cause plenty of teams to come nosing around as the trade deadline approaches.

The Lakers thought they had their frontcourt floor-spacer in Yi Jianlian when they signed the Chinese star during the offseason. But the former lottery pick never found his footing during his brief NBA comeback attempt.

Jerebko is a dependable option off the bench for Boston, averaging 4.7 points in 16.8 minutes per game while completing a solid 37.5 percent of his shot attempts from behind the arc. He can get hot in a hurry as an in-rhythm catch-and-shooter. He’s a versatile defender and has a true knack for tracking rebounds.

The Celtics will have to make a decision this summer whether to sign Jerebko to a new deal or let him walk. Complicating matters is Al Horford’s massive contract as well as the impending free agency for starting power forward Amir Johnson and key backup center Kelly Olynyk.

The Lakers should see what it would take to acquire Jerebko for a midseason test drive. If it works out, they’d be in the driver’s seat to offer him a nice bump from his present salary, and perhaps more minutes than he’s currently getting in Beantown.

Nerlens Noel is on everybody’s trade radar right now. The reasons are obvious—the 22-year-old center for the Philadelphia 76ers has been vocally displeased about his role since returning from an injury layoff that caused him to miss 23 games.

The big man has averaged 12.2 minutes per game since then, although he did log in 19 minutes off the bench in a win against the Denver Nuggets Friday.

It’s a messy situation. Head coach Brett Brown has to balance egos, skill sets and deal with being in last place in the East. And, the team is loaded with other big men, including Joel Embiid, Jahlil Okafor and Ersan Ilyasova.

General manager Bryan Colangelo added more subtext to Noel’s dynamic when saying, per Philly Magazine’s Derek Bodner, that the team is “trying to determine whether or not he’s a fit for this roster.”

Complicating potential trade scenarios for other teams is Noel’s injury history (he missed his entire first NBA season while rehabbing from knee surgery) and his upcoming status as a restricted free agent.

Noel’s candidacy with the Lakers would come with a slew of red flags. But one thing is certain: He’s a shot-blocking beast who sets killer screens, snags rebounds with aplomb and has an intuitive defensive awareness.

It’s difficult to ignore the idea of trading for DeMarcus Cousins, the mercurial center for the Sacramento Kings. The big man in the middle is a veritable stats monster with a team-leading 29.0 points per game this season, along with 10.7 rebounds, 3.7 assists and 1.4 blocks.

Would the Kings actually consider abandoning their star? There’s evidence that the idea has been broached in the past.

Former Kings head coach George Karl reportedly acknowledged in his upcoming book that the team talked with the Lakers about trading Cousins, per Sean Cunningham of ABC 10 in Sacramento.

But Karl is no longer with the team and the Kings are currently hovering around eighth place in the Western Conference standings. Even if Sacramento were to revisit the notion, the price for Cousins would be high—likely a package involving L.A.’s top young players.

Would it be worth blowing up a squad that is showing progress under Walton? ESPN’s Zach Lowe isn't a fan of the notion in his recent piece about L.A.’s young nucleus, saying, “It’s too early to short-circuit that for DeMarcus Cousins as the centerpiece on a gutted team with an uncertain path toward max-level cap space.”

It’s easy to see the rationale of that argument when the Lakers’ young guns are flying up and down the court and doing good things. But the team has gone 2-8 in its last 10 games and hasn't shown much fighting spirit.

And Boogie is nothing if not a scrapper.

Stats are courtesy of NBA.com and Basketball-Reference and are current as of the start of games Sunday, Jan. 1. Contract information is courtesy of Spotrac, unless noted otherwise.