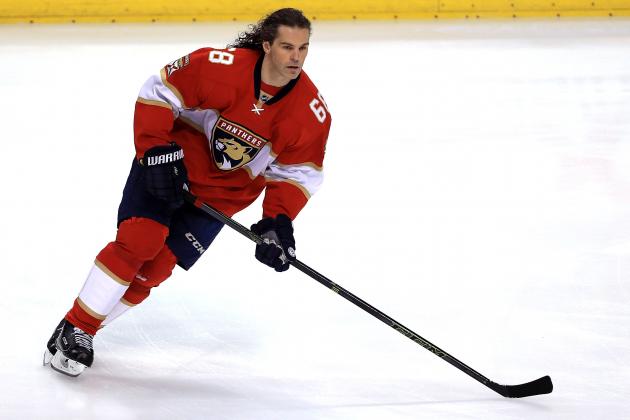 Florida Panthers winger Jaromir Jagr tied Mark Messier for second-most points in NHL history with 1,887 in Tuesday's 4-3 shootout victory over the Buffalo Sabres. He reached the total in 94 fewer games than Messier, per Sportsnet Stats.

Not only did the veteran winger reach that mark, but he did so in dramatic fashion.

Jagr finished the night with three assists, becoming the first player ever to record multiple three-point games at age 44 or older, per the Elias Sports Bureau (via ESPN Stats & Info). The only other player to previously record one such game was Detroit Red Wings great Gordie Howe.

Jagr spent the first 11 seasons of his NHL career playing with Mario Lemieux as a member of the Pittsburgh Penguins and hoisted the Stanley Cup in each of his first two NHL seasons. While he hasn't won another championship since then, Jagr does have nine All-Star Game appearances and 10 different individual awards to his name.

A native of Czechoslovakia (now the Czech Republic), Jagr hasn't spent the entirety of his career playing in the NHL. Along with a handful of short seasons in the Czech Republic, Jagr was also out of the NHL for three years from 2008-09 to 2010-11.

He instead opted to play for Avangard Omsk Region of Russia's Kontinental Hockey League over that span. Jagr totaled 145 points in 155 games in his three KHL seasons, giving him 2,032 career points in 1,817 games between the two leagues, per Sportsnet Stats.

Jagr will receive his first chance to break his career point tie with Messier on Thursday when the Panthers host the Boston Bruins.

It's unrealistic to believe Jagr will catch NHL all-time points leader Wayne Gretzky (2,857), but he's not showing any signs of slowing down at age 44.