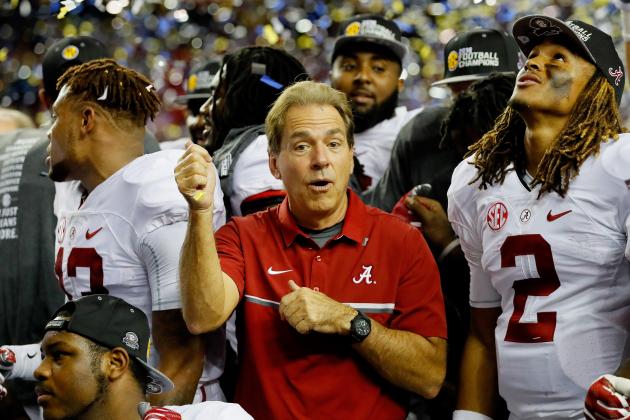 Which team will win the College Football Playoff?

Alabama is the clear favorite to hoist the championship trophy in Tampa, Florida, on Jan. 9. With its dominance this year, it would be easy to just coronate Nick Saban and the Crimson Tide right now.

However, Alabama has also been the favorite the past two years. In 2014, it got gashed in the CFP semifinals by an Ohio State team peaking at just the right time. Last year, the Crimson Tide got all they could handle from Clemson in the championship game.

So, let's not award the title to Alabama just yet. Clemson, Ohio State or Washington could emerge as the upset champion.

The win probabilities in the figure below come from my analytics at the Power Rank. These numbers, which use data from both games and markets to predict the future, have driven the Bleacher Report playoff odds report for the past three seasons. 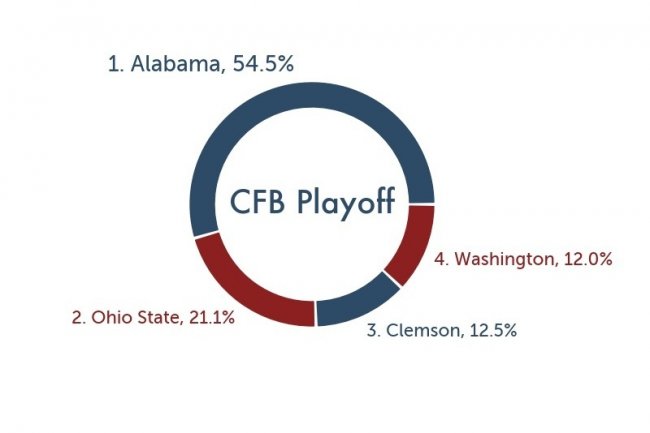 My numbers confirm Alabama's status as the clear favorite, as the Tide have a 54.5 percent chance to win the playoff. But the Buckeyes remain relevant with a 21.1 percent chance.

The Tigers and Huskies bring up the rear with a 12.5 and 12.0 percent chance to win the playoff, respectively.

Now, let's use analytics to break down the two semifinal games.

This preseason, Alabama had a question mark at quarterback. But true freshman Jalen Hurts won the job and never looked back, as he has completed 65.2 percent of his passes and also gained 5.2 yards per carry.

The Crimson Tide defense has maintained its typical dominant form, allowing a national-best 3.9 yards per play despite facing a difficult SEC schedule. This unit has performed equally well against both the pass and run.

With this type of dominance on both sides of the ball, what chance does Washington have?

The Huskies will need the game of a lifetime from quarterback Jake Browning, who has led an efficient pass offense that has gained 8.6 yards per attempt, which ranks ninth in the nation. (These numbers include sacks, unlike traditional college football statistics.) Browning struggled against Utah and USC, however, and the semifinal clash against the best defense in the nation could be even more difficult. 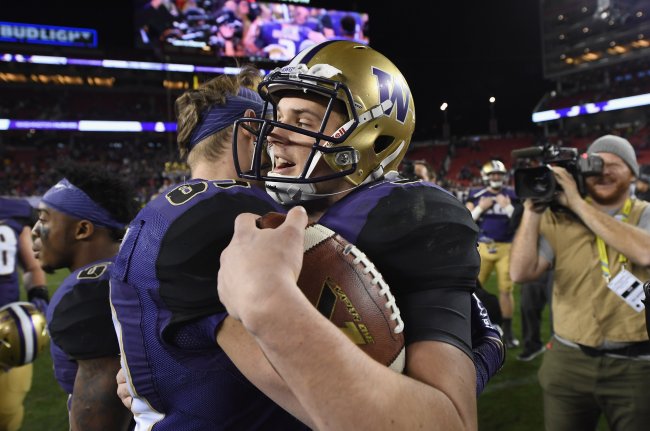 The Washington defense has also excelled this year, allowing a meager 4.6 yards per play, which ranks fourth in the nation. Its excellence continued throughout the season despite the loss of top tackler Azeem Victor in mid-November.

The markets favor Alabama by over two touchdowns in this game. This might seem like too many points to lay, especially since my numbers make the Crimson Tide an 8.9-point favorite. In addition, Alabama will be without injured linebacker Shaun Dion Hamilton and his nine tackles for loss.

However, the talent gap between the Crimson Tide and Huskies is large. Alabama consistently recruits the top class in the nation, while Washington has recently struggled to land top-25 classes. In my recruiting analytics that take a weighted average over four seasons, Washington ranks 33rd.

Chris Petersen has elevated this Huskies team well above its recruiting rankings. But Washington will find life difficult against a more talented team with equivalent—and arguably superior—coaching.

Both of these teams entered the season with question marks on defense. Ohio State and Clemson lost six and seven starters to the 2016 NFL draft, respectively.

But both the Buckeyes and Tigers fielded elite defenses again this season. Ohio State ranks third in the nation, allowing 4.2 yards per play, while Clemson isn't too far behind at 4.6 yards allowed per play, which ranks sixth.

With this strength on defense, this semifinal will likely come down to which offense has the better game.

The Buckeyes will try to run the ball, as they have on 57.2 percent of their plays this season. Redshirt freshman tailback Mike Weber has averaged 6.1 yards per carry, and dual-threat playmaker Curtis Samuel has been even better with 7.7 yards per carry. 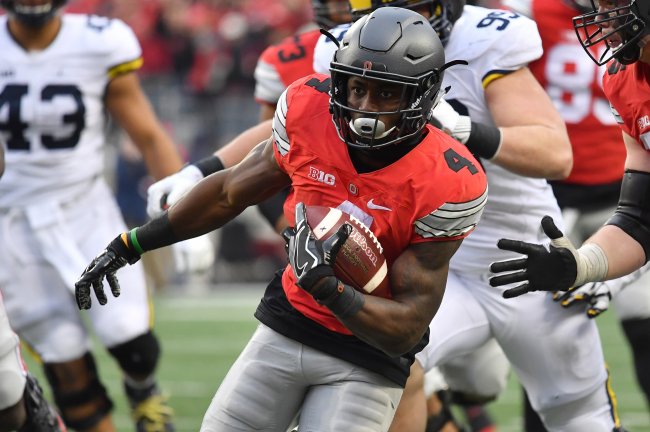 Ohio State will need to have success running the ball since quarterback J.T. Barrett has struggled throwing it. He's completed just 61.8 percent of his passes in 2016, which is a lower rate than he recorded in each of the past two seasons. In addition, Clemson excels at defending the pass.

Conversely, the Tigers have struggled to run the ball, so they will rely on the arm of quarterback Deshaun Watson. This will play to the strength of the Buckeyes defense, though, which has allowed 4.6 yards per pass attempt—the fourth-best mark in the nation.

My numbers make Ohio State a 2.7-point favorite. If the Buckeyes get a lead, they can make Clemson throw against their elite secondary for most of the second half.

If the Tigers take the lead, however, Ohio State will find it difficult to make plays in the passing game. Clemson has a 42 percent chance to pull the upset by my numbers.

Ed Feng is Bleacher Report's playoff probability guru and runs the sports analytics site the Power Rank. Stats are provided by The Power Rank unless otherwise noted. You can find Ed on Twitter: @thepowerrank.