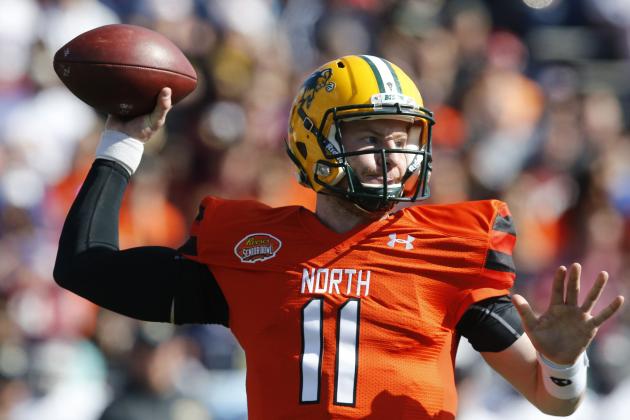 The 2016 Senior Bowl was a terrific opportunity for NFL prospects to prove their talent among the nation’s best seniors and fourth-year juniors. Coming off an intense and critical week of practices, Saturday’s contest culminated in an exciting 27-16 victory for the South squad. More important than the score was how each individual competed and performed.

The Senior Bowl offers a unique opportunity to face the nation’s best players on a big stage. While there are key matchups that take place during the season, it is easier to see which players stand out the most in this setting. Participants that clearly pop out while among other All-Stars are the guys who will likely have an easier time transitioning to the NFL.

Throughout the Senior Bowl game, impact plays were made for each team. As players rotated, we had the chance to see 94 individuals earn playing time. From that, we have eight big takeaways from what happened in the game.

Tape from the 2016 Senior Bowl shouldn’t supersede what happened in the season, but it can be very useful. Watch for the players who excelled to receive more attention, and those who struggled to receive less hype.

The hype train for North Dakota State Thunder quarterback Carson Wentz is full-speed, with the 6’5”, 233-pound signal-caller earning top-five overall buzz recently. The sudden rise of Wentz’s stock led to high expectations for the Senior Bowl. Wentz played the first quarter, but he struggled to stand out among his peers.

While Wentz has great size and good arm strength, there is a lot more to the quarterback position than those traits. He completed six of 10 passes for just 50 yards, and two other passes were dropped. Only one completion went for more than nine yards, and that was Ohio State Buckeyes tight end Nick Vannett’s 29-yard reception, when Vannett was uncovered on a seam route down the middle of the field.

Wentz took two sacks and was stripped on the second one. He is still very much a project as a pocket passer, even if he has the physical tools teams lust for. The Senior Bowl game simply reinforced what Wentz’s film is littered with.

That doesn’t make Wentz a bad prospect, at all. But it is clear he is not a top-five player in the 2016 class. Whoever drafts him will need a distinct, long-term plan to ensure he gets the development he needs to succeed.

Former Ohio State and Eastern Kentucky Colonels star pass-rusher Noah Spence had a lot to prove at the Senior Bowl. With teams needing to know that his off-field issues of the past won’t resurface, Spence likely interviewed with a vast majority of teams—if not every team—in some capacity. At least on the field, there aren’t many questions left about the defensive end.

Spence was all over the place Saturday, posting two tackles and one sack. He had the opportunity to finish several other plays behind the line of scrimmage, including a sack that Stanford Cardinal quarterback Kevin Hogan broke out of, only to be sacked by Baylor Bears defensive end Shawn Oakman. Spence's disruptiveness is impossible to miss.

What makes him so special is his playing speed. He’s often just too quick and sudden for blockers to handle without help. This was evident at Ohio State and Eastern Kentucky as well.

Expect the momentum to swell for Spence as the NFL Scouting Combine arrives. His athleticism made him one of college football’s elites this year. He’s a top-10 prospect for NFL teams running a 3-4 defense.

While Carson Wentz disappointed, the other quarterbacks had more success with their playing time. Most notably, it was Arkansas Razorbacks quarterback Brandon Allen and Mississippi State Bulldogs quarterback Dak Prescott who stole the show. Prescott played well enough to earn Senior Bowl Most Outstanding Player honors, according to Aaron Wilson of the Houston Chronicle.

Allen was the most impressive passer for either team. Despite size concerns, he throws a tight ball to all levels of the field. He finished 7-of-10 passing with 106 yards and advanced the ball downfield better than anyone else.

Due to his size, Allen may slip in the draft. He’s 6’2” and 210 pounds, with 8½” hands. It doesn’t affect his play, but NFL teams have size standards, especially when it comes to hand length. His performance helps show he is at least backup-quality as a rookie.

Prescott has more bulk to his frame, at 6’2” and 230 pounds. He greatly improved as a senior and is also deserving of a mid-round investment. He completed seven of 10 passes for 61 yards and one touchdown. He also ran for 13 yards.

One reason the quarterback play was largely suspect was the excellent play of the safeties. Both the North and South teams had impressive safety play throughout the game. Boise State Broncos star Darian Thompson earned Most Outstanding Player for the North, per Wilson.

Thompson had five total tackles and two pass breakups, including a near-interception of Prescott. He is an impact free safety who offers run-stopping ability as well as great coverage talent. He could be an early Day 2 pick.

The depth was impressive, as the West Virginia Mountaineers' K.J. Dillon and Ohio State’s Tyvis Powell also had good showings for the North team. The LSU Tigers' Jalen Mills and the Middle Tennessee State Blue Raiders' Kevin Byard flashed NFL athleticism and talent for the South.

The NFL desperately needs safety talent, and these five certainly looked the part on Saturday. They combined for 16 tackles between the five safeties.

The Senior Bowl proved to be a good showing for all running backs involved in the game. The North team had two backs, the San Jose State Spartans' Tyler Ervin and the Louisiana Tech Bulldogs' Kenneth Dixon, combine to produce 16 carries for 66 yards. Ervin also added another 42 receiving yards. The South squad was even more productive, with its top three backs totaling 20 rushing attempts for 94 yards and two touchdowns.

TCU Horned Frogs running back Aaron Green had the most impressive performance of all. He had a highlight reel-worthy 25-yard touchdown run that emphasized his playmaking ability. His 34 yards on just five carries helped remind evaluators why he was a premier back in college the past few seasons.

Alabama Crimson Tide running back Kenyan Drake and Texas Tech Red Raiders back DeAndre Washington were also efficient with their workload. Drake started the game, and he tallied 47 total yards as a runner and receiver. Washington led the South with 36 yards on eight carries.

The North running backs were led by Ervin. Ervin is a smaller running back, standing 5’10” and 192 pounds, but that didn’t stop him from standing out. He finished with 11 total touches for 81 yards.

Since the running backs were getting so much work for each team, each linebacker core had the chance to shine. The results were a mixed bag, though. We saw some strong plays from a few linebackers, but several proved to be physically limited.

The linebackers who played well include the LSU Tigers' Deion Jones, the Missouri Tigers' Kentrell Brothers and the Florida Gators' Antonio Morrison. Oklahoma Sooners linebacker Eric Striker also had three solid tackles. Each showed the desired athleticism to be a three-down player and is trending upward.

All of the best linebacker play came from the South side. With a total of 18 tackles between the four main linebackers on the South, the North team struggled to produce offensively. It made its tackles count.

On the North side, it was Tyler Matakevich from the Temple Owl and the Stanford Cardinal's Blake Martinez who racked up tackles. Matakevich had eight total tackles but was completely exposed in coverage multiple times. As instinctive as he is, his lack of speed and sideline-to-sideline ability will lower his value.

As hard as it is to jump from FBS football to the NFL, players from the FCS level have the greatest hurdle. Sometimes this doesn’t matter and small-school prospects make an immediate impact at the next level. It seems several prospects from this game have a good chance to become solid professionals as soon as this year.

It’s somewhat unusual to see such production from small-school talent in this game, but the pool was deep in quality and quantity this year. Don’t be surprised if several of these players are making an impact next year.

The Senior Bowl game started out as a low-scoring affair, thanks in large part to a dominating defensive line. Both offensive lines had their hands full throughout the day, and we saw terrific individual performances. The standouts' combination of power and speed is what separates them from the individuals who didn’t receive an invitation to play in this game.

On the South team, it was Alabama’s Jarran Reed, the Virginia Tech Hokies' Dadi Nicolas, Baylor’s Shawn Oakman and the South Carolina State Bulldogs' Javon Hargrave doing major damage. That group of four accounted for three of the team’s four sacks and 3.5 of their seven tackles for loss.

The North squad boasted the Notre Dame Fighting Irish's Sheldon Day, Ohio State’s Adolphus Washington and Louisiana Tech’s Vernon Butler. Day was all over the place, winning from different positions across the defensive line. He is a stud no matter where he lines up.

Washington and Butler proved to be powerful mammoths in the middle of the defense. Washington has more pass-rush prowess, and he earned a tackle for loss for his work. Butler is a menacing one-technique in a 4-3 front, commanding double-teams. Each of these North team linemen should be Day 2 picks at worst.

All stats used are from SeniorBowl.com.