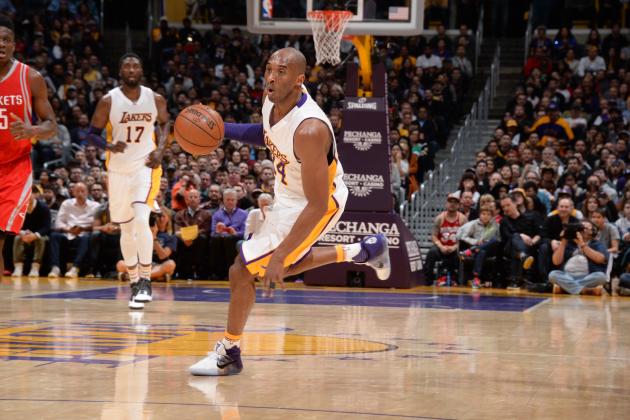 Los Angeles Lakers guard Kobe Bryant used a big first-quarter performance in Sunday's 112-95 loss to the Houston Rockets to move past Hall of Famer Jerry West for the second spot on the franchise's all-time assists list, per Mark Medina of the Los Angeles Daily News.

Often criticized for his shooting volume earlier this season, Bryant came out with a pass-first mentality Sunday night, picking up seven assists in the first quarter alone.

He helped the Lakers take a 36-32 lead by the end of the opening frame, but with the Rockets dominating for the rest of the night, Bryant finished with just five points, nine assists, two rebounds and a steal over 24 minutes, with his impressive passing performance partially marred by four turnovers.

The 37-year-old lifetime Laker ended his night with 6,244 career assists, putting him six ahead of West (6,238) on the all-time franchise leaderboard, which is of course topped by legendary point guard Magic Johnson, who piled up 10,141 assists during a 13-season career that was spent entirely with the Lakers.

Johnson ranks fifth on the all-time assists list for the entire NBA, with Bryant checking in at 28th and West right behind at 29th.

Given that he would need 209 more assists to match Reggie Theus (6,453) for 25th place on the all-time list, Bryant will likely have to settle for a spot just outside of the top 25 when he finishes his career at the end of this season.