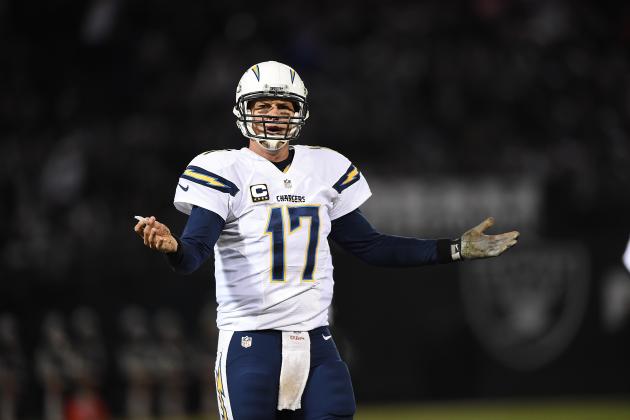 The San Diego Chargers had hoped to spoil possibly the last home game for the Oakland Raiders at O.co Coliseum, but they came up a little bit short in a hard-fought battle between division rivals on Christmas Eve.

Sebastian Janikowski kicked a 31-yard field goal in overtime, and the Raiders stopped the Chargers on fourth down to preserve a 23-20 win.

Our players fought until the bitter end (but) unfortunately, we didn’t get it done.

It was a tough loss for our football team.

The Chargers led 17-10 at the half after getting touchdowns from Donald Brown and Dontrelle Inman, and a 47-yard field goal from Josh Lambo.

But the Raiders climbed back in the second half, trimming the deficit to five on a safety in the third quarter, then following with a three-yard touchdown pass from Derek Carr to Michael Crabtree and a two-point conversion for their first lead of the game at 20-17 with 4:42 left.

Philip Rivers got the Chargers in field-goal range with less than a minute remaining, and Lambo connected on a 45-yard attempt to tie the game at 20-all.

The Raiders swept the Chargers for the first time since 2010, and gave defensive back Charles Woodson a proper send-off in his final home game, as he gets closer to retirement after this season. Honestly, San Diego had a real shot at winning, but like McCoy said, they just couldn't get it done.

Here are this week's post game grades, notes and quotes for San Diego.

Philip Rivers completed 31 passes for 277 yards and a touchdown against the Raiders for a good performance but not a great one. Had he been able to lead San Diego on one more game-tying drive in overtime, or possibly the winning touchdown, then we're talking a great performance. But without his top receiver, rusher and a crumbling offensive line, he's fighting an uphill battle.

Donald Brown started the game on a positive note with a short touchdown run to put San Diego up 7-0 in the first quarter, but he finished with just 17 yards on 14 carries. Danny Woodhead, meanwhile, was kept out of the end zone after scoring four touchdowns last week, and he totaled 70 yards from scrimmage.

What a breakout performance by Dontrelle Inman to catch eight passes for 82 yards and a touchdown, but there were several drops in the receiving corps, and Inman was among them. Malcom Floyd and Javontee Herndon had three catches apiece, but it was mostly Inman getting open for the Chargers, as he was targeted 13 times by Rivers.

Ladarius Green couldn't properly secure a catch in the end zone, leading to a 30-yard touchdown being waved off, but by far the biggest blunder by a tight end was David Johnson's fumble in the fourth quarter that led to a touchdown for the Raiders on the other end.

Rivers was sacked just once behind an offensive line that had one starter out and two others leave due to injury, but it went for a safety. Joe Barksdale, moved from right tackle to left tackle mid-game, couldn't keep Denico Autry in front of him, and Rivers had nowhere to run backed up in his own end zone. Also, right guard D.J. Fluker was called for three penalties.

Kendall Reyes didn't wait long to come up with a big play on defense, tipping Derek Carr's first pass attempt and making the interception all in one. Reyes' first career interception led to the opening touchdown for San Diego and set the tone on defense.

Denzel Perryman was everywhere the ball went, compiling a team-high 11 tackles, 10 of them coming solo, but a costly unnecessary roughness penalty by him on 2nd-and-29 kept Oakland's drive in overtime alive. Melvin Ingram extended his streak of games with a sack to four, and Jeremiah Attaochu had three tackles for loss.

Two of the best players in the secondary, Eric Weddle and Jason Verrett, were forced to leave with injuries, but Amari Cooper hindered by a foot injury on the Raiders side evened things out. Oakland had 204 yards through the air and one touchdown—a three-yard lob pass to Crabtree with rookie Craig Mager covering him. Jahleel Addae had a sack and pressured Carr into committing intentional grounding, backing up the Raiders as they were trying to get in field-goal range before the end of regulation.

Josh Lambo is getting away from being automatic, as he has missed a field goal in three straight games, including a 48-yard miss on Thursday. In the first nine games of the season, he was 17-of-19.

McCoy challenged what he thought was a bad spot in the second quarter but lost, and he picked up an unsportsmanlike conduct penalty in a critical part of the game. We tend to like aggressive coaches but not if their actions hurt the team.

Eric Weddle has said he'll become a free agent after this season, so when the All-Pro Safety came out in the first half with a groin injury, it's possible he may have played his last game with the Chargers.

The 30-year-old suffered a groin injury on Oct. 18 against the Green Bay Packers and was forced to sit out the next two games. If this groin injury is like that one, Weddle won't be ready for the regular-season finale next Sunday against the Denver Broncos.

And in the event Weddle does not play, the Chargers have limited options to replace him in the secondary. Addae, Darrell Stuckey and Adrian Phillips are the only remaining safeties on the active roster—and Addae is already starting.

Ladarius Green's catch in the end zone was initially ruled a touchdown, but after further review, officials determined that the player did not have possession of the ball on the way down and waved off the touchdown.

Here's what Philip Rivers had to say to reporters about the call made by the officials, per Chargers.com:

I mean, he caught the ball. Under the rule, it probably was correctly overturned. But I mean, I think we all know he caught the football...I think they got it right under the current rules.

But I don't think that anybody would argue if they just took a random poll that said: did he catch it or not? I mean, he caught the football.

Taking a look at it from my angle, it looked like the nose of the ball touched the ground while in Green's hands, and anytime you have the ball making contact with the ground, that usually means a no-catch to the refs. Establishing what is and isn't a catch these days is starting to become rocket science.

With the number of injuries that occurred in the secondary, San Diego needed an extra body to make up for the losses, and Dontrelle Inman volunteered to play some defensive back in addition to his already large role on offense.

Inman told reporters, per Chargers.com: "The last time I played defense was high school in a game…. (Tonight) they said, ‘We need somebody.’ And I said, ‘I’m ready to go. Just let me know what you need me to do."

The Chargers could have never expected they'd lose Weddle, Verrett, Stuckey and Patrick Robinson all on the same night, which is why they didn't make a lot defensive backs active for this game. And it's not like defensive coordinator John Pagano left Inman out there an island.

Plus, it helps that Inman has some experience on defense at some level. Sometimes you gotta do what you gotta do.

Denzel Perryman built himself up as a big-hitter in college, and that's essentially why the Chargers drafted him in the second round this year, because he was so physical.

But when the rookie linebacker popped Crabtree after a short catch, the officials saw a little too much for their liking and deemed the hit a penalty, setting up Oakland with an automatic first down after facing 2nd-and-29.

"I think it was a clean hit, and that's all I'm going to say about it," Perryman told reporters (video courtesy of Marty Caswell of The Mighty 1090 AM). "I was very surprised. Like I said, it was a clean hit in my eyes."

That sort of bang-bang play is tough to judge on the spot. Because of how brutal the hit looked in the moment, I can see how an official might view that as helmet-to-helmet with the way Crabtree's head whipped back, but it's a tough call.

You'll get some people who see that as a great hit and others will see it differently.

Coming into Thursday's game, the Chargers were already without left tackle King Dunlap, who sat out with an ankle injury.

So you can imagine their concern when replacement left tackle Chris Hairston had to leave the game with an abdomen injury, and left guard Orlando Franklin had to come out with a concussion. Then, they received more bad news when it was revealed that center Trevor Robinson had also suffered concussion during the game, per Michael Gehlken of the San Diego Union-Tribune.

It's been that kind of year for the offensive line with injuries. Every starting member has missed a game or two except for right tackle Joe Barksdale, but even he has had to come off the field temporarily with some kind of pain issue.