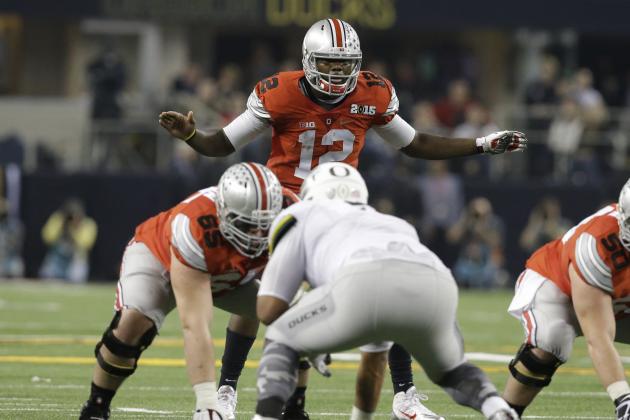 The debates surrounding which teams should be considered the top 25 in college football unofficially commenced with the release of the Amway Coaches Poll on July 30, but the gridiron discourse is set to ramp up again when the Associated Press releases its own rankings on Sunday, August 23.

According to a press release, the Associated Press will roll out its preseason ranking at 2 p.m. ET on CollegeFootball.AP.org.

The Associated Press and Amway Coaches Poll are more symbolic and ceremonial than anything with the advent of the College Football Playoff and its human selection committee, but for better or for worse, the polls will frame much of the discussion in college football week in and week out. Plus, they will serve as a point of reference until the CFP releases its first rankings on November 3, per CollegeFootballPlayoff.com.

For a guide to where you might see your favorite powerhouse team in the Associated Press rankings, here is the Coaches Poll preseason rundown.

The AP poll isn't exactly a well-guarded, sportswriter trade secret before its release. Gary Horowitz of the Statesman Journal provided a sneak peek as to how he voted on August 17:

Defending national champion Ohio State tops my top 25, followed by TCU, Alabama, Oregon and Michigan State. The Buckeyes are so loaded at quarterback that two-time Big Ten offensive player of the year Braxton Miller has moved to slot receiver.

If all goes according to form, TCU will have an opportunity to make amends for last season's College Football Playoff snub by playing Ohio State in the national championship game.

That's pretty well in line with the Coaches Poll, with Oregon and Michigan State bumped up a spot at Baylor's expense.

Jon Wilner of the San Jose Mercury News has Ohio State at No. 1 and, surprisingly, Notre Dame at No. 2 (Wilner's complete top 25 is in his column). He expects those two to be in the national championship game, with the Fighting Irish getting there in a true grind-it-out fashion:

I'm projecting Notre Dame to play Ohio State for the national title and have the Irish in the No. 2 slot. Their defense should be dominant (maybe better than '12). The schedule is challenging but manageable. If Malik Zaire is merely average, there's no reason they can't win every game 17-10.

Ohio State makes sense here, seeing as they're coming off a national championship, one that was thankfully decided in a rousing playoff format thanks to the CFP. Head coach Urban Meyer has the enviable dilemma of picking either Cardale Jones or J.T. Barrett to start the season under center. His choice could've been between three superstar QBs, but Braxton Miller has moved to the wide receiver corps.

Barrett broke scoring records in his redshirt freshman season with 45 total touchdowns (34 passing, 11 rushing), but a late-season ankle injury paved the way for Jones to acquire instant folk-hero status, as he led the Buckeyes to wins over Wisconsin, Alabama and finally Oregon on the way to the national championship.

Don't expect them to split snaps, though.

Which team is your gut-feeling, way-too-early pick to win the College Football Playoff for the 2015 season?

Which team is your gut-feeling, way-too-early pick to win the College Football Playoff for the 2015 season?

"I don't think it would be as efficient," Barrett said of a two-QB system, via ESPN.com's Austin Ward. "I did that in high school and switched every series...and that's kind of tough to do being that you can't get into a rhythm, get a real vibe off the defense."

Both the Associated Press and Coaches Polls will see a ton of churn and turnover as the season progresses. Injuries, upsets, fluke plays and meltdowns can (and, in many cases, will) derail a team's run to College Football Playoff glory. Also, nobody has yet seen the 2015 version of these programs playing full speed, 100 percent against real competition from another university.

It may be a fool's errand to pick a top 25 right now—and can probably lead to some primacy effect biases when top-ranked teams maybe don't plummet down the rankings as far as they should because people remember them as a preseason list-topper—but the trash-talking and debate has to start somewhere.