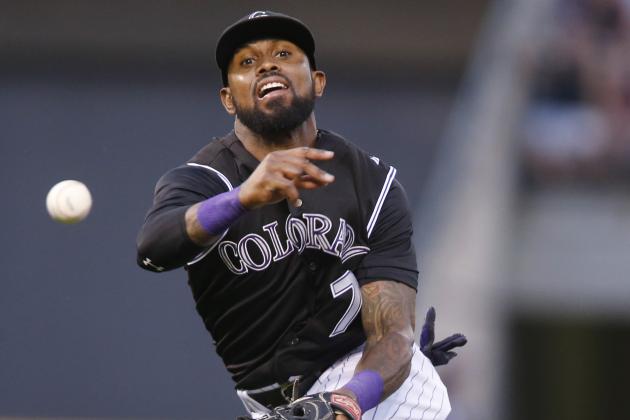 With less than two weeks to go before baseball's trade season officially comes to an end, contenders are beginning to scramble to add whatever reinforcements they can before making their final playoff pushes.

That hasn't necessarily been reflected in the rumor mill, which has maintained its speed over the past week, but we can be sure that general managers are feverishly working the phones. Some are trying to work out deals for players they've claimed on waivers, while others are focused on players who have already passed through waivers unclaimed.

Veteran infielders, outfielders and bullpen arms are on this week's list of potential trade candidates, which includes some current (and former) All-Stars.

Keep in mind that these proposed deals are only ideas and pure speculation. Unless otherwise noted, there's no indication that any of them have actually been discussed.

Los Angeles Gets: 2B Chase Utley and $5 million

While the Angels thought they were close to acquiring Philadelphia's Chase Utley last Friday, according to MLB.com's Alden Gonzalez, they aren't about to give up their pursuit of the 36-year-old second baseman.

A deal involving Utley is shaping up to be more complicated than your typical swap for a number of reasons that extend beyond Utley's ability to block trades as a 10-and-5 player:

All three are issues the Angels are in a position to deal with. They can hand Utley the second base job for the rest of the season, using him as the designated hitter on occasion to limit the wear-and-tear he puts on his body.

The more cash Philadelphia kicks in, the better the prospect they'll get in return, so that's an obstacle that's easily avoidable. The case of Utley's 2016 option is tricky, as he's unlikely to pick up the 233 plate appearances he needs for it to vest, making it a team option.

The problem is that nobody's quite sure what it's going to be worth. Per Cot's Contracts, that team option is worth between $5 million and $11 million based on time spent on the disabled list. Utley spent more than a month on the DL earlier this season with an ankle injury.

With Alex Yarbrough not showing much offensively at Triple-A (.243 BA, .615 OPS), the Angels could guarantee that 2016 option if it falls on the lower side of that scale. Even if they don't guarantee it, Utley would seemingly have a chance to stick with the club through at least next season at the keystone.

Philadelphia would get an intriguing 22-year-old righty in Jake Jewell. While his future role remains unclear—he began the season in the bullpen but has since shifted into the rotation for Single-A Burlington—Jewell has a terrific fastball that sits in the mid-90s and has shown plus secondary stuff at times.

With Philadelphia rebuilding, the chance to add a versatile arm like Jewell's—one that could be ready to contribute in one way or another in the next few years—is a suitable return for what could ultimately be just one month of Utley's services.

Why? Because as anyone whose been paying attention knows, the Dodgers are in desperate need of competent relief pitching. Dodgers relievers have pitched to a combined 5.87 ERA since the All-Star break, the highest ERA of any bullpen.

Maybe a change of scenery is what Breslow needs to get back on track, or maybe he's got nothing left to offer. It's a flier worth taking for the Dodgers, though.

De Aza, 31, has put up quality numbers since joining Boston in early June, hitting .313/.362/.520 with 18 extra-base hits (four home runs) and 25 RBI over 54 games. Capable of playing all three outfield positions, he'd allow the Dodgers to use Kike Hernandez primarily at second base in Howie Kendrick's absence, as Rosenthal noted.

As both are free agents after the season, Boston isn't going to get a blue-chip prospect for either one. In 22-year-old righty Scott Barlow, the Red Sox would get a pitcher that could develop into a back-end starter or a quality middle reliever. At the very least, he'd provide organizational depth.

Colorado Gets: RHP Robert Gsellman and OF Ivan Wilson

The New York Mets may or may not be one of the teams that CBS Sports' Jon Heyman said was "poking around" on Colorado's Jose Reyes, and the deal that ESPN's Jim Bowden recently proposed is all speculation—though the $36 million in this deal was his idea.

But chatter and thoughts of Reyes returning to the team he began his career with have been floating around since he was traded from Toronto to Colorado in the Troy Tulowitzki deal, and it seems inevitable that Reyes will one day make his way back to Queens.

Reyes may not be much better than Wilmer Flores or Ruben Tejada at this point in his career, but he'd still represent an upgrade at the position for the Mets. And who knows, maybe a return to New York in the midst of a playoff push could reenergize Reyes and light a spark under the team's offense.

With Colorado picking up all but $12 million of the $48 million remaining on Reyes' deal, which runs through 2017, he'd essentially cost the Mets $6 million in each of the next two seasons. That's a reasonable gamble to take, especially if he gets on a roll.

Heading back to the Rockies are a ground-ball specialist (per Minor League Central) in 22-year-old righty starter Robert Gsellman, who has pitched to a 2.45 ERA and 1.08 WHIP across two minor league levels this season and could be ready to contribute in the majors as early as 2016.

Colorado would also get an incredibly raw 20-year-old outfielder in Ivan Wilson, a long-term project who is still years away from potentially making an impact.

Milwaukee Gets: OF Jake Cave and RHP Cale Coshow

While Francisco Rodriguez is no Craig Kimbrel, the 33-year-old reliever would give the New York Yankees a chance to replicate the three-headed monster that Kansas City employs in its bullpen. It seems the Yankees already tried to accomplish this at the trade deadline, based on their failed pursuit of San Diego's closer.

With little in the way of quality rotation reinforcements currently available, bolstering the bullpen is the best way for the Yankees to go. And Rodriguez, who has converted all 29 of his save opportunities while pitching to a minuscule 1.90 ERA and 0.82 WHIP, is arguably the best reliever available.

Due $5.5 million in 2016 and with a $6 million team option for 2017 (both very reasonable salaries), K-Rod is more than a short-term rental and will require a pair of prospects to pry loose from Milwaukee, a rebuilding club that doesn't necessarily need an experienced closer.

The big piece heading back to the Brewers is 22-year-old outfielder Jake Cave, a gritty, hard-nosed player with average tools across the board that has the speed to stick in center field but could ultimately slide over to left field.

Milwaukee would also land 23-year-old reliever Cale Coshow, a hard-throwing righty with terrific control and a penchant for inducing ground balls (per Minor League Central), which is always a plus in the hitter-friendly confines of Miller Park.

Atlanta Gets: A player to be named later

The 2015 season would come full circle for David Aardsma, who has cleared revocable waivers (per Joel Sherman of the New York Post) and began the year with Los Angeles before opting out of his contract in early June and ultimately winding up in Atlanta.

While he's struggled with his control, issuing 14 walks in just 27.1 innings of work, he's also struck out 31 batters and pitched to a respectable 3.95 ERA, which admittedly is still a bit higher than you'd like to see from a relief pitcher.

As we've previously noted, the Dodgers bullpen is a mess, and Aardsma could easily be an inexpensive upgrade for the club down the stretch, both financially and in terms of what they'd have to give up to reacquire him.

Unless otherwise noted, all statistics courtesy of Baseball-Reference.com and FanGraphs and are current through games of August 18. All contract information courtesy of Cot's Contracts (via Baseball Prospectus).

Hit me up on Twitter to talk all things baseball: @RickWeinerBR