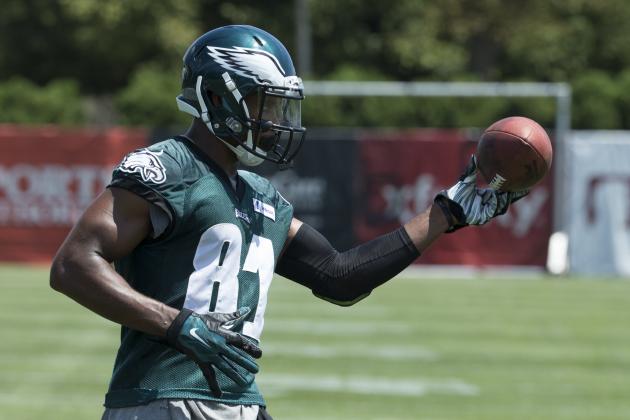 Training camp is underway, and the stars of tomorrow are working to earn an increased role with their respective teams. We may not know who will break out in the regular season yet, but the early stages of training camp have been productive for numerous players. These rising stars have given themselves the opportunity to earn major roles with their team in the coming season.

There are six players who have continuously been named as emerging stars in training camp thus far. A few are more proven than their counterparts, but the signs of development from incumbent starters is still great news for their teams. They could prove to be the key to making the playoffs or not.

Whether it's a veteran or young player, training camp is a good place to begin a strong 2015 campaign. Let’s take a look at six players who are emerging as stars to this point.

After putting up solid numbers as a rookie, Philadelphia Eagles receiver Jordan Matthews, 23, is looking to take his game to the next level. The big slot receiver is a difficult matchup within the Eagles offense, as he’s often outrunning linebackers or using his size to box out safeties. If his consistency finishing at the catch point continues to improve, the Eagles may have themselves a budding star.

Through training camp so far, the early sentiment is that Matthews is showing dominance with regularity. That’s huge, as the Eagles must replace Jeremy Maclin’s production. Jimmy Kempski of PhillyVoice.com sees star potential in Matthews:

Jordan Matthews destroyed today. He had catch after catch after catch, working against an assortment of Brandon Boykin replacements in the slot. Is he just dominating because he was going up against inexperienced competition, or because he's just really good? Probably a mix of the two, but he was the best player on the field today. I'm of the opinion Matthews is going to have a big season. He's underrated both nationally and locally. Hope I'm not overdoing it here, but Matthews has star potential.

Whether it's due to the competition or Matthews’ immense physical gifts, his receiving talent is only improving at this point. As training camp progresses, watch to see if Matthews can continue tearing through a talented Eagles secondary. The rest of the NFC East might have to prepare for another highly talented receiver.

The Carolina Panthers are hoping their 2015 second-round pick, Devin Funchess, will have as successful a rookie season as their 2014 first-round pick did. By pairing Funchess with Kelvin Benjamin, the Panthers have two of the tallest starting receivers in the NFL. That’s good news for quarterback Cam Newton.

Not only is Funchess big, but he’s smooth and fast as well. According to Scott Fowler of the Charlotte Observer, Panthers head coach Ron Rivera felt Funchess was a steal in the draft.

“He was a guy we had rated in the first round,” coach Rivera said. “He was a guy that’s going to bring something different to the table in terms of big catch radius, big size, a little bit more speed.”

Funchess has all but cemented his starting job within the first two weeks of training camp. Expect Newton, who still aims high when passing, to enjoy his large receiving targets. Funchess could be in store for an excellent rookie campaign.

The New York Giants continue to lose offensive linemen to injury as training camp continues, but what is happening in the backfield is positive news. Running back Rashad Jennings has been a standout player thus far. Even at 30 years old, Jennings hasn’t seen the same amount of use as many other older backs, so his ability to stay effective at his age isn’t shocking.

Jennings has been a spark plug-type player throughout his career. Now that he is back at 100 percent health, he’s ready to carry the load. Per Jordan Raanan of NJ Advance Media, he’s been looking explosive.

Jennings, fully recovered from last year's knee and ankle woes, is turning heads early in camp. Remember, this is a versatile player who Ben McAdoo gave 19.2 carries per game to in the first eight weeks of last season.

The big question mark for Jennings is health, if you couldn’t guess by now. He has the opportunity of a lifetime to have a breakout season in 2015. So far, he’s taking advantage.

When the Indianapolis Colts selected Phillip Dorsett in the first round of the 2015 draft, the first thought that came to mind was that T.Y. Hilton’s future was likely coming to an end. Yet that’s probably not the case. Instead, Dorsett figures to complement Hilton as the Colts look to build the best offense in the NFL.

Dorsett’s skill set really sells itself. He’s extremely fast, has good hands and is an underrated route-runner. His draft process boosted his stock by at least two rounds, because he showed much more talent than what his role in college showed. Now he is rewarding the Colts.

According to NFL Media Insider Ian Rapoport, from Chris Wesseling of NFL.com, the Colts feel Dorsett will be a star.

"They could not be higher on Phillip Dorsett," added Rapoport, who was onsite in Anderson, Indiana, on Tuesday. "I think they think they added a superstar."

When Rapoport asked a Colts coach if he was surprised they didn't address a porous defense with their top draft pick, the response was, "Well, no. This guy's that good."

We will see if Dorsett was worth grabbing over more important needs. So far, it does seem promising that he will have an active role early in his career.

The bad news for the Cleveland Browns is that 2014 first-round pick Justin Gilbert continues to struggle. The positive news is fourth-round cornerback Pierre Desir is playing up to the level that was expected of Gilbert. Desir was better as a rookie, and his training camp has been strong as well.

According to Tom Reed of Northeast Ohio Media Group, Desir is thriving.

"He's doing what he's supposed to do," safety Donte Whitner said, per Reed. "He was here every day in the offseason working as hard as he possibly can."

The 2014 fourth-round draft pick embodies the play-no-favorites philosophy coach Mike Pettine and his staff introduced a year ago.

Desir has elite size and great instincts for the cornerback position. His transition from Lindenwood University to the NFL understandably took some time, but he is coming into his own already. The Browns may have missed on Gilbert, but if Desir continues to play well, he’ll make the Gilbert pick sting less.

The most unknown player on this list is, by far, Solomon Patton of the Denver Broncos. The former Tampa Bay receiver was a nondescript pickup this summer, but now he’s turning heads and drawing praise. Denver has a need for receiver depth and a return man.

If his early training camp play continues, Patton seems fairly likely to make the final 53-man roster. According to Nicki Jhabvala of the Denver Post, Patton has been the story of the Broncos’ camp.

Solomon Patton, a waiver claim for the Broncos, has made the most of his snaps during camp. The second-year receiver drew the biggest applause Monday with a deep, back-shoulder catch just inside the right sideline.

Patton, a candidate for punt and kickoff returns as well, has hauled in a number of big catches during team drills, raising his value to the team.

Patton wasn’t super productive on a very bad Buccaneers team last year, but the Broncos can provide him with much more support and a clear role. Considering Denver’s needs and Patton’s playmaking, don’t be shocked if he continues to make the most of his opportunity.

All stats used are from sports-reference.com.