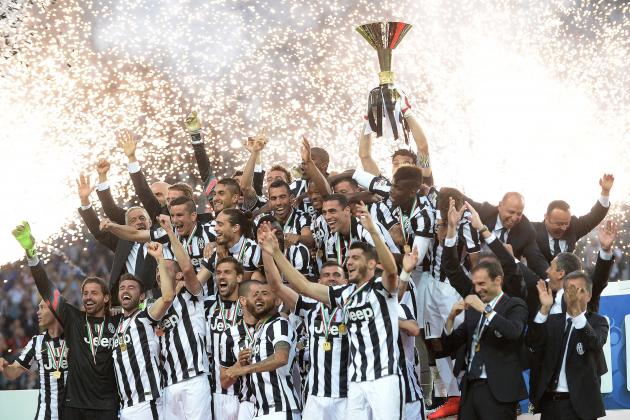 Juventus' 3-1 home win over Napoli did their rivals Roma a favour by statistically guaranteeing the Giallorossi UEFA Champions League football in 2015-16 before their hotly anticipated derby game with Lazio.

Roma were able to do it themselves, however, and Rudi Garcia's Lupi won the Derby della Capitale 2-1 to cement second place in Serie A at the expense of their high-flying city rivals.

Elsewhere in Week 37, Milan looked impressive against a disappointing Torino, winning 3-0 at the San Siro. Inter were less impressive, losing 3-2 away to Genoa. Fiorentina travelled to Palermo, where they won 3-2, while Sassuolo beat Udinese 1-0 at the Stadio Friuli.

What follows is our Serie A Team of the Week for Week 37.

The 37-year-old goalkeeper made a slew of impressive stops and denied Lorenzo Insigne from the penalty spot. Juve's captain was easily the best player on the pitch in Turin and was deservedly voted man of the match, per WhoScored.com.

Mapou Yanga-Mbiwa saved the day for Roma in the Derby della Capitale.

Lazio made it 1-1 at the Stadio Olimpico with just nine minutes to play thanks to some impressive interplay from Miroslav Klose and Filip Djordjevic, and it looked like both sides would have to settle for a draw.

The Giallorossi maintained their belief and pressed on—something they've often failed to do this season—and were rewarded by a well-placed header from Yanga-Mbiwa in the 84th minute that won them the game, secured second spot in the Serie A table and Champions League qualification.

Goals don't come much more important than this one.

Yanga-Mbiwa has been impressive all season, and this goal will make him a hero in the Italian capital. For a 26-year-old of his quality and experience, it seems incredible that Roma paid just £5.5 million for his services.

Yohan Benalouane was impressive for Atalanta against Chievo Verona, even if the Bergamasca did concede late on to Sergio Pellissier.

The 28-year-old Frenchman was strong in the air and made a number of timely tackles to protect his goal, but unfortunately the rest of his colleagues in defence didn't play to the same standard.

Daniele Rugani is exciting a lot of football fans in Italy, and it's easy to see why. He was one of Empoli's best players—not for the first time this season—against Sampdoria and was only denied a clean sheet by an injury-time goal from Samuel Eto’o.

The 20-year-old from Lucca was bought outright by Juventus earlier in the season and looks to have an extremely bright future ahead of him.

Much like Sampdoria's Alessio Romagnoli, who is on loan in Genoa from Roma, Rugani looks far more accomplished and developed than his age would suggest. While there might not yet be space for him in the Bianconeri defence, it won't be long before we see him play at the highest level.

Marco van Ginkel's loan spell at AC Milan hasn't always been easy, but in recent weeks the Dutch midfielder has shown plenty of promise. It's not surprising that the Rossoneri want to keep hold of the Chelsea man for another season.

Unfortunately he is not our player, but he has grown a lot. He has played seven or eight games in a row and we are starting to see a great player. He does really well in training.

Chelsea have great midfielders and he is in need of playing. My will would be if possible to keep him because he can give us a big hand.

The 22-year-old has certainly improved of late, and against Torino, he looked very impressive. His attacking ability and passing played a huge part in the 3-0 win, and he deserves plenty of credit for the way in which he was able to dictate play even when his side went down to 10 men.

Francesco Magnanelli has been with Sassuolo for a decade, and while he's not their flashiest player, he is a stalwart of Eusebio Di Francesco's side.

The 30-year-old is consistent and dependable in midfield, but he rarely scores. In total, he's found the back of the net just five times since 2005 for the Neroverdi. One of those rare strikes came at the weekend against Udinese, and it's thanks to Magnanelli that his side left the Stadio Friuli with all three points.

Stefano Sturaro isn't a household name yet, but if the 22-year-old keeps up his current development, it won't be long until he is.

Sturaro played an important role in Juventus' Champions League success against Real Madrid, and at the weekend, he was again given a chance by Massimiliano Allegri to prove his worth. He took full advantage and bagged his first goal for the Bianconeri, capping off a solid all-round performance on the right of midfield.

Is Stephan El Shaarawy back? The young Italian was in sparkling form against Torino, scoring twice and looking like a completely different player than the one we've seen labouring on the sidelines for the past 18 months.

After a showing like this, it's unfortunate for the 22-year-old that the Rossoneri have only one game left in the season, and Milanisti everywhere will be hoping that Il Faraone can start the next campaign with this kind of potency.

For more on El Shaarawy, check out this article from Bleacher Report's Anthony Lopopolo.

Josip Ilicic has become something of a regular in the TOTW, and the Slovenian continued his fine form in Fiorentina's narrow 3-2 win over Palermo.

The 27-year-old was initially booed by the fans at his former club, but by the end of the game, he managed to earn their respect and applause with a commanding, influential performance as the trequartista for Vincenzo Montella's Viola.

He scored an impressive opening goal and was provided the foundation in attack by Alberto Gilardino to build upon.

Maxime Lestienne and Leonardo Pavoletti were both excellent for Genoa against Inter, and the ease with which they got the better of the Nerazzurri defence should worry Roberto Mancini.

This was the best performance we've seen from the young Belgian—who is on loan with the Grifone from Al-Arabi SC in Qatar—and his goal proved a crucial inspiration for his side against the Milan giants.

He hasn't set Serie A alight this season, but games like this show why so many people expect big things from the Club Brugge product.

Luca Toni fully deserves to win the Capocannoniere this season. That's an incredible statement to make about a 38-year-old striker who looked finished five years ago, but it's true.

The evergreen striker was in fine form again at the weekend, bagging a brace to steal a draw against Parma and deny the Stadio Ennio Tardini one last win in Serie A before Crociati descend to the second division.

Those two goals make it 21 for the season, and you wouldn't bet against him adding to that tally in the final game against Juventus next weekend.

We'd like to send you the most entertaining Serie A articles, videos, and podcasts from around the web.