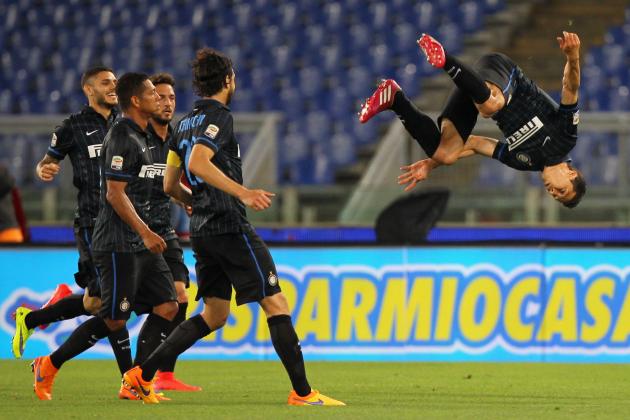 Both Milan and Inter might be well off the pace set by Roma and Lazio in the league, but both came out on top at the weekend with the Rossoneri winning 2-1 at the San Siro while the Nerazzurri bagged a 1-2 away win in the Italian capital.

A heavily rotated Juventus were held to a 1-1 draw in Turin by struggling Cagliari, but even though the point will feel like a win for the Sardinians it looks like it's too late for them to avoid relegation. Atalanta's 2-3 victory in Palermo means that they have an eight-point advantage with just three games to go.

Elsewhere, both Genoan sides romped to victory, with Sampdoria beating Udinese 1-4 away and Genoa crushing Torino 5-1 at the Stadio Luigi Ferraris. Napoli were held to a 2-2 draw at Parma.

The unedifying scenes that marred Parma's 2-2 draw with Napoli (more on that here on Goal.com) shouldn't take away from what was a spirited performance from the Ducali.

Roberto Donadoni's side are relegated and face an uncertain future, but against the Partenopei they showed that they're still capable of playing with pride and holding their own against top-level opposition.

Goalkeeper Antonio Mirante was deservedly Whoscored.com's man of the match, making a string of impressive saves to frustrate Napoli and keep his side in the tie.

The visitors had the lion's share of possession and managed 12 shots on target to Parma's five, but thanks to Mirante's fine work between the posts Rafa Benitez's men left the Stadio Ennio Tardini with just a point, damaging their Champions League hopes despite the fact that both Roma and Lazio lost at the weekend.

Sampdoria's Pawel Wszolek has been a bit-part player this season, but you wouldn't know it after seeing him in action in this 1-4 win over Udinese.

The 23-year-old Poland international is a midfielder, but put in a fine display at full-back. He set up Roberto Soriano's goal to open the scoring and was a constant threat out wide in the final third, but he also showed a keen defensive ability when called upon.

Wszolek and Afriyie Acquah formed an impressive partnership on the right flank, completing more passes than any other pair on the pitch (according to fourfourtwo.com) and overlapping brilliantly. Sinisa Mihajlovic should be very pleased.

Cagliari have only lost one of the last four rounds, winning two and drawing one, but it still looks like too little, too late from Cagliari. That said, their draw with Juventus in Turin should still give them some satisfaction.

Luca Rossettini was excellent at the back for the Rossoblu against the Bianconeri, frustrating Juve's second-string forward line on several occasions before going on to score a late goal and grab a point for Gianluca Festa's embattled side.

The 30-year-old from Padua has only scored four goals in Serie A, but half of them have come against Juventus.

Atalanta's Giuseppe Biava rolled back the years against Palermo, making not one, but two off-the-line clearances to keep his side in the game.

The 38-year-old also scored against his old side Lazio in the previous round, and looks to be finding some vintage form at a crucial time for the Bergamaschi.

They now enjoy an eight-point lead over Cagliari in 17th with just three games to go, but with tricky games against Genoa, Chievo Verona and Milan to come they can't afford to be complacent.

Much like Mirante, Massimo Gobbi put in a proud display for Parma that should give their fans some hope of returning to Serie A very soon.

The 34-year-old from Milan set up the second goal for Cristobal Jorquera and in general was busy up and down the left flank.

Genoa's Andrea Bertolacci was on fire against Torino, controlling in the midfield perfectly and driving the best of the Grifone's attacking play.

The young Roman was central to this 5-1 victory over Torino and would have deserved his place in this week's TOTW even without his shooting efforts.

As the icing on the cake for a perfect performance pulling the strings in the centre, Bertolacci forced a great save from Daniele Padelli before driving home into the far corner late on to get his name on the scoresheet.

Alfred Duncan was in sparkling form against Udinese this round, inspiring Sampdoria's win at the Stadio Friuli with a goal and an assist.

The 22-year-old from Ghana was denied by the woodwork early in the second half but then went on to set up Afriyie Acquah before grabbing Samp's fourth in the game's dying minutes.

Manager Sinisa Mihajlovic should also be happy with the Inter loanee's defensive contribution and his general work ethic in midfield.

Hernanes masterminded an important win for Inter at the Stadio Olimpico this weekend, overcoming the pressure of facing his old club and the boos of Lazio supporters to score two brilliant goals.

The home crowd did its best to distract the Brazilian, but it only served to inspire him and from start to finish he was the spark for Inter's most positive play and the attacking fulcrum upon which the Nerazzurri pivoted.

Fiorentina's Josip Ilicic has picked the right time to peak. After inspiring the win over Cesena in the previous round, the Slovenian took Empoli apart in this Tuscan derby and was involved in everything positive that the Viola mustered.

The 27-year-old scored twice and assisted Mohamed Salah for Fiorentina's second. That makes it four goals in his last two league games for Ilicic, ending a confusingly barren run of 19 matches without a strike.

Domenico Berardi's future is still uncertain, but performances like this one must make bringing him back to Turin a tempting option for Juventus. Berardi supplied two brilliant assists against Cesena to cap off an inspirational showing.

The young Italian is currently on loan at Sassuolo, but though he's made a name for himself with the Neroverdi it's hard to see him spending another season with Serie A's smallest club.

Atalanta have all but secured a place in Serie A next season thanks to a 2-3 win away to Palermo. At the heart of that win was Alejandro Gomez, who was a constant threat up front before netting the visitors' third goal and sealing the tie.

Prior to that, the No. 10 had also supplied the corner which Palermo's Sinisa Andjelkovic would head in for an own goal.

We'd like to send you the most entertaining Serie A articles, videos, and podcasts from around the web.