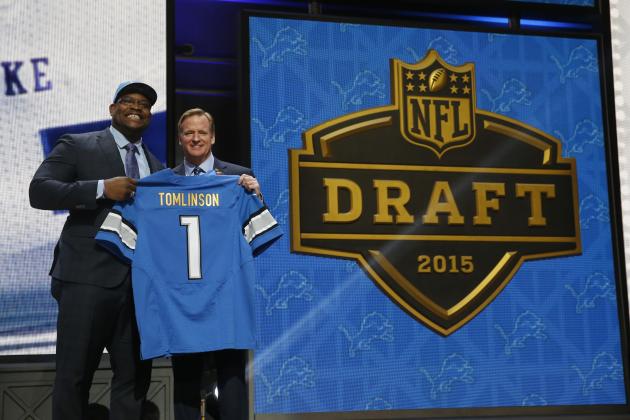 That's mostly what fans saw in the first round of the 2015 NFL draft—exactly what most of us expected to see. The only difference was for those (like myself) who expected to be wrong! We always expect to be wrong, because the draft does that to us every single year.

Yet, for whatever reason, NFL teams simply stood in line and took their best player available.

Maybe it's the quality of the class, that there were only a small handful of elite players and a deep class of better-than-mediocre talent. It became cost prohibitive to trade up to the very top of the draft and unnecessary later in the first.

Or, maybe, teams were just empowered by stories of Dallas Cowboys executive Stephen Jones wrestling his father, Cowboys owner Jerry Jones, away from the Johnny Manziel selection in 2014, resulting in a widespread revolt leading to an outbreak of logic against teams mortgaging their future.

OK, so it's more likely to have been the former.

What can we expect to see on Day 2?

A lot of very talented players are still on the board.

In fact, in a draft with only 15-20 actual "first-round prospects" (not even enough to fill the first round itself), a handful of actual elite talent is still out there, as teams weigh the risk/reward of bringing in players with various off-field concerns.

In Round 1, the Tampa Bay Buccaneers spent months dedicated just to investigating Florida State quarterback Jameis Winston and were comfortable making him the first-overall pick, and the Denver Broncos were willing to roll the dice on Missouri pass-rusher Shane Ray. Other than that, teams largely played it safe from a character perspective.

La'el Collins (OT LSU), Randy Gregory (OLB Nebraska) and Dorial Green-Beckham (WR Missouri/Oklahoma) are all among the top players of their respective positions. In fact, they're all vastly more talented than some of the players already off the draft board at each of their positions.

All three are likely to hear their name called on Day 2, but don't believe teams are chomping at the bit to do so.

The NFL has become weary with character issues over the past year, and it becomes difficult to invest long-term in a player who may add to that weariness.

Part of the "chalk" first round was watching running backs Todd Gurley and Melvin Gordon come off the board to the St. Louis Rams and San Diego Chargers, respectively. No, not everyone may have gotten the teams right, but both players went about where they were projected.

And while it was what many were expecting, that's still unusual in terms of recent history, as the running back position hasn't seen a lot of play in the first round in recent years.

Get ready for some more.

This is a stacked running back class, and while there may not be a legit trade-up target at the top of the second round, there should be a run on different running backs as teams jockey to get their guy (or, at least, the guy who fits their mold).

NFL teams have problems at quarterback—which can mean any number of (true) things.

Yes, teams out there have serious talent deficiencies at the position and desperately want to fix that in this draft class. Also, there are problems with the class itself and its utter lack of development-caliber talent. Overall, maybe the biggest problem is that NFL teams don't have the time or wherewithal to actually develop quarterbacks over time anymore.

Ninety-nine problems and Bryce Petty ain't one, yet.

If I got to control the puppet strings of every single organization, there'd only be one (maybe two) quarterbacks off the board on Day 2. My next rated quarterback is Brett Hundley (UCLA) and then Bryce Petty (Baylor). Both have good athleticism, but they make troubling mistakes and haven't improved the way many had hoped over the past year. While many rank Petty higher, I see similar cons to both players and prefer the guy with the rocket arm who's worked with a decent-sized playbook.

Yet, the last problem the NFL has with quarterbacks is that they're addicted to them—and rightfully so.

Because it's the most important position on the field and because so many teams have big needs there, we could also see Garrett Grayson (Colorado State), Sean Mannion (Oregon State) and potentially others go off the board, rounds before their talent and ability might actually allow.

Maxx Williams (TE Minnesota) has existed on the periphery of the first-round discussion for most of the draft season. While just about everyone agrees he's not a first-round-caliber talent, he's also (easily) the top tight end in the class, which could've meant teams like the Green Bay Packers, Denver Broncos or New Orleans Saints taking a shot at him.

He's an athletic pass-catcher who can create mismatches with cornerbacks, linebackers and safeties—yeah, that's valuable.

Tom Pelissero of USA Today had some nice notes on him:

[His dad] Brian can admit Maxx turned out to be the superior athlete in the family. He ran the 40-yard dash in 4.78 seconds at the scouting combine and also was among the top performers for tight ends in the vertical jump (34 1/2 inches), broad jump (117 inches) and 20-yard shuttle (4.37 seconds).

At the top of the second round, there are two teams in the Tampa Bay Buccaneers and Tennessee Titans that could pair their new quarterback with a safety blanket like Williams. After that, just about every team could use Williams in their offense, whether they have a current quality tight end or not.

It didn't surprise me he wasn't drafted in the first, but it would surprise me if he didn't go awfully soon in the second.

OK, maybe just for me.

While teams repeat maxims like "we got the best player on our board," ad nauseum, we know better. Teams that have specific needs often target those needs, inflating their status on their boards or at least knocking the players they don't want or need off of it.

When a team makes an offensive pick in Round 1, many find logic in going to the defensive side of the ball in Rounds 2 or 3, yet that doesn't always make a lot of sense. The draft is not about filling the positions of greatest need as much as it's about collecting players the teams can use. Because of that, it might make more sense to double down on one side of the ball or another to give the team a greater identity on that side of the ball moving forward.

Look at the Tennessee Titans and Tampa Bay Buccaneers.

Both teams have been absolute messes and boring to watch offensively for some time. Now, they have rookie quarterbacks. Both teams (the Buccaneers more so) have some offensive pieces, but there's still plenty of work to be done.

In fact, add in the Oakland Raiders, Jacksonville Jaguars, New York Jets, Washington and St. Louis Rams—all of those teams have young quarterbacks with a dearth of talent around them.

Defense might win championships, but offense could win Day 2 of the 2015 NFL draft.

Maybe this is less of a prediction than a general sense of the way the wind is blowing.

Matt Zenitz of AL.com touched on these same feelings, listing teams all the way from 33 to 61 as potential landing spots.

At one point, Landon Collins (S Alabama) looked like a legitimate top-10 pick. He was considered, by many, to be the top safety in the class and an impact hitter from a pro-style defense. Yet, on Day 1, we saw only one safety come off the board and that was Damarious Randall (Arizona State).

Collins might be the best safety left on a bunch of teams' boards, but both his lack of elite ball skills and the stigma of past Nick Saban defensive backs not always living up to their potential could hurt him and keep teams from wanting to use a pick on what potentially could be an in-the-box safety who has reached his ceiling already.

The clincher here is whether teams look at cornerback prospects like P.J. Williams (Florida State) and Jalen Collins (CB) as safeties as well. If that's the case, Landon Collins could end up waiting even longer.

There could hardly be less, am I right?

Though the phone calls between teams on Thursday night may not have been as plentiful as just about every analyst suggested they would be, Day 2 is almost certain to have a little more drama and uncertainty. We're now in the meat of the draft, where the bulk of the talent deserves to be taken.

If there weren't enough first-round-caliber guys for Day 1, it's also true that there are more second-day-worthy guys than Day 2 could possibly hold.

We're also talking players of greater specialization. The difference between two closely ranked running backs, linemen or receivers may not just be a point or two on the grading scale, but also between a guy who fits the system and one who is off the board completely because he can't do what the team needs him to do. For that reason alone, there should be more trades in Rounds 2 and 3.

Finally, a bunch of teams have extra fourth- and fifth-round selections in this draft, and those can be shuffled to facilitate a few spots of movement in this draft class—as has always been the custom.

Michael Schottey is an award-winning NFL national lead writer for Bleacher Report and a writer for Football Insiders. Follow him on Twitter.