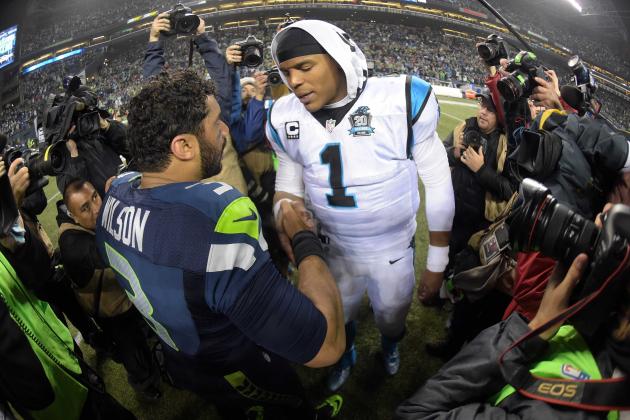 The Carolina Panthers saw their season end in disappointing fashion by losing 31-17 to the Seattle Seahawks on Saturday. The NFC West champs proved to be too much for the Panthers, who dropped a fifth consecutive loss to Seattle.

For what it was worth, this game was close for one half. The Seahawks led 14-10 going into halftime but broke the game open in the fourth quarter by outscoring Carolina 17-7.

For many, this was not the way the game was supposed to end. If the Panthers were to lose, then the game would be close. However, miscues late in the game allowed the vaunted Seattle defense to take control and put considerable distance between itself and its opponents.

Each unit was graded based on its performance, and the final grade reflects the outcome of the game itself. Without further ado, here are the final grades of the Carolina Panthers 2014 season.

The Legion of Boom had Newton's number on Saturday night.

It didn't help that some of his throws were off target and limited the Carolina offense from moving the ball as well as it had in recent weeks. This was especially evident on his deep throws. It was on such a passing play that he was intercepted. Newton will have to work on his accuracy, because he can look fantastic one minute and inept the next.

Had he not turned the ball over the way he did, the game might have turned out differently.

Jonathan Stewart led the way with 70 yards on 13 carries. It took a while for him to get anything started with the aggressive nature of the Seattle defense, but he did have a couple of quality runs. Unfortunately, he was unable to find the end zone and even fumbled the ball early in the game.

DeAngelo Williams and Fozzy Whittaker combined for 15 yards on three carries. Whittaker only carried the ball once for a gain of one yard. It's interesting that the third-string running back didn't get more carries or that Williams didn't see more action on the field.

Mike Tolbert was not especially effective Saturday night with 10 rushing yards on two carries, but he did have a reception that went 14 yards. He did have a drop that could have picked up a first down for the Panthers, so much like his season has been, his night was shrouded in disappointment.

It's not too surprising the running game couldn't really assert itself. After all, Seattle's defense was making it difficult for the offensive line to hold its blocks or open up any running lanes.

If not for Kelvin Benjamin, this unit might not have been a factor, and the game might have even been more of a blowout. The rookie capped off his first season with seven catches for 75 yards and two touchdowns. He dropped a possible third touchdown in the end zone, as that one aspect of his game continues to haunt him.

Greg Olsen had a quiet night, catching the ball four times for 58 yards. He really wasn't targeted in the first half, and perhaps not looking for him more often led to the Carolina offense stalling out. Olsen was a vital member of the offense this past season, but it was apparent that when he does not get many targets or receptions, the offense doesn't fare too well.

Philly Brown was able to return after injuring himself last week. He didn't do too much either, as he had two receptions for 24 yards. It didn't help matters that Richard Sherman was on him much of the evening. Brown wasn't utilized as much as he had been during Carolina's winning streak, and that was probably the result of not being 100 percent.

Jerricho Cotchery, Brenton Bersin and Ed Dickson all had at least one reception, but neither player could string together much production.

The unit didn't play terribly and could have had a few more good moments had penalties not negated those plays. Still, this is one area in which the Panthers could improve upon in the offseason.

The offensive line had its hands full on Saturday night. Seattle's defensive line gave the unit all it could handle, and as a result, it struggled in run blocking and pass protection. The tenacious way the Seahawks met the Panthers offensive line was a testament to their lofty ranking among the league's best. Despite the turnaround up front, the current group was not ready for what Seattle had to offer.

Byron Bell may have played his last game at left tackle...as a starter anyway. Mike Remmers played all right, but he made a costly mistake of committing a hands-to-the-face penalty that took away a first down and would later force the Panthers to punt.

Despite the aggressive nature of the Seattle defense, Carolina's offensive line only allowed two sacks. However, Cam Newton was pressured consistently and had a difficult time standing in the pocket with the kind of pressure the Seahawks were generating.

The Carolina defensive line did a great job of keeping Marshawn Lynch from entering Beast Mode, yielding just 59 yards to the star running back. While the line was able to keep the Seattle running game in check (allowed 100 yards rushing and no touchdowns), the unit struggled to get to pressure on Russell Wilson.

Mario Addison was the only lineman to sack Wilson Saturday night. Since the defensive line was only able to get to Wilson once, it showed just how good his protection was on the evening. Charles Johnson was rendered a non-factor, as he only accounted for two tackles.

Kawann Short would lead the line in tackles with four; Addison, Colin Jones and Kony Ealy each had three.

The unit tried its best to make things happen. The defensive line even forced a fumble from Lynch, only to see Wilson recover it. It was just that kind of night for the Carolina defensive front.

Thomas Davis led the charge with a team-leading 10 tackles and was able to get to Russell Wilson for a sack. Luke Kuechly finished with eight tackles, as the duo continued to play well in big games. However, their efforts weren't enough, and much like the defensive line, the linebackers struggled to get pressure on the quarterback.

It didn't help matters that the Seahawks were able to complete a few intermediate passes right in front of the linebackers to pick up big yards, but Wilson made it a habit to keep the ball away from any and all Carolina defenders (he had enough time to do so).

Adarius Glanton only had one tackle, and perhaps if the Panthers had had a healthy A.J. Klein, the unit's success would have been better. Glanton has been serviceable, but he was still a young player (24) in a big game.

Bene Benwikere would probably rather forget the game against the Seahawks. He was picked on relentlessly and even gave up a touchdown reception to Luke Willson. Earlier, Jermaine Kearse burned him for a score. Benwikere appeared to hurt himself trying to take down the big tight end, but he was able to return to the field.

Much like Benwikere, fellow rookie Tre Boston had his own misadventures in the secondary.

Doug Baldwin beat the young safety over the middle for a touchdown, and Boston was unable to contain the Seattle passing game. Russell Wilson averaged 12.2 yards per completion and finished the night with just 15 completions. His passes were few but efficient.

Roman Harper didn't help matters and even drew a penalty that allowed the Seahawks to gain some free yardage. In a game as big as this one, seeing an experienced veteran make such a costly mistake is inexcusable.

The Panthers may have their secondary of the future, albeit with a few upgrades along the way. However, this playoff game served as a reminder that the unit is young and flawed. The potential is there, but there is a lot of growing left to do.

How many times does one man have to attempt a field goal before it's punched through? Apparently three. Graham Gano saw his only field-goal try turn into an extended visit as his first kick was good but negated by a penalty. The second one missed, but the Seahawks were penalized for running into the kicker. Finally, on attempt No. 3, Gano punched it through the uprights for three points.

It should be noted that Seattle defensive back Kam Chancellor hurdled the line on the first two kicks, and it was shocking that he didn't block the first attempt. Even more shocking was the fact that Carolina allowed him to do it twice.

Brad Nortman would have preferred a better game. He averaged 39.3 yards on each punt and only booted one inside the 20-yard line. He usually helps win the battle of field position, but it wasn't to be against Seattle.

Ron Rivera did all he could to call his kind of game. Establishing the run early was a difficult task, and it never really set in. However, he did channel his gambling instincts on 4th-and-short to convert for the first down. If anything, he was coaching to win and believed in his guys. Unfortunately, they were outmatched by a more talented Seattle team.

Many people have been quick to blame the play-calling of Mike Shula in social media. In fairness, he called the same kind of game that had allowed the Panthers to reel off five straight wins prior to Saturday night.

The offensive line just wasn't ready for the aggressive nature of the Seattle defense, and it upset the timing of Cam Newton and prevented the running game from doing much either. As noted before, Newton hurt the team's chances by being inaccurate and throwing two interceptions. In the end, Shula can only call the plays; it's up to the players to execute them.

Sean McDermott would have preferred a different outcome, even in defeat. His defense prides itself on shutting down opposing offenses and keeping the score close. That happened for three quarters until the Seahawks hung 17 on the Panthers in the fourth quarter. An exception can be made that one of those touchdowns was a pick-six, but in the end, Carolina was outplayed at the wrong time.

Wide Receivers and Tight Ends: B-

Several weeks ago, this Carolina team was described as not being playoff-ready. Maybe it was and maybe it was not. In the end, youth lost to experience, as the defending champs exposed Carolina's flaws and capitalized on miscues.

Make no mistake: This is a team on the rise. If Carolina had had a few more weapons on offense or a stronger offensive line, the game would have been closer. The Panthers accomplished a lot this past year despite the losing record. Ron Rivera knows he has a team with plenty of potential, but he will have to take the next step to harness it.