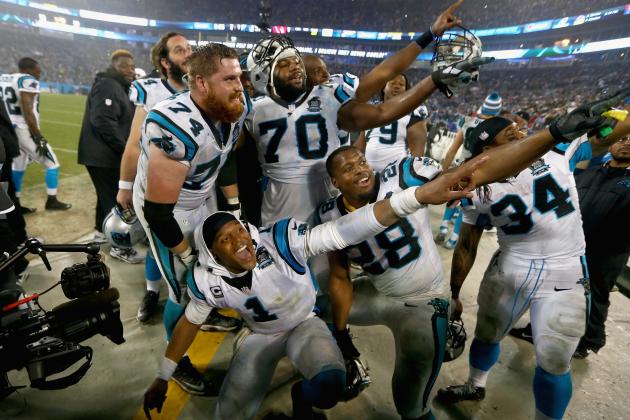 The Carolina Panthers will be playing next week in the divisional round of the NFC playoffs. By defeating the Arizona Cardinals 27-16, the Panthers secured their first postseason win since 2005 and gave both Cam Newton and Ron Rivera their first playoff wins. The game wasn't pretty by any means, but the final score was a pretty sight to the Carolina fans.

The win exorcised the demons of that horrific 2009 playoff game against Arizona and perhaps legitimized the Panthers as serious postseason contenders.

Carolina's defense played well in the second half, and special teams were integral in putting the Panthers up by two possessions in the third quarter. Players like Charles Johnson, Luke Kuechly and Tre Boston were the playmakers Saturday night.

The focus will shift to next week and who will be Carolina's next opponent. For now, let's review the game grades and see how each positional unit fared in the first round.

Cam Newton wasn't at his best on Saturday, but the stellar play of the defense made up for it. Let's start with the bad. Newton was picked off by Antonio Cromartie on a pass that was thrown behind Jerricho Cotchery. Newton was able to prevent the touchdown, but Arizona would capitalize on the turnover regardless.

He was 18-of-32 for 198 yards, and his accuracy did leave a bit to be desired. He missed the mark on four attempts to Ed Dickson. Dickson was open on many of those throws, and to miss a target like that speaks volumes. Of course, Dickson wasn't the only receiver he missed.

Newton had a fumble as well, but it was a moot point as Luke Kuechly would pick off Ryan Lindley on the next series.

Newton did some good things too.

He was responsible for two touchdowns, to Mike Tolbert and Fozzy Whittaker. Additionally, he rushed for 35 yards on seven carries.

His overall performance wasn't too bad considering the defense he was facing. However, had Arizona had a better option at quarterback, the ending of this game might have had a different tune to it. Newton needs to learn from this outing and build upon it.

Just give Jonathan Stewart the ball!

He rushed for 123 yards on 24 carries and established the Carolina running attack after some early struggles. He seemed to really come on in the second quarter and had 70 yards at halftime. The only questionable thing about Stewart's game was why he was on the field late in the fourth quarter.

DeAngelo Williams came on in the final quarter and did well in limited action. He gained 16 yards on four carries, although one of those carries was for 12 yards. Just having him back on the field was a pleasant sight. With any luck, he gets healthier.

Fozzy Whittaker spelled Stewart for much of the game and made the most of his playing time. While he ran the ball once, he will be best remembered for the touchdown he scored on a 39-yard screen pass. Sometimes, the little things generate big results.

Such was the case with Mike Tolbert.

The veteran fullback didn't do too much, but he did catch a touchdown pass on play action, as he was left wide open on the left side of the end zone.

This unit is healthy and at full strength at the right time.

It's difficult to fault the receivers when they don't get too many chances or are overthrown. The big three of Carolina's receiving corps (Kelvin Benjamin, Greg Olsen and Philly Brown) were targeted 18 times but accounted for 10 catches. One would think that number would be a bit higher, but luckily, the game turned out in the Panthers' favor.

Benjamin is still battling his issues with drops. He will seemingly make a spectacular grab and then follow it up with a drop. Benjamin ended with four catches for 33 yards.

Olsen wasn't targeted nearly as much as he probably should have been (Ed Dickson was favored nearly as much), but he did catch three of five passes tossed his way. He ended the night with 37 yards receiving, but for a primary playmaker in this offense, that is considerably low.

Brown had a nice grab that picked up 23 yards. However, he missed the entire second half due to a shoulder injury. Whether he'll be ready by next week is unknown.

It was mentioned earlier that Cotchery had a pass thrown behind him, and it was intercepted as a result. Whether Cotchery is partly to blame is irrelevant, but a receiver needs to be on the same page as his quarterback.

This unit is better than its performance against Arizona. It needs to step up next week.

The offensive line appeared to regress early in the game, but the unit rebounded to do enough to move the ball, control the clock and help the offense net the Panthers a playoff win. The scrutiny does come from the left side, as Byron Bell allowed Cam Newton to be sacked.

But it wasn't just that play that stood out.

On another instance, the left side was penetrated without the defender being challenged, and it disrupted things in the backfield.

Carolina's offensive line has come a long way since September, and it helped Jonathan Stewart rush for more than 100 yards. But when the play brings into question the protection of the blind side or allows the quarterback to come up limping (which Newton did at one point), changes need to be made.

Hopefully, this unit can hold together long enough to allow Carolina an extended playoff run.

Charles Johnson, Kawann Short and Dwan Edwards are making a case to be a unit to be reckoned with on defense for this postseason. The three combined for four sacks and five tackles. Johnson's play was something to watch as he recorded both of his sacks on consecutive plays.

If Ryan Lindley has to see these guys again, it will be too soon. The Carolina defensive front made his life a living hell the majority of the game.

Star Lotulelei led the way among his peers with four tackles and helped the line control the game in the trenches.

This unit knew what it had to do going in and did just that. It took out the running game, limiting the Cardinals to just 27 yards on the ground. It disrupted the aerial attack by getting to Lindley and holding him to just 81 passing yards on 16 completions.

If anything, this unit will be counted on to lead the way next week.

Leave it to Luke Kuechly to rectify a Carolina turnover. After the Cardinals intercepted Cam Newton, Kuechly took it upon himself to make things right and picked off Ryan Lindley to preserve the Panthers' lead. In addition to his ball-hawking prowess, Kuechly led his team with 10 tackles.

Thomas Davis was right behind him with seven tackles, two of which were for losses.

It was a bit strange seeing just those two account for the unit's production, but that is what happened. Adarius Glanton was a non-factor despite starting.

Still, one has to appreciate the level of consistent play from the Carolina linebackers. Kuechly and Davis are both physical players and can make something happen in an instant.

The growth of the secondary has been a pleasure to watch over the past few weeks. Tre Boston had another big interception—this one inside the end zone after it was deflected by Luke Kuechly. Making the play even more impressive was his decision to surrender himself instead of going for the big return and potentially fumbling the ball.

Colin Jones led the unit with five tackles, and Bene Benwikere continued to play well opposite of Josh Norman.

The talented young cornerback kept his charges in check on Saturday. He spent much of the game covering Michael Floyd and held him to one catch for nine yards. He is gradually turning into one of the better cornerbacks in the league.

Brenton Bersin nearly messed it up early on. His muffed punt return allowed the Cardinals to keep possession instead of the Carolina offense taking control. Fortunately, his miscue was only a minor footnote in the box score. However, it did show a bit as the game progressed. Bersin was hesitant to make any returns and either called for a fair catch or just let it go.

But, with the bad, there is the good.

After the Panthers scored its first touchdown of the second half, the kickoff team was able to cough up a fumble from Ted Ginn Jr. The fumble was recovered by Melvin White, and the Panthers took over again with outstanding field position inside the Arizona 10-yard line.

Graham Gano was 2-of-3 in the field-goal department. The close score at halftime really highlighted the significance of his miss, but it worked out in the end.

Brad Nortman did a fantastic job of flipping the field. He kept giving the Cardinals poor starting field position, but his last time on the field was perhaps the most memorable sight as he tried running the clock out instead of punting with 11 seconds left in the game. He would step out for the safety with a little bit of time remaining, but he did what he was supposed to do.

Special teams play made some noise for both the wrong and right reasons on Saturday. The Panthers were able to capitalize on the right ones for much of the game.

Ron Rivera coached his kind of game and followed through with his pregame philosophy of maintaining his cool and composure. The way the game played out early, it could have gone south in a hurry. The only questionable thing he probably did against Arizona was leaving Jonathan Stewart out there late in the game.

With the score in the Panthers' favor and up two possessions, it was surprising to see Stewart still taking handoffs. Luckily, nothing happened, and Carolina's best running back will be available next week.

Sean McDermott really should be proud of his guys. The defensive play was a thing of beauty to watch, as the Cardinals had no answer. The unit was aggressive and opportunistic. He should get a lot of praise for how he coached this game.

Mike Shula continues to get results on the ground. His style may be conservative, but based on how things are improving on offense, he has the freedom to run the scheme he wants. Carolina is scoring and moving the ball. You can't ask for much more than that.

The Carolina Panthers finally got a postseason win with Ron Rivera and Cam Newton guiding the ship. There is still a long way to go, and next week's game will be a rematch from earlier in the season. However, this is a different team that is out to prove it belongs.