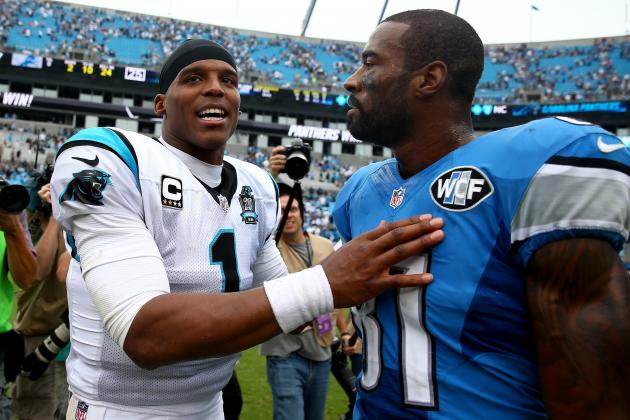 The Carolina Panthers (2-0) defeated the Detroit Lions (1-1) 24-7 in a close contest early on that saw the Carolina defense dominate the latter part of the game and allow the Panthers to come away with another win. There were a few questionable calls on both sides with a couple of them not being challenged. Regardless, the Panthers picked up their second win of the year.

Cam Newton made his debut after being sidelined an extra week to recover from his rib injury. His performance was decent, but some things were a bit concerning (more on that on the next slide). Injuries have struck the running game, as DeAngelo Williams was sidelined and both Mike Tolbert and Fozzy Whittaker were hurt during the game.

Fortunately, the defense was solid, and Carolina made big plays when it mattered most.

The following slides will break down the Carolina Panthers' performance on Sunday along with grades for each position.

As noted in the previous slide, Cam Newton made his debut after missing last week's game for recovery purposes. He was rusty at first and tended to overthrow his receivers. However, he did play a solid game that enabled his team to put points on the board and come away with a victory. He was 22-of-34 for 281 yards and one touchdown.

His performance was overshadowed by being sacked five times.

It would be remiss not to mention his running ability, and he did take off at times, four in fact. He rushed for 19 yards on the day, but he really needs to learn how to slide. There were moments when he took unnecessary chances and left himself vulnerable to big hits. He did himself no favors trying to score early in the game and landed hard on his knee.

In the end, Newton did not turn the ball over, and for a guy who hasn't played since the third preseason game, he played well. He spread the ball around and helped guide his team to victory.

Don't be surprised if the Panthers add another running back this week from the scout team or free agency. The unit is banged up. DeAngelo Williams missed the game because of a sore thigh. During the game, both Mike Tolbert and Fozzy Whittaker were hurt. By the fourth quarter, Richie Brockel was filling in as a fullback.

As for the Carolina rushing attack, 24 carries for 62 yards and a touchdown made up part of the offense against the Lions. It could have been a lot better, but concessions have to be made to the effectiveness of Detroit's defensive front four.

Jonathan Stewart led the way with 37 yards on 15 carries and the unit's only score. After Newton's 19 rushing yards, the next leading rusher wasn't a running back at all, but wide receiver Philly Brown with 11. Tolbert was stuffed and held to minus-five yards on the day, being rendered ineffective.

It's easy to knock the unit for the lack of production, but had everyone been 100 percent, things may have been different. In a winning effort, the running backs get a middle-of-the-road grade.

Greg Olsen is having the kind of year that could result in a Pro Bowl nod at the end of the season. His six catches for 72 yards helped pace the offense and gave Newton a reliable target to throw to in key situations.

Rookie Kelvin Benjamin had a drop in production based on last week's success. He hauled in two passes for 46 yards, but it wasn't for a lack of targets. He was targeted eight times, and six of those incompletions were a result of bad throws or dropped passes.

However, he was picked up by the veterans on the team in Jason Avant and Jerricho Cotchery. Avant had five catches for 54 yards and a touchdown, while Cotchery had four receptions for 46 yards and caught Newton's pass on a two-point conversion.

It was good to see parity among the unit, and not seeing one particular receiver targeted suggests that the Panthers will be able to spread out a defense and keep it from keying in on one man. Considering the woes of the running game, the receivers stepped up and helped Newton make the passing attack the driving force of the offense.

After playing very well last week, the line regressed in the team's home opener. The offensive line struggled to open running lanes and, even worse, allowed Cam Newton to be sacked five times. Early on, the line looked good. If anything, the linemen were successful at keeping the Lions defense away from their quarterback.

Still, there were struggles.

The lack of an effective running game could have hurt Carolina, but fortunately enough points were scored, and the defense was able to keep the Lions from scoring beyond their lone touchdown. Even more concerning was the number of times the line allowed Newton to be sacked. With any luck, there will be improvements.

Much like the running game, the offensive line's grade is reflective of the end result.

The defensive front of the Carolina Panthers was able to apply pressure early, but it took a while to bring down Matthew Stafford. When they were finally able to sack him, the floodgates opened, and the defensive "hog-mollies" dominated the Lions in the fourth quarter.

Greg Hardy was deactivated prior to the start of this game, but it made no difference as Mario Addison made up for his absence with 2.5 sacks. Defensive tackle Dwan Edwards added another 1.5 sacks on the day to bring the team total to four. A disruptive pass rush was needed to keep Detroit in check, and the defense delivered, especially in the final quarter.

Carolina even prevented the Detroit running game from breaking out, as the Lions only gained 70 yards on the ground. No matter what the team from the Motor City tried, the Panthers were there to shut it down.

Luke Kuechly's encore to last week's game may have been a bit lacking, but he still accounted for some important plays. He looked particularly impressive on a defended pass that Matthew Stafford threw deep over the middle while looking for his receiver. Kuechly would finish the day with 11 tackles.

Fellow linebacker Thomas Davis led the team in tackles and continues to amaze with his level of play. It's one thing to have a linebacker serving as a captain, but having two within the unit speaks volumes about how much respect each man has earned from his teammates.

The reason for the success of the defense can be attributed to the tandem of Kuechly and Davis, but the contributions of A.J. Klein and Chase Blackburn shouldn't be overlooked.

The secondary only had one job: to take Calvin Johnson out of the game. The Panthers defensive backs and safeties were able to do just that even though he caught six passes for 83 yards. It's still surprising that the incompletion called on him in the end zone was not reviewed because it looked very close to being a completion and a score.

Antoine Cason led the way for the unit with 11 tackles, and Melvin White had a huge pick deep inside Carolina territory after a Matthew Stafford pass was deflected by Thomas DeCoud.

Considering the amount of firepower the Lions bring to every game, the secondary did everything it needed to do and then some to give the team the best chance to win. The challenge was issued, and the Panthers defensive backfield prevailed.

Graham Gano kicked three big field goals and had a fumble recovery on a kickoff that would ultimately sink the Detroit Lions. It was nice to see his special teams contributions go beyond the kicking game. Of his three field goals, his longest was from 53 yards, and he showed up his Detroit counterpart, who really struggled Sunday.

Brad Nortman had six punts and averaged 44.8 yards. He would finish with 269 yards in that department.

Philly Brown only returned two punts for a total of eight yards. He would not get a chance to field a kickoff.

The mark earned by the special teams unit is courtesy of Gano, whose flawless kicking gave the Panthers points. He also deserves kudos for coming up with a fumble. That is something you don't see every day.

Despite a lost challenge early, the Carolina coaching staff stuck to its game plan and came away with a hard-fought victory. Ron Rivera had to go without two key members and made the most out of it. The running game was affected a bit, but all things considered, it could have been worse. Defensively, the team did not miss a beat, and the same kind of aggressiveness that defines Panthers football saw Matthew Stafford pressured early and often.

Rivera will have to address the unnecessary hit to Stafford when he slid and was hit on the helmet by Dwan Edwards, but for the most part the discipline was there.

Props to the coaching staff for starting out 2-0 and getting an early advantage within the division.

Wide Receivers and Tight Ends: A