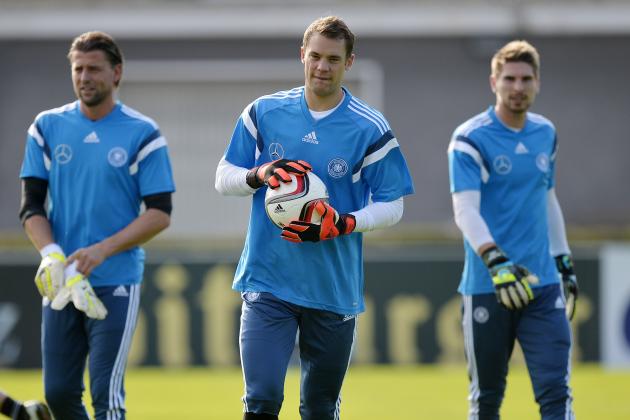 The Bundesliga has often been considered a gold mine of talent when it comes to goalkeepers fit to play in some of Europe's top teams.

Borussia Dortmund and Bayern Munich—two sides who often frequent the latter stages of the Champions League each season—both rely on German goalkeepers, while even Barcelona have decided to invest in young Marc-Andre ter Stegen as their next shot-stopper of choice.

Yet it isn't just the top teams who hold all the talent between the posts. From top to bottom, the German Bundesliga enjoys a rich wealth of keepers at most of its clubs, often making it the envy of other European divisions.

As such, it's time to dive into this anorak of shot-stoppers and finally decide which five goalkeepers rank as the best in the league.

Ranking the best keepers in the Bundesliga is no simple feat, and as such plenty of players could have quite feasibly made it into this list if it weren't for a few, significant factors working against them.

Kevin Trapp: The Eintracht Frankfurt keeper is perhaps best described as the "Rookie of the Year" within the Bundesliga goalkeeper's fraternity at the moment. He came up with his club following promotion only to shine against stronger opponents. This 24-year-old has a very bright future ahead of him.

Rene Adler: This 29-year-old keeper is one of the finest talents between the posts in German football today. Yet like his club Hamburg, Rene Adler struggles to match his potential on a weekly basis. He's a former Germany No. 1 who looks too out of form more often than not.

Ralf Fahrmann: This Royal Blues youth product has recently claimed the top spot at Schalke whilst drawing plaudits from across the league as a genuinely talented goalkeeper. Whatever some may say about the Gelsenkirchen club, it still has one of the strongest squads in the league, and it's no coincidence or fluke that Fahrmann is their keeper of choice.

Pepe Reina: Pepe Reina's inclusion may seem only necessary to quieten vibrant Bayern Munich fans, yet there's no denying that the Bavarian club's backup keeper would walk into most squads throughout the Bundesliga. Reina's career may be winding down, but he's still one of the best.

First on our list is 25-year-old Hannover goalkeeper Ron-Robert Zieler; he is one of the most well-regarded shot-stoppers in the Bundesliga and the current long-term replacement for Germany's No. 1 keeper.

Joachim Low is clearly a big fan of the player, having consistently picked him ahead of other young talents throughout the German top division.

However, due in part to the erratic form of his club in the past few seasons, Zieler's performances in the league have begun to destabilise. Along with other keepers stepping up their game, that puts him only in the fifth spot in our list.

Next in our countdown is the only foreign player to feature on the list: Wolfsburg's Swiss international Diego Benaglio.

Although the Wolves have been quite turbulent and inconsistent in their pursuit of Bundesliga success since Benaglio's arrival in 2008, the 31-year-old shot-stopper has proved to be something of a bedrock that each new manager has happily built his squad on.

Now under Dieter Hecking's rule, Wolfsburg have a good chance of making some sort of breakthrough at the top of the table with this solid player between their posts.

Many Dortmund fans will feel that only third place in such a list is doing a great disservice to everything Roman Weidenfeller has accomplished with them and Germany.

Yet the simple fact is that although Jurgen Klopp's side are sometimes the best in the Bundesliga, there's rarely been a case in which Weidenfeller has been the best keeper throughout the league.

Yet that isn't to say the German international isn't a superb keeper. In countless German and European campaigns, Weidenfeller has proved invaluable to the unquenchable appetite that his club possess for trophies at home and abroad.

At 34, this Dortmund keeper is getting no younger but shows each week at the Westfalenstadion that he still has plenty left in him to continue performing at the highest level.

Bayer Leverkusen's Bernd Leno makes it into second place on our list as one of the most exciting, young goalkeepers in the Bundesliga today.

With Ter Stegen's move to Barcelona this summer, Leno has reclaimed the title of shot-stopping prodigy within German football despite playing first-team football for Leverkusen for the past three years.

Since then the 22-year-old has gone from strength to strength at the Factory Squad and should now have his sights on silverware—whether at Leverkusen or elsewhere—as well as challenging for that first-team spot in the national squad.

Manuel Neuer unsurprisingly makes it to first place in our list of the top goalkeepers in German football at the moment simply because he's arguably the best in the world at what he does.

Germany has always had a strong history of accomplished shot-stoppers throughout the ages, yet what Neuer brings to a team is something that can only be measured alongside the best players within the sport.

Like what Cristiano Ronaldo and Lionel Messi do for the concept of the modern forward, Neuer encapsulates what a goalkeeper within today's game is all about. He is strong, confident and ultimately unbeatable in the air or when faced in a one-on-one.

What truly defines the Bayern keeper's talent is the fact that there are four other fantastic players on this list and not one of them even comes close to replacing him for club or country. Neuer is quite simply in a league of his own.

We'd like to send you the most entertaining Bundesliga articles, videos, and podcasts from around the web.