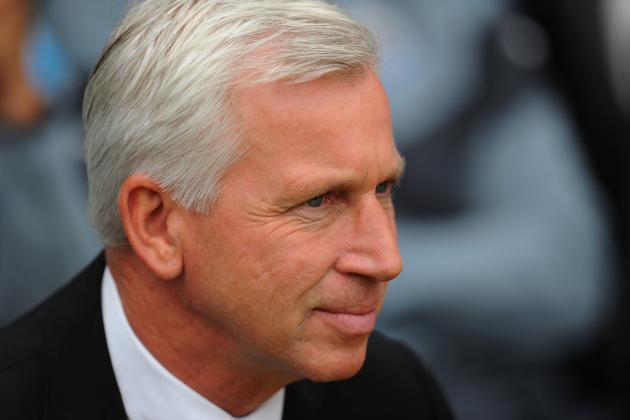 Despite making nine signings this summer, Newcastle United are still monitoring the transfer market ahead of the deadline in 13 days. And a quick look at their comings and goings explains why.

Young keeper Karl Darlow and centre-half Jamaal Lascelles both signed for the Magpies this month before returning to Nottingham Forest on loan as part of the deal, while right-back Daryl Janmaat is a direct replacement for Mathieu Debuchy.

In midfield, Jack Colback, Remy Cabella and Siem de Jong have boosted Alan Pardew’s ranks, but the departures of Sylvain Marveaux and Dan Gosling, plus the likely exit of Hatem Ben Arfa, as reported by the Daily Mail’s Craig Hope, evens things up.

And up front, where the Toon have waved goodbye to Shola Ameobi, Loic Remy and Luuk de Jong, three new faces have taken their places in the shape of Emmanuel Riviere, youngster Ayoze Perez and loanee Facundo Ferreyra.

In all, the fans have understandably welcomed much of the club’s business after two windows of complete inactivity, but the squad remains short in a number of areas.

So as the Premier League whirs into life after the first round of fixtures, Bleacher Report takes a look at the big concerns that need addressing on Tyneside before September 1.

While Newcastle United showed genuine promise going forward against Manchester City on Sunday, they lacked bite where it really matters—in front of goal.

Through the likes of Remy Cabella and Moussa Sissoko, the Magpies worked the ball into some good areas, but a lack of Premier League experience let Emmanuel Riviere down when it came to the crunch.

Alan Pardew will be hoping the striker’s confidence will arrive with time, but what the Toon boss would really like is to boost his attacking options with one more signing, as suggested by The Journal’s Neil Cameron.

Top target Alexandre Lacazette has postponed a move to England—for now at least—and told Le Parisien (via Sky Sports) that he’s happy to remain at Lyon for another season.

The Toon’s other big hope has also rebuffed a switch to Tyneside, with Loic Remy ruling out a move from Queens Park Rangers, via the BBC, despite a successful loan spell at St. James’ Park last term.

All of which means Pardew and Co. may have to go with what they’ve got for the 2014-15 campaign, despite the clamour for a new man to carry the burden upfront.

Another area where Newcastle showed promise at the weekend was in defence, where Mike Williamson and captain Fabricio Coloccini looked solid for the most part.

At left-back, Paul Dummett did well enough in a department where United are well stocked. First-choice Davide Santon is currently injured, while Massadio Haidara is also an able deputy.

Over on the right, however, while Daryl Janmaat did little wrong on his Toon debut, any kind of absence from the Dutchman would leave the Magpies horribly exposed.

Mapou Yanga-Mbiwa proved on more than one occasion last season that he’s no full-back, while moving midfielder Vurnon Anita out of position to cover is a last resort.

Speculation has surrounded Yanga-Mbiwa all summer, and while the Evening Chronicle’s Lee Ryder suggested the Frenchman had earned a second chance under Alan Pardew, a late bid from his homeland would be telling.

Steven Taylor is another name causing concern on Tyneside at the moment, with the Daily Mirror’s Simon Bird reporting that the club want to offload him, while the player himself wants to stay.

Should either of them move on over the next fortnight, Pardew would have to move—and move fast—to find a suitable replacement.

But even if Taylor and Yanga-Mbiwa remain at St. James’ Park, there’s no denying an extra defender of the versatile variety would not go amiss.

With fan-favourite Hatem Ben Arfa expected to leave Newcastle before the window closes after being frozen out by Alan Pardew, cover out wide is a must for United this term.

The French maverick has been banished to the reserves over the summer and was also stripped of his No. 10 shirt, as reported by the Daily Mirror’s Simon Bird.

At the moment, the Magpies are making do with the likes of Moussa Sissoko and Yoan Gouffran—both players who are capable down the flanks while not being recognised as out-and-out wingers.

Remy Cabella is another who can operate on either touchline but is far more effective in a free role that lets him exploit his creativity and unsettle the opposition.

Beyond those three, Rolando Aarons looks a raw yet explosive talent who will make plenty of cameos from the substitutes' bench, while Gabriel Obertan is unlikely to nail down a starting spot.

Meanwhile, the latest name to be linked with a move to the Toon is Scott Sinclair—a player who worked alongside Pardew during his days as a Charlton Athletic loanee.

Manchester City boss Manuel Pellegrini has made the 25-year-old available for transfer, according to Stuart Brennan of the Manchester Evening News, who also suggests defender Micah Richards is on Pardew’s radar.

We'd like to send you the most entertaining Newcastle United articles, videos, and podcasts from around the web.