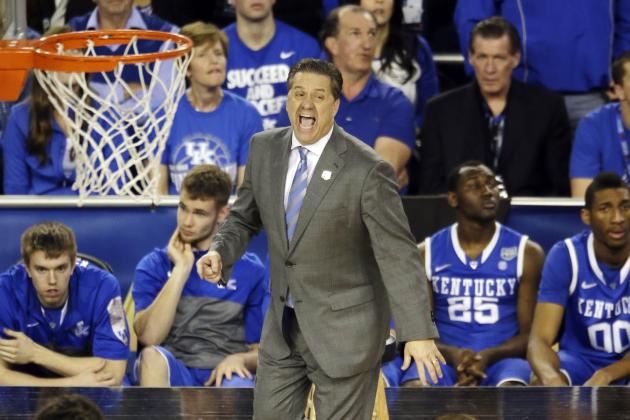 It's not March Madness, but Kentucky basketball treated us to the college hoops version of Christmas in July August today.

With ESPNU's cameras rolling, Big Blue Nation throttled Champagne Chalons-Reims 81-58. A slow start preceded a strong finish, and all the while analysts and fans took to Twitter to share their thoughts.

Within lie the three key themes of that social media chatter.

They haven't played against their peers yet, but Tyler Ulis and Karl-Anthony Towns were impressive in their second game against professional competition.

@GoodmanESPN Yup. Offense just looks so much smoother with him on the floor. And that's saying nothing of his defensive ability.

I've said it before, but John Calipari is going to have a hard time keeping Tyler Ulis out of the lineup this season.

That's not to devalue the Harrison twins, but Ulis adds a new element to the Wildcats: the ability to probe and break down a defense with his handles, court vision and passing skills.

How long the Wildcats can thrive with their best floor general as a bench player remains to be seen, as Dauster alluded. Ulis could potentially coexist with both Harrisons simultaneously, but odds are one twin will have to take a back seat.

As for Towns, the 6'11" freshman displayed his own high basketball IQ with a few nifty post moves and passes. He was the star of the box score with 19 points, 10 rebounds and three assists.

Champagne Chalons-Reims is a professional team in France's A division, but former college stars Da'Sean Butler and Tasmin Mitchell are Chalons-Reims' best players.

Kentucky trailed by eight points 12 minutes into the game, spurring speculation as to how the Wildcats would fare against an NBA team.

Chalon-Reims has some very good players, but isn't close to an NBA team, and UK is in a dog fight

@GoodmanESPN @BSnowScout Those arguments are the dumbest. Should have them challenge the Spurs' summer league team instead.

Goodman and CBS Sports' Jeff Borzello love to joke around with each other on Twitter, so don't take Goodman's accusation too seriously. Borzello retaliated with a good comeback: Before we talk about the Wildcats beating a NBA team, let's see them pitted against a squad of players who were either already signed by a summer league team or drafted.

Sure, Willie Cauley-Stein and Trey Lyles were not available today, and the Wildcats still won by 23 points. But let's avoid the "Kentucky could beat the 76ers talk" for a bit.

With associate head coach Kenny Payne running the show today, Calipari watched and took notes from the sideline. But he took a brief break from taking a break to assist ESPNU's team.

You know life is good when your team beats a professional squad by 23 in August and you can simultaneously pick up a new hobby.

Follow Kentucky Wildcats Basketball from B/R on Facebook and get the latest updates straight to your newsfeed!

We'd like to send you the most entertaining Kentucky Wildcats Basketball articles, videos, and podcasts from around the web.