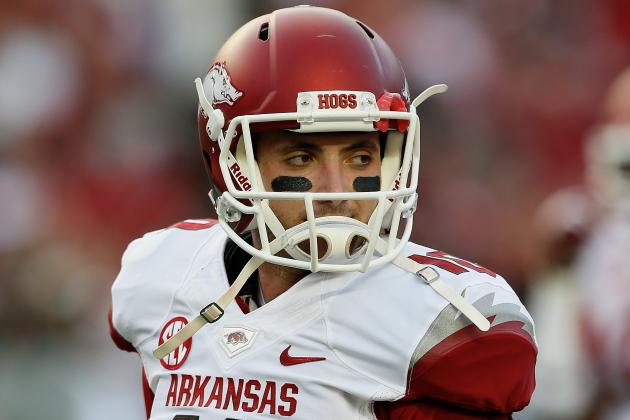 There have been some very memorable recruiting classes for the Arkansas Razorbacks since the turn of the millennium. Some of the more memorable ones that come to mind include 2001 (Matt Jones and Shawn Andrews), 2005 (Peyton Hillis, Felix Jones and Darren McFadden) and 2008 (Joe Adams, Jarius Wright, Ryan Mallett and Tyler Wilson).

For college football fans, it's always fun to take a look back at past recruiting classes and see how they did on the field compared to their ranking coming out of high school.

One class that hasn't been all that great despite a solid national ranking of No. 21 by 247Sports.com is the 2011 haul. Here, we re-evaluate the prospects signed at each position and assign grades based on how they've performed on the field.

If you follow Arkansas, then you know all too well the struggles of Allen. After redshirting in 2011, he had to start against Alabama in 2012 when Tyler Wilson went down with an injury. It wasn't until last year that he became the starter, and he had some serious ups and downs with the role.

The big problems for him have been accuracy and decision-making. To be blunt, a ratio of 13 touchdowns to 11 interceptions is not going to win games.

In Allen's defense, his supporting cast out wide didn't help him much. The receivers this year should be much improved, which will help him make more plays.

He looked much improved this spring and is going to be the starter in 2014, at least to begin the year. While his career hasn't been great so far, a good season this year would make this grade a lot better.

The Hogs also signed just one running back in the '11 class with Walker. His career has been marked by injuries that have set him back. His future looked promising after his first three games as a freshman, when he rushed for 68 yards on 20 carries with five touchdowns. Stress fractures in his shins kept him from playing the remainder of his first season.

His sophomore campaign saw a similar result as he played in the first two games before missing the rest of the season with a broken leg. The duo of Alex Collins and Jonathan Williams and the emergence of Korliss Marshall left Walker on the outside looking in. He had just six rushes in 2013 for 32 yards. With star fullback Kiero Small gone and Walker behind a number of backs, coach Bret Bielema moved him to fullback this spring, where he looks like he will win the starting job.

Walker has had a rough career, but he's kept his confidence and optimism through it all and is working hard to make contributions in his last year in any way he can.

Despite the very talented wideouts signed in this class, receiver was one of the more forgettable positions in it.

The best player signed was Wade. You know that a player was a disappointment when his most memorable play was a cheap shot on a punt returner after he called for a fair catch.

A troubled young man, Wade was eventually kicked off the team in 2012 after being charged with felony residential burglary. He was found guilty and sentenced to six months in a state correctional facility and 60 months of supervised probation.

Funderburk never recorded a reception in his time with the Hogs and eventually transferred to Syracuse, where he is expected to be one of the Orange's top receivers in 2014, according to Nate Mink of Syracuse.com. McKinney was recruited as a wideout but has since made the switch to safety, where he has played as a sub the last two years.

Minor had a minor impact for the Hogs—pardon the bad pun—and eventually opted to transfer last summer. Whitehurst had a similar fate, eventually transferring to South Carolina.

Out of the five receivers signed, just one remains, and he's not even lining up out wide anymore.

There isn't a whole lot of evaluating to do here. Peterson never made an impact, and his career as a Hog ended along with Wade's after the robbery incident. He was also sentenced to six months in prison and 60 months of supervised probation.

This was one of the better units recruited in the '11 haul. The best of the bunch has been Cook, who started 11 games last year and has 17 starts to his credit. He'll anchor the right tackle spot this year as a senior. Beck is listed as the backup at left tackle behind Dan Skipper and looks like he will finally be a key player in the rotation.

Smothers hasn't necessarily lived up to his ranking, but he has been a good player for the Razorbacks. After starting four games his freshman year, he redshirted in 2012 while working with the scout team. He appeared in five games last season, making four starts before coaches placed Denver Kirkland in the starting lineup. With Reeve Koehler back from injury, Smother will more than likely act as a backup, but should still see a lot of action.

While he has spent his first three years redshirting and working on the scout team, Danenhauer will finally see the field on Saturdays as well. The two-deep depth chart on HawgSports.com currently lists him as the backup to Kirkland.

Peacock is the only recruit from this class who is gone. He signed out of the JUCO ranks and made some big starts during his career. He's now on the Pittsburgh Power of the Arena Football League.

This was another group that turned out to be very solid. The Razorbacks have always been good at getting under-the-radar prospects who end up being great college players. Flowers is a perfect example of that, as he barely obtained 3-star status in the 247Sports' composite rankings.

He's been one of Arkansas' best rush ends the last two years and is looking to cap off his career with a great senior season. Over his first three years, he has recorded 122 total tackles, 32 tackles for loss and 12 sacks, along with earning All-SEC honors.

The highest rated D-line prospect was Gosha, who played in the Hogs' first four games in 2011. However, he didn't see the field after that and quit the team late in the season. He's now a junior at Troy.

Kelly-Thomas is the only other D-lineman from the '11 haul to depart from the program. He redshirted his freshman year and appeared in three games in 2012 but didn't play last season and announced in February that he was leaving, per WholeHogSports.com's Matt Jones.

Arkadie hasn't seen much action thus far as a Hog, but that should change this year. He's currently listed as the backup at defensive tackle to rising star Darius Philon and will be in the main rotation.

Hodge has seen a lot more action than Arkadie. After redshirting in 2011 and spending most of the time watching in 2012, Hodge played in 11 games in 2013, recording 27 total tackles, 2.5 tackles for loss and one sack. He's expected to start alongside Philon this year.

The last of the bunch is Ollison, who was quickly moved to offensive tackle once he joined the team. Since redshirting in 2011, he has appeared in 12 games and made five starts in 2013. He'll back up Cook this season and see the field a good deal.

Overall, this was a good group. Four out of the six players signed are on the roster, with two already making impacts on offense and defense and the other two primed to contribute in 2014.

Yet another very underwhelming unit, the linebackers who were signed in the 2011 class are mostly forgettable. The only guys that most Hog fans know from this bunch are Alonzo Highsmith and Kiero Small, who made his mark on offense.

It should tell you something when the best player from this group didn't even stay at linebacker. Small made a name for himself at fullback by bulldozing over defenders and opening up holes for running backs to go through. He was a tireless worker and a big reason why Arkansas had nearly two 1,000-yard rushers last year. His hard work paid off as he was drafted by the Seattle Seahawks in the seventh round of the NFL draft.

Highsmith came to Arkansas as a junior and started every game in 2011, totaling 80 tackles, 12.5 tackles for loss and 4.5 sacks. He was leading the team with 54 tackles his senior year before suffering a foot injury that ended his career as a Hog.

Atiga, Gilbert and Haman had no impact in Razorbacks jerseys. Atiga was with the team until his final season last year but never was able to make an impact on the field. Haman transferred to Arizona State after the Bobby Petrino debacle, and Gilbert was dismissed from the team after pleading guilty to burglary and receiving 12 months probation.

The most successful secondary recruit from the '11 class has been Mitchel, who came in as a freshman and started seven games while appearing in all 13. He has played in 32 games through three years and made 24 starts. As talented as he is, he has been inconsistent. The defense needs him to be consistent and a leader in his senior season.

Gaines turned out to be a very solid addition to the secondary. Following 2011 when he redshirted, he was named a Freshman All-American and made the SEC All-Freshman Team after recording 75 tackles and four pass breakups in 11 starts. He saw his playing time dip a bit last year but is expected to start this season at safety and have his most productive season yet.

Since redshirting in 2011, Fisher has appeared in just eight games over the last two years. Now a junior, the two-deep depth chart doesn't have him listed, so he's fighting an uphill battle for playing time. Sims didn't have any impact whatsoever, never playing a down for the Hogs.

The fact that Gaines and Mitchel have had solid careers makes the grade for this unit a little better.