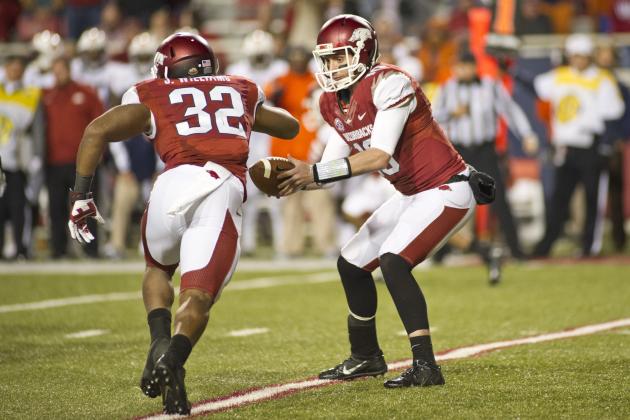 The Arkansas Razorbacks start the 2014 schedule with a trip to Auburn to face off with the national runner-ups from last season. There's not going to be any time to ease into the season against a weaker opponent by opening the season on the road against the Tigers.

What's even scarier is that the Hogs have many more huge and extremely tough games following their daunting season opener.

Just to give you a little perspective on how tough Arkansas' 2014 slate is, according to the NCAA's strength of schedule method, the Razorbacks have the toughest schedule out of all of the 128 FBS teams. The NCAA's method is based solely on opponents' win-loss records from the previous year, with Arkansas' 2014 opponents combining to go 103-54 (65.6 percent) last season.

While there are flaws with this method, there's no doubt the Hogs' schedule this season is going to be grueling.

Here is a breakdown of the Razorbacks' games this year in ascending order from the easiest to the toughest matchup they'll have.

By far the easiest game on the schedule and one of only two games you can chalk up as a guaranteed win, Nicholls State is nothing more than a schedule-filler and tune-up. The Colonels played against three FBS programs in 2013, but they were obviously in over their heads.

While they did play Western Michigan close, 27-23, the Colonels lost their other two games against FBS teams Louisiana-Lafayette and Oregon, 136-10. Nicholls State went just 4-8 overall and 1-6 in conference play, so expect an easy win for the Hogs.

Bill Clark is the new sheriff in town, and he has a tough rebuilding task ahead of him, inheriting a team that went 2-10 overall and 1-7 in Conference USA. Their only two wins came against the FCS' Northwestern State and fellow C-USA member Florida International. Arkansas should have no problems beating a team that gave up more than 30 points in nine games and more than 50 in six.

Don't let the rank of this game fool you. The Northern Illinois game is only this low because the Hogs play in the SEC, the most dominant and strongest league from top to bottom.

The Huskies started off 2013 by going a perfect 12-0 in the regular season before losing in the MAC title game to Bowling Green and Utah State in the Poinsettia Bowl. Still, a 12-2 campaign is pretty darn impressive.

The problem for the Huskies is quarterback Jordan Lynch is gone. Northern Illinois' offense ranked fifth in the country, amassing 7,277 yards over the course of 14 games. Lynch accounted for 4,812 of those yards, or 66.1 percent of the total offense if you want the jaw-drop effect. With Lynch gone and it being a home game, Arkansas should handle business, but it would be ill advised to look over them.

Texas Tech head coach Kliff Kingsbury has spirits high around Lubbock after guiding the Red Raiders to an 8-5 (4-5 Big 12) record and a win over Arizona State in the Holiday Bowl in his first season. The Razorbacks' best chance to win a road game will be their game at Texas Tech.

With it being the Hogs' third game of the season, a road win early on in the year would do a lot for the team's confidence going forward. The Red Raiders started 2013 at 7-0 before losing five consecutive contests, including three at home. Expect a heavy dose of Alex Collins and Jonathan Williams as Texas Tech ranked 98th nationally in rushing defense last year, allowing 201.5 yards per game.

I like Arkansas' chances if it can be effective on the ground and keep a dangerous Red Raiders offense off the field.

It was a successful 2013 for the Missouri Tigers to say the least, winning the SEC East, beating Oklahoma State in the Cotton Bowl and finishing the year 12-2. However, things look like they're going to come crashing back down to earth in 2014. A big reason for that is the talent lost.

That group includes quarterback James Franklin, running back Henry Josey and wideouts L'Damian Washington and Dorial Green-Beckham, who was kicked off the team in April and is now being linked to Oklahoma, according to Chase Goodbread of NFL.com. The Tigers also lost seven starters on defense, including the defensive end duo of Kony Ealy and Michael Sam.

With a much-improved Arkansas team and a Missouri squad that will probably be limping down the stretch, this will be the Hogs' best chance for an SEC road win.

Mississippi State finally beat Arkansas in the Natural State, and it took everything it had, winning a close game, 24-17, in overtime. The next week, the Bulldogs beat Ole Miss in the Egg Bowl to earn a bid to the Liberty Bowl, which they won easily, 44-7, over Rice. That three-game winning streak to end the year cooled off Dan Mullen's seat for now.

The Hogs are going to be looking for revenge, but they'll have to drown out the irritating cow bells and slow down the dynamic Dak Prescott.

Though Arkansas has had a rough last two years, the Hogs have played the Ole Miss Rebels very close. The Rebels posted an 8-5 (3-5 SEC) record last season, ending their campaign with a victory over Georgia Tech in the Music City Bowl.

Hugh Freeze has done an excellent job bringing in top-tier talent to Oxford. The Rebels lost a lot of talent to the NFL draft, but they have a lot of young players with a year of experience under their belt. This year should be another close battle and will come down to which team wins the fourth quarter.

The facts that Arkansas' game against Texas A&M is on a neutral field and that the Aggies no longer have Johnny Manziel or Mike Evans keeps this matchup from being any higher. What really plays in the Hogs' favor is that this is just the fifth game for both teams, meaning the Aggies' new quarterback will still be getting comfortable in his new role.

Whoever that ends up being, he also won't have All-American tackle Jake Matthews blocking for him. Add on that the Aggies have had one of the worst defenses in the country the past few years—they were 109th nationally last year—and you have to like the Razorbacks' chances of leaving Jerry's World with a big win.

The rivalry between Arkansas and LSU, also know as the Battle for the Golden Boot, is one of the most underrated in the country. Even in a season like last year where the Hogs didn't win a conference game, their meeting was still closely played, as Arkansas fell, 31-27, on a last-minute touchdown by the Tigers in Death Valley.

Like many other powers in the SEC, LSU has a lot of holes to fill by departed stars. Quarterback Zach Mettenberger is gone, and his replacement won't have Odell Beckham Jr. or Jarvis Landry to throw to. LSU will look to its defense to shut down the Hogs and quiet down a raucous crowd in Razorback Stadium. It very well could come down to which offense can make more plays.

The last time Arkansas played the Georgia Bulldogs was in 2010, when Ryan Mallett led the Hogs to a 31-24 win in Athens. This year's game will be played in the friendly confines of War Memorial Stadium. The Bulldogs are another SEC power looking for a new quarterback after Aaron Murray, who holds many school records, was drafted.

However, running back Todd Gurley, barring any further injury, will be 100 percent. Slowing him down would go a long way in trying to pull off the upset. That's easier said than done, and the Hogs will still have to find ways to score points on a stout Georgia defense.

Ranking the toughest game on this year's schedule was challenging. There were a lot of things to take into consideration, but the second-toughest game will be the Hogs' season-opener at Auburn. The Tigers are coming off of a miraculous season that saw them go from not winning an SEC game to winning the conference championship and finishing as national runner-ups.

Tre Mason is gone, but Nick Marshall remains under center, and Auburn still has the brilliant offensive mind of Gus Malzahn. It's going to be critical that the Razorbacks stay in striking distance early on. If the Tigers' rushing attack starts getting big chunks of yards, Arkansas won't stand a chance, especially in a very loud Jordan-Hare Stadium.

The toughest game on the 2014 slate for the Razorbacks will be the Alabama Crimson Tide, which was ranked No. 2 in ESPN's early preseason top 25. A big reason why this is Arkansas' toughest game is not just because of all of the winning Alabama has done in recent years, but also because of the huge amounts of problems the Razorbacks have had against them since Nick Saban became their head coach in 2007.

Arkansas hasn't beaten the Crimson Tide since 2006, losing every game in the series since Saban took over. The past two years, it hasn't even been close, as the Hogs have been outscored 104-0. Alabama is yet another team that lost a star at quarterback in AJ McCarron. However, they still have a ton of talent across the board. As we all know, Alabama doesn't go through rebuilding processes after losing a guy like McCarron; they just reload.

The Razorbacks' chances of ending their seven-game losing streak to the Crimson Tide this year are slim. It's going to take a nearly flawless effort from the whole team to even have a chance.

Bryan Heater is the featured columnist for the Arkansas Razorbacks football team. Follow him on Twitter @BHeaterRivals.