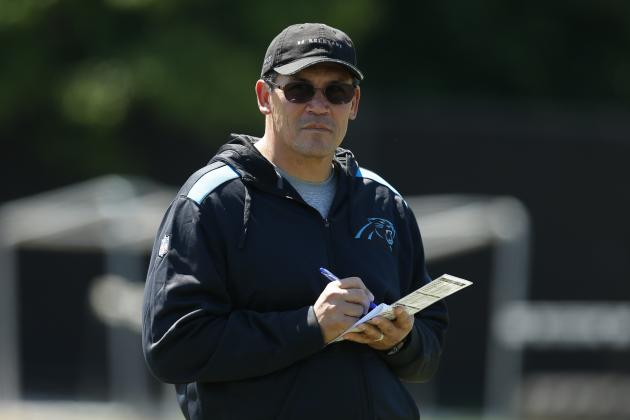 CHRIS KEANE/Associated Press
Ron Rivera and his staff will be evaluating his team this summer.
12.8K
Reads
17
Comments

The NFL is a business as well as its 32 teams. Each has an obligation to be successful, and sometimes that means parting with certain veterans, despite their previous contributions. This was the case with former longtime Panther and fan favorite, Steve Smith.  The Carolina Panthers' front office and coaching staff felt it was time to move on without him, and they made the difficult decision to cut him.

That was only the early weeks of the offseason, too.

Since the conclusion of the draft and the pending start to organized training activities (OTAs) and training camp, the team's veterans have to realize the importance of playing well.  Some know they will have a job at the end of August.  Others, who are at the tail end of their career, will have to fight off the up-and-coming rookies who are hungry to replace them.

This presentation will discuss a few veteran players who are on notice headed into camp and possibly through the 2014 season. For some, a poor showing could mean their jobs, while others will have to compete with younger talent that is either a rookie or has been with the team for a year or two.

The Carolina Panthers have a lot of money tied up in their backfield.  Collectively, DeAngelo Williams and Jonathan Stewart are costing the franchise approximately $2.64 million.  Williams is the oldest among the two, but he has been more durable than his teammate. However, his production has dropped considerably since 2009—his last 1,000-yard season.

Williams rushed for just 843 yards and scored just three times. For a team needing its running game to take the pressure off Cam Newton, that isn't a great statistic. If Stewart can play a full season and be a big contributor in the offense, everything may be a lot easier.

There is no denying the talent and ability of Jonathan Stewart. There's also no denying the fact he has been battling injuries off and on since 2012. He seems to relegated to a backup role, despite splitting carries with Williams. Stewart has been doing what he can to get back into playing shape and be a contributor on the field.

He may have one more chance to prove himself in 2014.

Carolina went out and drafted running back Tyler Gaffney in the sixth round. He may not be a huge playmaker in his first season, but he could definitely make a statement that he is the future of the Carolina backfield with a solid rookie performance.

Stewart has only appeared in 15 games since 2012, rushed for 516 yards and scored just once. As mentioned before, Williams has been durable and could still be a major factor in the running game. With the question marks surrounding Stewart's reliability, a slip-up this season could mark the end of his career with the Panthers.

The one thing working in Stewart's favor is his price.

He is a cheaper option than Williams whose 2014 salary is approximately $1.9 million. By comparison, Stewart is making $785,000. However, it will come down to whether or not his performance can justify that contract, despite the fact his deal was restructured last year.

Hopefully, he can rebound from his injury and be a productive member of the offense. If not, a lot of money will be tied up in a liability. Williams' contract runs through 2016, while Stewart's expires in 2018. If there is anything left from these two, the time is now to prove it. Otherwise, it will be time for the Panthers to start making changes.

Yes, he was signed to a two-year deal this offseason. It stands to reason, he will be starting at safety when the season opens. However, he has a talented youngster behind him in Robert Lester who joined the Panthers as an undrafted free agent in 2013. The competition is there, and if Lester continues his progress, Harper could be done after one season in Carolina.

That is not to say Harper won't be an asset while he is with the Panthers. His knowledge of the NFC South will prove vital over the course of the season, and he should have a lot of useful knowledge to pass along to Lester who is still learning.

It's likely Harper sticks with the team over the course of his contract.

Just don't be surprised if he is let go after just one season with Carolina, if Lester proves ready to assume the starting job on a regular basis.

Granted, both Josh Thomas and Josh Norman are both still young. But, the cornerback position is getting crowded with the addition of Bene Benwikere through the draft and Carrington Byndom through free agency. The duo has shown the ability to be decent players, and both have some experience as a starting corner in the secondary.

The offseason rookie additions will serve to breed excellence through competition.

Thomas and Norman may not be specifically singled out in the competition battle, but it seems unlikely the more seasoned vets, such as Charles Godfrey, will be put on notice this season. Carolina was able to restructure his deal, and he should provide a strong, veteran presence at cornerback until a younger defensive back is ready to step up.

Melvin White looked good in his rookie season, and while he could be a backup in 2014, he should compete for a starting job. As far as veteran corners go, it seems as though Thomas and Norman could be the odd men out.

Byron Bell has the backing of his coaches and the Carolina front office to be an asset at left tackle. Others are not so sure of it. Bell struggled at times at right tackle, and the Panthers did not make any moves during the draft to find a replacement for Jordan Gross at left tackle.

The possibility that Bell is moved over to protect Cam Newton's blind side is a possibility, but the reason he may be put on notice is due to the signing of a top-five pick from the Canadian Football League.

David Foucault could usurp Bell as an OT if he plays well enough in camp and during the preseason. He is a big lineman, and he impressed coaches during Carolina's rookie camp. Whether or not it will be enough to move Bell off the line and potentially off the team is still unknown.

Bell has the luxury of knowing that there isn't much depth at the tackle position, and the lack of talent could force the Panthers to keep him on the roster. That is not to say he needs to be lackadaisical in his preparation.

The Panthers are determined to strengthen the offensive line and do what it takes to get the job done. The left side may be easier for him, but he will need to show his coaches he is more than capable of holding down the outside edge and protecting his quarterback.

It seems unnecessary to place a wide receiver who has been at the bottom of the depth chart on this list, but the need to begin anew at the position and groom younger, healthier receivers is the driving force behind Kealoha Pilares making an appearance on this list.

Pilares has been primarily a special teams player for much of his NFL career. He has 32 kick returns for 806 yards and a score. After that, his production has been nothing to write home about. He only has two catches for 42 yards and surprisingly enough, one of those catches was a touchdown.

He battled injuries last year, and that could affect his ability on special teams. With the new faces appearing on the Carolina roster, Pilares may have to prove more to his coaches that he is fully recovered from his knee injury. He will have to compete against a bevy of new receivers who could play in the offense and on special teams.

The receiver battle will be a crowded affair, especially for the bottom part of the depth chart. Even trying to make it as a return specialist could be daunting, and much of Pilares' battle will stem from how well he can run and make cuts on his knee.

Player stats provided by Pro-Football-Reference.com, and contract information was retrieved from Spotrac.