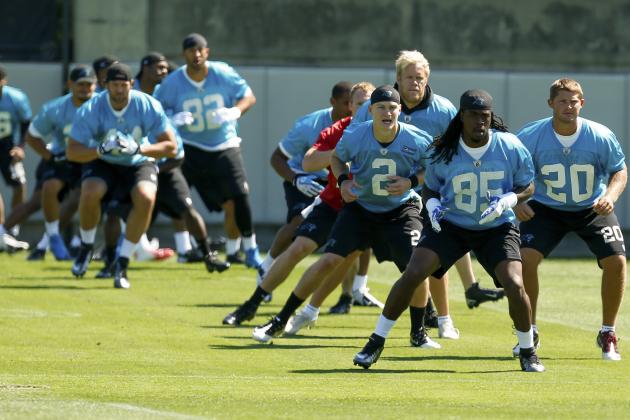 The Carolina Panthers have rounded out their 90-man roster but will soon begin trimming the fat, as Dave Gettleman and his coaching staff will narrow down the roster to 53 players. Some players will be locks, while others will have to fight from minicamp to training camp to secure a place on the final roster.

Each position has its share of veterans and newcomers. How they will fare this summer will depend on them and their performances. Carolina signed a few undrafted rookies last year who ended up making the final team. A couple of them, Robert Lester and Melvin White, did well when given the chance to be on the field during the season.

There is reason to believe that history can repeat itself once again.

Which players will make the cut? It may be early, but here is a projection of how the roster could look when September rolls around.

Analysis: There may be some competition for Anderson's backup job with the additions of Joe Webb and Matt Blanchard. However, Anderson has a slight advantage of the playbook working in his favor. Webb may be a dark-horse candidate for the job but could be resigned to stand on the sidelines in street clothes on game day should he make the final cut.

Everyone will have to begin working with the new crop of receivers that are on the team. This will be especially important to Newton, who just had the boot removed following his ankle surgery. The only drawback for him is the timeline for getting back on the field, as he is scheduled to miss a lot of preseason workouts.

Analysis: Williams should be the guy to start on opening week. Stewart is a capable starter as well, but his durability the past couple of seasons has limited his on-field action. The tandem, once known as Double Trouble, should continue to split carries during games. If both men can stay healthy, the running game will be in good shape.

Tyler Gaffney was the Panthers' final pick of the 2014 draft and could be a factor in short-yardage situations. It would not be surprising to see him spell Stewart deep inside opposing territory for power run formations. Additionally, he offers good blocking ability, so it would appear Carolina got a well-rounded running back that could possibly move up on the backfield depth chart.

Analysis: Tolbert will be instrumental in the short game and on goal-line situations. If he is paired with Gaffney on such plays, Carolina could potentially beat up defenses up the middle with rookie Trai Turner leading the way. The toughness and strength of both backs makes this aspect of the running game very difficult to stop.

Analysis: Aside from Cotchery and Avant, the Panthers will be looking very young at wide receiver in 2014. The timing of Newton's return will be critical, as he needs to build chemistry with his new receiving corps. Cotchery and Avant will be counted on to help mentor the rookies, especially Kelvin Benjamin.

Benjamin will need to step up and prove his detractors wrong. Thus far, he has looked good in the rookie minicamp, but the real test will come when the pads are put on and he starts competing in live drills and scrimmage activities.

The supporting cast is young and talented, so they could see some brief action in 2014. Of the group, Underwood could be a dark-horse candidate to emerge as a solid second or third receiver after Cotchery and Avant's contracts end. Regardless, all three backups are worth keeping an eye on during camp and the season.

Analysis: Last year, Olsen led the team in receiving, and while he will be a factor once again in the offense, it would be nice if a wide receiver had the distinction of being the team's leader in that department. As always, Olsen will provide a safety net for Cam Newton and should be a big target in the end zone. He and Kelvin Benjamin could really create problems inside the red zone, so defensive backs and linebackers need to be aware.

Dickson has been a decent receiving tight end during his career, and depending on how well he plays or how much field time he gets, he could establish career highs for himself in receiving. Brandon Williams could be an under-the-radar pass-catching tight end and could be used to sub for either Olsen or Dickson, assuming he makes the cut and the team carries three tight ends.

For now, we'll assume they go with two.

Analysis: The other who's who unit of the Carolina Panthers, there will be no shortage of new faces gracing the offensive line in 2014. Ryan Kalil will be the captain of this unit and will need to ensure his guys are doing their part to win the battle in the trenches. Bell and Silatolu make up the rest of the veteran presence on the team, but both have some uncertainty surrounding them.

Turner could be considered a draft day steal, and if he can dominate defenders like he did in college, he will become the best friend of the Panthers' running backs. Foucault is a dark-horse candidate to start for the Panthers at right tackle. He was drafted fifth overall in the Canadian Football League's draft, so he does have some credibility at the position. Still, he has to make it through the first round of workouts before training camp begins, but there is a lot to like about him early on.

It wouldn't be surprising to see offensive tackle J'Marcus Webb join the team later, as he was worked out by Carolina this weekend.

Analysis: The strength of the Carolina Panthers is their defense, and this defensive front is one of the best in the league. Greg Hardy's legal situation notwithstanding, the defense will be locked down by rookie Kony Ealy and veteran Charles Johnson. The interior of the line will remain intact and could see Short emerge as a starter next to Lotulelei.

The Panthers could very well open the season without Hardy or Frank Alexander, and if that is the case, Ealy will be called upon to be an impact player from the start. Fortunately, he has a great group of linebackers behind him.

Analysis: It's hard to imagine a stout linebacker unit being stronger or better than last season's, but that is a real possibility in 2014. The starters from last year will return and could feature some talented backups as well.

The man to watch from this year's rookie camp is Denicos Allen. He may be an undersized linebacker, but he proved in college he can play the position. If Allen can overcome the big blockers on offense, he will be a nice asset to have coming off the bench in a situational role.

Kuechly and Davis will be the leaders once again, though the former has asserted himself as not only a defensive captain, but as a team captain, too. Blackburn and Klein did well last year and could give coaches an interesting positional battle to watch.

Analysis: The interior of the secondary will be similar to last year—it will feature veterans who are signed on short-term deals while having capable young backups. Roman Harper has traded New Orleans black and gold for Carolina black and blue. His best years are behind him, but he brings experience and will be an asset when preparing for the Saints later in the season.

Thomas DeCoud is another safety who is familiar with the NFC South, having played with the Atlanta Falcons for much of his career. Both men will help the Panthers navigate their divisional schedule, which looks a lot stronger this time around.

Robert Lester could be a spot starter or see a lot of action as a supporting player. He will get the chance to learn from the veteran Harper, and after his contract is up, Lester should be ready to assume the starting job.

Tre Boston will gain some valuable experience working with this group as he develops into a professional football player.

Analysis: Godfrey and Cason will probably lock down the starting jobs at cornerback, although there is a chance that Godfrey may be used primarily as a nickel corner. Regardless, Carolina has proven backups in White and Thomas.

The Panthers traded up to get Benwikere, and it should be interesting to see how he performs in camp. The best-case scenario is that he can contribute right away, making the trade for him look very brilliant. If not, Carolina has the resources to move on and gradually develop him.

Analysis: There is no surprise here on special teams as far as the kicking and punting units are concerned. Gano and Nortman will be doing their part to help the Panthers when needed. With the latter being the holder on field goals, the idea of Carolina running a trick play is unlikely.

Barner and Brown may not be a part of the offense for much of the season, but they will star on special teams. Barner will replace the departed Ted Ginn Jr., and with any luck he will stay healthy and provide the kind of skills that made him a threat while at Oregon.

His partner in crime, Brown, will aid him on the field but should be the primary return man on punts. He did this while at Ohio State and could very well follow the same career trajectory as former Panther Steve Smith. He started out as a return specialist before moving into the offense on a permanent basis. With any luck, Brown may do just that.

Tiquan Underwood could get a look at special teams as well, but he hasn't fielded any kicks on a consistent basis since 2010 when he was in Jacksonville. However, he did return two last year with Tampa Bay.