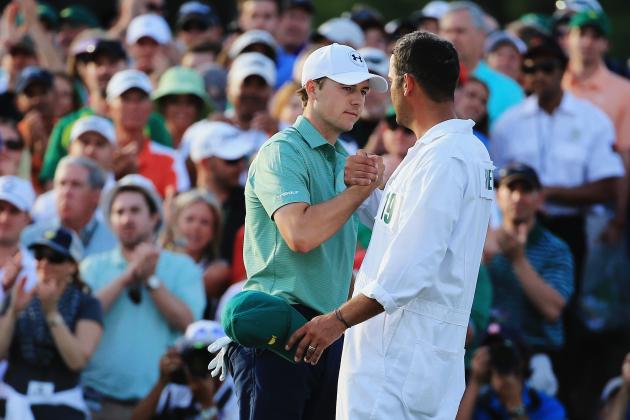 Watson was a wizard around Augusta National Golf Club from start to finish, posting a Sunday 69 for an eight-under par, 280.

He demolished par-fives with his gargantuan length and patented right to left fade that caused his ball to move like a parenthesis. His ability to not just visualize, but execute shots with creativity and precision distinguished him from this deep, prestigious field of players. Lastly, his short game was beyond sharp, posting 10 one-putts on the week and on some of the fastest, most deceptive greens in perhaps the entire country.

Although this was a Masters devoid of golf's No. 1 ranked player, Tiger Woods, for the first time in 20 years, there were special, unexpected storylines that continued to unravel throughout the year's first major.

There was a sneaky feeling that Fred Couples might contend as he has many times at Augusta, but nobody foresaw three players over the age of 50 finishing inside the top 25.

As much as Watson deserves the spotlight for winning his second green jacket, Jordan Spieth stole the show. The 20-year-old was tied for the 54-hole lead at his very first Masters and never posted a round over par, a feat that not even Bubba earned this week.

Perhaps most surprising of all, though, was not necessarily who was atop the leaderboard come Sunday afternoon, but who wasn't. Many of golf's most elite players, ranging from Phil Mickelson to Sergio Garcia and Dustin Johnson, missed the cut at the Masters.

Read on for the biggest surprises of the 2014 Masters.

With a three-shot lead Sunday at the Masters, Bubba Watson threw caution to the wind and attempted a shot that no one in their right mind ever should. It literally could've changed the outcome of the championship.

Behind a forest of trees, Watson ignored the cautious play to conservatively pitch out to the fairway and instead hit a risky, and dazzling, shot through an incredibly narrow gap of trees that sailed just over the water hazard, finally coming to rest just over the 15th green. Please understand—this wasn’t an “aggressive” play, it was a foolish play. Watson had the commentators fooled at first.

“He’s going to punch out,” said Masters commentator David Feherty as Watson approached his second shot at the par-5. Then suddenly, Feherty changed his tune.

Watson had the commentators, fans and likely his caddy shaking their heads as he reared back for a devastatingly difficult shot that was inherently unnecessary. The surprise isn't just that Watson took the risk, but that he actually pulled it off.

Last year, three Australians finished in the top five at the Masters; Adam Scott earned his first green jacket, Jason Day finished alone in third and Marc Leishman tied for fourth. Scott and Day alone have combined for five top 10 finishes at the Masters in the last three years.

Little bit of a different story in 2014.

Despite a strong start for Scott with an opening round 69, he quickly faded from contention after a four-over par 76 on Saturday. He’d finish tied for 14th at plus-one for the championship.

Jason Day, who’d been recovering from a thumb injury over the last six weeks, never looked sharp at Augusta. A pair of opening rounds over par immediately cast Day out of contention. He rebounded enough over the weekend to finish 21st at plus-two.

Before the championship began Thursday, Vegas Insider gave Scott and Day top five odds to win the 2014 Masters. It’s unlikely that the Aussie’s poor performances this week forebode future underachievement in major championships. But it’s remarkable how reliable these two Aussies appeared at the beginning of the week and then how rapidly they faded from relevance.

There were eight past Masters champions that missed the cut at Augusta this year, and 14 past major champions in all.

Phil Mickelson, who owns three green jackets and is a perennial favorite at Augusta, missed the weekend by a single stroke and never displayed the precision or touch that usually distinguishes him.

Sergio Garcia, who, until Thursday, led the PGA Tour in Scoring Average and had posted four top 10s in his last six events, was a complete no-show at Augusta.

Past Masters winners Charl Schwartzel (2011) and Zach Johnson (2007) had the momentum of terrific starts to 2014 headed into the Masters, but neither could summon the wherewithal to make it to the weekend, let alone contend.

Dustin Johnson may be the biggest surprise, and disappointment, of the bunch. Johnson had won once this season, carded a pair of runner-up finishes, earned 13th at Augusta last year and has a boatload of experience contending in majors. Undeniably one of the most versatile talents in golf, Johnson played himself out of the championship after the first day, posting a five-over par 77 followed by a mediocre 74 Friday.

After storming out of the gates Thursday, Miguel Angel Jimenez, AKA “the Mechanic,” looked like he’d played himself out of the Masters after a disastrous 76 Friday. Then on Saturday, he shaved 10 strokes off that previous day’s total, posting a tournament low score of 66 and vaulting into contention.

Jimenez was phenomenal Sunday, posting a 71 and finishing solo in fourth place.

Berhnard Langer (56) is a two-time Masters champ, (1985, 1993), but has missed the cut six of the last eight years at Augusta. Without an ounce of momentum heading into this year’s Masters, Langer proved relentless, never posting a round over 74 and carding a fantastic final round 69, elevating him to even for the championship and a tie for eighth place. He hadn’t finished in the top 10 in a major since 2005!

Fred Couples (54) has become a timeless presence at Augusta and this week marked his 30th Masters. Despite the magic he’s been able to conjure so consistently there over the years—he’s posted 11 top 10 finishes, including his lone victory in 1992—he was still a long shot in relation to the deep field this week.

Sure enough, Couples not only hung around, he finished in a tie for 21st at plus-two for the championship.

"It's about time that I need to kind of step up and start playing well on the weekends, especially at majors," Rickie Fowler told Max Adler of Golf Digest said after his round Saturday at the Masters.

Yes, Rickie, it is about time. And perhaps about time you consult a mirror before walking outside.

The 25-year-old had played 15 major championships before the 2014 Masters, and in that time had earned just a pair of top 10 finishes. With just a single victory to his name in nearly five years on the PGA Tour, Fowler has underachieved based on his original hype. Despite showing glimpses of his potential to be an elite golfer, Fowler hasn't proven that he could contend on a consistent basis or produce convincingly under the spotlight of a major championship.

This Masters, however, was Fowler’s coming-out party.

His opening round 71 left him just a few strokes off the lead, but then a troublesome 75 Friday was rightful cause for concern. Then Fowler rebounded, posting one of the lowest rounds of the championship on Saturday with a five-under par 67. He had shown all the signs of skill and poise over the previous three days to propel himself into the conversation for a Sunday surge at the green jacket.

While the Masters victory didn't come to fruition, Fowler's fifth-place ranking is finally fitting for the up and comer.

To all of the non-believers who assumed that 20-year-old Jordan Speith’s skills wouldn’t translate to the big stage of a major championship, check out the leaderboard.

The Masters rookie who was an amateur just over a year ago finished in a tie for second at the Masters. If that weren't enough, Spieth has already won on the PGA Tour and he's participated on the United States President's Cup Team.

What had you accomplished at the age of 20?

After holding the 54-hole lead, there was an odd Rory McIlroy circa 2011 atmosphere hinting at Spieth's collapse Sunday as he attempted to become the youngest ever Masters champion, a record held by Tiger Woods, who was 21 when he won in 1997.

Sure enough, Sunday was a battle for Spieth. He was dealing with his own nerves and struggling with the bull that is Augusta National. But he emerged unscathed after 18 grueling holes and posted an even-par 72. Four consecutive rounds of even par or better is a feat not even accomplished by this year's winner, Bubba Watson.

Before Sunday, Bill Pennington of The New York Times didn't need to see Spieth's final round to crown him the player most likely to be Tiger Woods' successor. For those who may have not believed it before the final round, like me, it'd be best to reconsider.

The kid is here to stay.

Jeff Knox just got to live the dream.

According to the Masters rules, the top 50 players and ties make it to the weekend of the championship, and in this particular event, the final number of players just so happened to be odd number.

Knox played Saturday, moving day at the Masters, alongside two-time major champion Rory McIlroy, who just so happened to be the odd man out without a partner after making the cut on the number.

Knox was no slouch, beating McIlroy by a stroke after a two-under par, 70.

OK, so you've heard of Jordan Spieth, who just finished second behind Bubba Watson at the Masters. But what about Jonas Blixt, Jimmy Walker or Kevin Stadler?

Blixt didn't post a single round over par at Augusta, finishing five-under par and three shots behind Watson. This was just his third major championship of his career and owns one other top-five finish from last year's PGA Championship. The two-time PGA Tour winner will not be overlooked going forward.

Not many 35-year-olds are considered rookies, but Jimmy Walker likely doesn't mind the title after his excellent performance at his inaugural Masters. He finished even-par for the championship and in a tie for eighth. The three-time PGA Tour winner has burst onto the scene over the last year and is undeniably a force to be reckoned with.

Kevin Stadler is a near mirror image of his father and 1982 Masters champ, Craig Stadler, and this week took a few pointers from him to finish in eighth with Walker. Stadler played with poise throughout, showing some especially crafty touch around Augusta's deceptive greens.