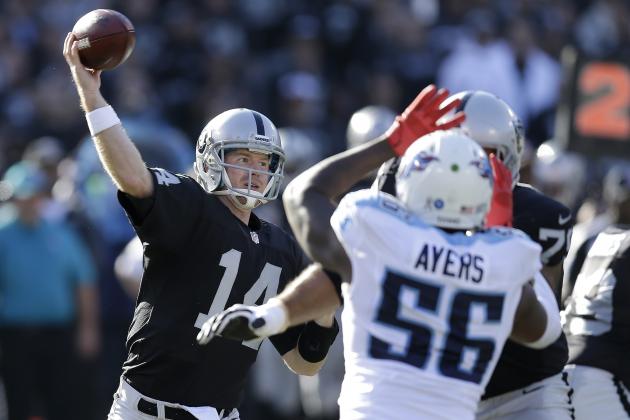 The Oakland Raiders are in need of a franchise quarterback, and they won't win until they find one.

With a quarterback class as deep as 2014's, it's easy to drool over the possibility of drafting a brand-new signal-caller. But for the Raiders, that needn't be the response.

Not in the first round, at least.

The Raiders already have a young, talented quarterback in Matt McGloin. Despite his 1-5 record last year, he played well enough to be considered for the starting job.

The red-headed kid from Scranton, Pa., started his career the right way after leading the Raiders to a 28-23 win over the Houston Texans in Week 11, a game where he threw three touchdown passes, including a 26-yard strike that got Kevin Harlan out of his seat.

After a heart-breaking loss to the Tennessee Titans the following week, the Raiders defense fell off the face of the earth, and McGloin's victories stopped because of it.

But it's not his fault the Raiders' defense gave up nearly 35 points per game over his last five starts.

Should Matt McGloin be the Starter for the Oakland Raiders in 2014?

Should Matt McGloin be the Starter for the Oakland Raiders in 2014?

With McGloin at the helm, Oakland's offense averaged a touchdown more per game than it did when Terrelle Pryor or Matt Flynn was starting.

His calm demeanor in the pocket was impressive, as was his ability to move the chains.

Unfortunately for McGloin, he didn't do enough to win the trust of head coach Dennis Allen, according to ESPN.com's Paul Gutierrez.

When asked at the NFL combine if next year's starting quarterback was on the roster, Allen said he didn't know, via Chris Wesseling of NFL.com.

It's a shame, really. With the exception of one bad game against the Kansas City Chiefs, McGloin had a solid year.

Considering the lack of talent around him, combined with the defense blowing multiple leads, the Raiders could've finished the year with seven wins with McGloin under center.

He may not be the long-term solution, but McGloin did more than enough to be kept in the mix for next season.

Get the kid a solid No. 1 receiver and a line that can actually block, and the Raiders could be in for a real treat.