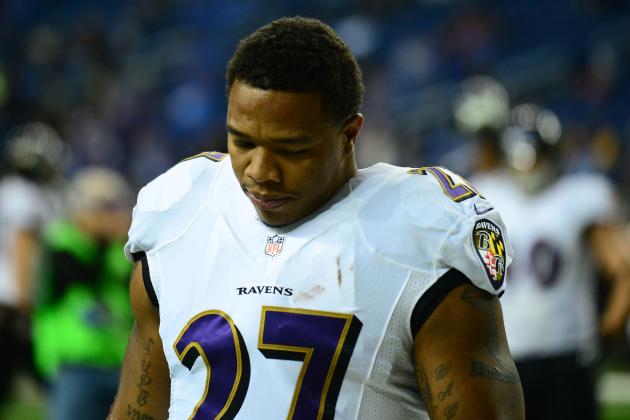 Andrew Weber-USA TODAY Sports
Ray Rice is in a whirlwind of controversy after being arrested Saturday
2.7K
Reads
12
Comments

Baltimore Ravens running back Ray Rice had a season to forget after finishing with just 660 yards in 2013.

Now, his offseason looks to be far worse than just a bad week at the office.

Rice and his fiancee, Janay Palmer, were both arrested Saturday for simple assault after a "minor physical altercation," according to a report obtained by ESPN's Jamison Hensley.

Now, it seems there is even more to the story than originally reported. If you thought Rice's regular season was bad, it appears to be nothing more than a blemish as to what he could possibly be facing now.

According to a summons obtained by Chris Littmann of Sporting News, Rice allegedly struck Palmer so hard, he rendered her unconscious.

Rice has gained a reputation of being one of the best running backs in the NFL (sans last year, of course), despite possessing a stature of just 5'8".

With a clean rap sheet, as well as a million-dollar smile that beamed brighter than the lights he played under, Rice was seen as one of the NFL's good guys.

It's apparent now, more than ever, that his reputation may have taken a serious blow, and it's unclear when (or if) he will be forgiven by the fans.

In a society where second chances are given away like candy on Halloween, I'm sure Rice will one day gain the respect of the fans, as well as his fellow players—even if he is found guilty. But it won't be easy.

The Baltimore Ravens are now in a lose-lose situation after this whole fiasco. If they keep Rice, they're sure to face the never-ending scrutiny for keeping an alleged woman-beater on the roster.

If they cut him for the sake of protecting their image, they'll lose their best player.

At just 3.1 yards per carry and only four touchdowns last season, Rice was already in a tough situation. Now that all this has happened, the Ravens may very well cut ties with their prized running back who was supposed to be one of the good guys.

The Ravens lose no matter how this plays out, and it's possible that Rice has nobody to thank but himself.