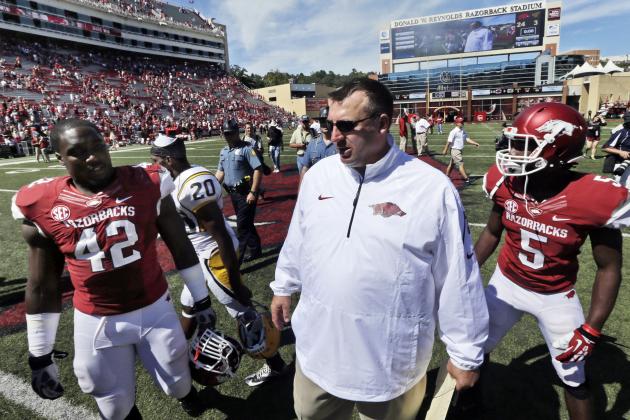 National signing day is just days away and the Arkansas Razorbacks are looking to close out the 2014 recruiting class on a positive note.

This Thursday on February 5, prospects across the country will announce their college destinations and many programs will be battling with each other for signatures. The Hogs and head coach Bret Bielema have several prospects they will be battling over with other schools. If they can win those battles, Arkansas will have a very solid class.

Losing recruiting battles can take some wind out of the sails, such as in November when the Hogs lost to Alabama for the services of Josh Frazier, one of the Natural State's best prospects. Arkansas has lost plenty of recruiting battles over the years, but it has also won its fair share of them, too.

Here is a breakdown of the Razorbacks' top three recruits they will be battling over on Feb. 5.

All player rankings courtesy of 247Sports.com.

Hailing from Tucson, Ariz., 3-star offensive tackle Andrew Mike looks like a lineman you would expect to see on a Bielema-coached team. At 6'7", 270 pounds, Mike is a mammoth of a man who, with some coaching, has the potential to be an All-SEC performer.

Though he hasn't officially trimmed his list to a final three, the consensus is that he will be deciding from Arizona, Arkansas and Florida. His 247Sports Crystal Ball Predictions have 64 percent choosing him to pick the Razorbacks and since the beginning of the new year, that percentage has skyrocketed. He visited Fayetteville, Ark., on Jan. 17, followed by a trip to Gainesville, Fla., on the 24.

Mike's size and frame makes him a prime O-line prospect. He has a good punch and is a good run blocker. However, he has to work a lot on his pass-blocking skills, footwork and quickness off the snap if he wants to be a dominant lineman.

If Arkansas can land his services, Mike will be able to hone his skills under O-line coach Sam Pittman, who is regarded as one of the best in the country.

The highest on the Hogs' national signing day wish list is 5-star defensive end Solomon Thomas. Thomas has the skills to make an immediate impact in his freshman season for whichever school he decides to attend.

If you go by his 247Sports Crystal Ball Predictions, Stanford is most likely to win his services with 88 percent of the experts picking him to choose the Cardinal.

But don't write off the Hogs.

According to HawgSports.com's Big Red Board (subscription required), "Arkansas appears to be in great shape" to get his signature on Feb. 5. Unlike Stanford, Thomas had family ties to Arkansas as he has a sister that attends the U of A. His father also does business around Northwest Arkansas and the Fayetteville area.

Thomas has a great frame at 6'2", 258 pounds. He is good in all phases, particularly at the point of attack and with his very quick hands. His first step and closing speed are good, but with some coaching, he can improve both and become an elite pass-rusher.

The Razorbacks got the last crack at him on Jan. 25, which can only be a positive since it is fresh in his mind. Thomas had only good things (subscription required) to say about his official visit to The Hill, so the Razorbacks seem to have a very good chance at landing him on signing day.

Though 4-star wide receiver Jojo Robinson committed to Florida State in the summer of 2012, it is considered a soft verbal. In fact, most think the Hogs have a great shot at flipping him on Feb. 5.

His Crystal Ball Predictions have a resounding 95 percent betting on him to call the Hogs, which has to mean something for a guy that is considered to be committed to another school. There's always that chance Robinson decides to stay with his pledge, but Arkansas looks to be in terrific shape to land his services on signing day. He raved (subscription required) about his visit on Jan. 24.

Robinson is a very good athlete with natural speed. One of the most important parts of a wideout's game is his ball skills and Robinson has them. He has soft hands and routinely makes difficult catches. He played multiple positions in high school, which speaks to his versatility and athleticism. Robinson can work on his explosiveness off the line and change of direction, but he's another immediate impact player.

Don't be surprised at all if he chooses to flip to the Hogs on signing day, which would be a huge addition to Arkansas' class.