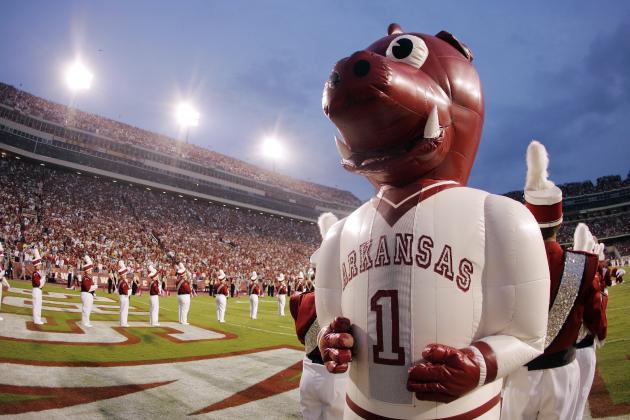 It's hard to believe that 2014 national signing day is only 23 days away. It seems like it was just yesterday that Alex Collins' national letter of intent to the Arkansas Razorbacks was swiped away by his mom because she wasn't happy with his decision to pick the Hogs over the hometown Miami Hurricanes.

He eventually signed it and sent it over to head coach Bret Bielema, who was thrilled to land one of the nation's top-rated running backs. It was a huge get for the Razorbacks last year on NSD, a day that can change the fortunes of a class with big-time commits like Collins.

Arkansas currently has 20 commitments for the class of 2014. Even though NSD is very close, Bielema and his staff are hard at work on the recruiting trail.

Closing is extremely important in recruiting, and there are several prospects the Hogs must land come February 5. Here's a look at three must-land recruits for Arkansas, as well as some other important prospects.

Linebacker is a huge need for Arkansas in the '14 recruiting class, and there are currently two commits on board, Khalia Hackett and Dwayne Eugene. Both are listed as safeties, but according to HawgSports.com's Big Red Board (subscription required), the Hogs will use them as linebackers.

Bielema still needs to sign at least one more linebacker in this class, and 3-star Randy Ramsey, a Fort Lauderdale native, looks to be the top remaining on the board.

Ramsey will have to add some weight at the next level—he's currently listed at 6'2" and 205 pounds—and improve upon his skill set. Though he has flown under the radar, Ramsey has very good athleticism and speed, two things the Hogs could use at the position.

He visited North Carolina State on Nov. 1 and is scheduled to make an official visit to Fayetteville on Jan. 24. It's good to be the last visit for a recruit because the visit sticks in his mind and gives a program a chance to make the last impressions before a decision is made.

Ramsey has a lot of potential. With some coaching, he could be a valuable player in the future.

Like the linebackers, the Hogs need a lot of help in the secondary.

Bielema is looking to add one more corner, and the top target is 3-star Cornelius Floyd.

Hailing from Miami, Floyd is yet another Floridian the Hogs are after. At 6'1" and 190 pounds, Floyd is a big, physical corner who fits what Bielema is looking for. A big problem for the Razorbacks in 2013 was that their corners weren't physical enough in coverage, something Floyd could help out with.

He is solid in man coverage and has the speed you expect from a corner. With some coaching, he could become a key player down the road.

He is scheduled to make his official visit this weekend on Jan. 17, followed by West Virginia on Jan. 24. His visit to The Hill will be a huge determining factor in his decision, as will his visit to the Mountaineers a week after. Keep an eye on him leading up to national signing day.

The biggest need on offense is at wide receiver. Arkansas returns just two players that finished the year with over 100 yards receiving in Keon Hatcher and tight end Hunter Henry.

As a result of that need, Bielema has four commits for the '14 class at the position, 3-stars Jared Cornelius, Cody Hollister, Corey McBride and Torrance Mosley. Even with four on board, the Hogs can use another wideout in this class.

The top one is highly rated 3-star Kendrick Edwards.

Edwards is extremely difficult to defend due to his 6'6", 205-pound frame. The last time the Hogs had a receiver with that kind of size was Marcus Monk, who had a very good career.

Though he doesn't possess burning speed, Edwards has great hands. His size gives him a distinct advantage because he is able to literally grab footballs over defensive backs.

He can stand to get better at route running, but having a receiver with Edwards' size would be a huge boost for Arkansas.

247 Sports' Crystal Ball Predictions has the Hogs landing Edwards, though anything can happen. He will be making his official visit to Arkansas on Jan. 24, a day that will be huge for recruiting.

Arkansas has been making a big push for 4-star defensive end Demetrius Jackson. Jackson briefly de-committed from Miami then recommitted on Dec. 9. He doesn't have an official visit set for Arkansas.

But though he's committed to Miami, things could change in the next few weeks.

The Hogs are holding out hope for 4-stars Frank Ragnow (OL) and Kenny Young (LB). Richard Davenport of WholeHogSports.com reported Ragnow called his visit to Arkansas "awesome," but it appears he is leaning toward staying in his home state of Minnesota or playing for the national champion Florida State Seminoles.

Young is one of the best linebackers in the country and is scheduled to visit on Jan. 17. Davenport wrote that he has been very impressed by the Arkansas fans and coaches, particularly linebackers coach Randy Shannon, who coached his cousin LaRon Byrd at Miami.

The Razorbacks are also hoping they can land the services of 4-star defensive end Solomon Thomas. According to HawgSports.com's Big Red Board, he has a sister who attends Arkansas and his father does business around the Fayetteville area.

Over the next few weeks, follow these recruits. The Hogs should be in the mix for their services.

Bryan Heater is the featured columnist for the Arkansas Razorbacks football team. Follow him on Twitter @BHeaterRivals.